A love letter to our readers. 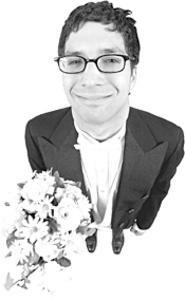 We love you, dearest reader, and want to have your baby.
Dear Reader:

'Tis 35 years since we first embraced. It was 1970 when our eyes locked from across the room.

You? You were smart, handsome, vivacious, courtly, quick of wit, and kind of tongue -- though what was up with that hair?

Us? Well, we were pretty much drunks who couldn't get real jobs. But you called us to your bosom, lacquered us with tenderness and shots of off-brand whiskey. Your undiscriminating taste -- that's always been the great thing about you.

It was love at first sight. Okay, maybe it was just a convenient union between two parties lacking preferable options. But let's go with the love theory anyway. It sounds better.

Over the years, you sustained us. Without your encouragement, support, and ceaseless coos of praise, there would be no Scene. Whenever we were down, you applauded our "sensationalism," extolled our "unsound arguments loaded with inaccuracies and bias," exalted our "unbalanced and sloppy journalism." Your confidence, your devotion, this was all that mattered.

Whenever we had a hard day, toiling in the harsh fields of non-Pulitzer Prize-winning journalism, you were always there with a compliment. "Uninformed moron." "Incredibly dumb." "Media-know-it-all pencilnecks." These were the words that renewed us, like a fresh spring rain or perhaps an 8-ball of uncut Bolivian coke.

Now, on our 35th anniversary, we've pulled out all your old love letters, those romantic epistles you so fondly penned each week. Remember this one?

"Deprived of any opportunity for outrage, all you could fall back on was reflexive alt-weekly snarkiness . . . By coupling it with mendacious cover art, whose only purpose is to lure readers to a minor story in an editorial version of bait-and-switch, it trivializes genuine incidents of intolerance and betrays your own juvenile lack of seriousness."

We never could figure out what "mendacious" meant -- is that a suburb of Oakland? -- but love's sweet words need no translation. Allow us to pause for a moment while the candied tears of joy bedew our countenance.

You were always there to offer wise counsel: "We don't need a bunch of smart-ass newspaper writers constantly distorting the truth."

You knew the production of shallow and intemperate prose was a grueling task, and your only concern was for health sustained, so our love could ripen to fullness of years, at which point we could hang out in a nursing home, where they always have good Jell-O.

Yes, at times we were intimate: "Your selling sex is a terrible sin, equal to sexual abuse and homosexuality. I am currently contacting the advertisers in this immoral paper to let them know of my disgust with the ads in the back."

At times -- dare I say it -- you were jealous: "What the fuck? I can't believe you would go and run your mouth like a little immature girl that just kissed her first boy."

And at times your lust seethed from printed page as if you were a loin-swelled gorilla from the jungles of Arkansas, or wherever they keep the gorillas at: "Perhaps someday a towelhead will come by, yelling 'Death to the infidel,' shove an RPG up yours, and blow your brains out."

Modesty prevents us from speaking further. Remember, dear one, there are children reading. Suffice it to say our loins swelled too, like Carlos Boozer's at first sight of his Utah contract.

So many times we watched the phone, the embers of day having yielded to darkness, pensively waiting for that melodious entreaty to romance -- "You suck!" -- to come over the wires.

Sure, you had your dalliances. You kept time with The Plain Dealer, but she was a gnarly old hag who made you watch Golden Girls. You traded tender touch and sugared words with the Beacon Journal, which was like dating a tire salesman. At times, in the small hours of the night, beer goggles bending your vision, you even bedded the Free Times behind a dumpster outside the Harbor Inn. Then you became acquainted with two very important words -- "statutory rape" -- and found your way back to our loving arms.

Okay, so we may have strayed as well. Okay, so it might have been with anybody who had an open tab and a few quarters for the jukebox. But you didn't call. We were lonely. Is that such a crime?

Yet that's all behind us now, is it not, dear one? For though we've fought, bickered, baited, bludgeoned, and battled -- help me, I'm running out of verbs here -- we've always returned to each other's embrace.

Whenever we truly needed you -- like that time we ran a cover story on guys from outer space; Christ, what were we thinking? -- you stood by our side, held our hand, calmed us with delicate words of encouragement: "Are you absolutely daft?"

For 35 years, you've been our rock, our mountain, or at least a really big pile of corrugated steel that would be hard to move, unless you hired some guys named Magnus from the World's Strongest Man Competition or something. After all, without you, there would be no Scene, which means we'd have no jobs, which means we'd be breaking into your apartment as we speak.

So allow us to conclude with the only words that can encapsulate our devotion:

We love you, dear reader, and want to have your baby.