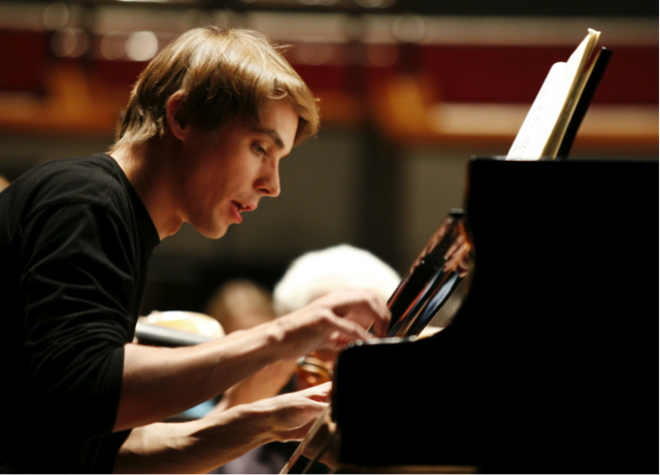 Cédric Tiberghien by Benjamin Ealovega
German composer-conductor Matthias Pintscher visits The Cleveland Orchestra this week with one of the most varied programs of the Severance Hall season. It begins with Pintscher’s own Ex Nihilo, a twelve-minute score that reflects his all-too-common experience of “waking up jetlagged in a foreign city, eyes starting to see shapes in the hotel darkness.” French pianist Cédric Tiberghien will solo in Camille Saint-Saëns’s Piano Concerto No. 5, “Egyptian,” and Pintscher and the Orchestra will finish up the program with Arnold Schoenberg’s Chamber Symphony No. 2 and Claude Debussy’s impressionist seascape La Mer. Concerts begin on Thursday, February 23 at 7:30 pm and continue on Friday, February 24 at 11:00 am (without the Schoenberg), and Saturday, February 25 at 8:00 pm. Tickets here.

If you haven’t yet celebrated the centennial of jazz legend and pioneer Thelonious Monk, the True North Big Band will play some of his most beloved compositions in Trinity Hall of John Knox Presbyterian Church in North Olmsted on Friday, February 24 at 7:00 pm. It’s part of the John Knox Performance Series, and it’s free, though contributions are welcome.

20th-century French composer Francis Poulenc often wrote music with his tongue firmly in his cheek, but his opera The Dialogues of the Carmelites tells the story of the Carmelite nuns who were sent to the guillotine in 1794 during the Reign of Terror for refusing to renounce their vocation. Baldwin Wallace Opera Theater will produce four performances of this 1956 masterwork at the Kleist Center in Berea from Thursday through Saturday, February 23-25 at 7:30 pm, and on Sunday, February 26 at 2:00 pm. Scott Skiba directs, and tickets are available online.

Contemporary vocal music is the theme when the Oberlin Contemporary Music Ensemble makes its next visit to the Cleveland Museum of Art on Sunday, February 26 at 2:00 pm. Gregory Ristow guest conducts the ensemble of singers and instrumentalists in Harrison Birtwistle’s Entr’actes and Sappho Fragments for soprano and ensemble, as well as Stephen Hartke’s Tituli for five solo male voices, violin, and two percussionists. Tickets for the concert in Gartner Auditorium are available online.

And on Oberlin’s home turf, the next Artist Recital Series concert will feature Toronto’s esteemed Tafelmusik Baroque Orchestra in “J.S. Bach: The Circle of Creation.” This multimedia creation combines music, text, and projected video and images to explore the world of the artisans — papermakers, violin carvers, string spinners, and performers — who helped J.S. Bach realize his musical genius. The concert is at 8:00 pm on Tuesday, February 28 in Finney Chapel. Tickets are available online.