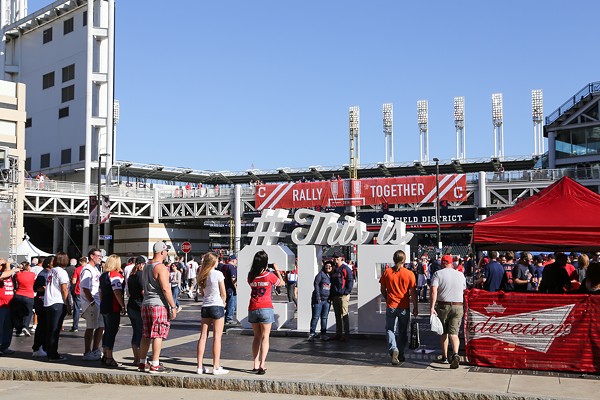 Emanuel Wallace
I am from Chicago; I now live in Northeast Ohio. And the Cubs are playing the Indians in the World Series. So I have a serious dilemma. I don’t regularly follow baseball and therefore need to jump on a bandwagon, but which bandwagon do I choose? The bandwagon that was my home for 14 consecutive years, or the bandwagon of my new hometown?

I’ve thought about this a lot and there are many factors to consider when making this decision.

· Underdog status – Cleveland is the underdog in this contest because the world loves the Cubs. Chicago-based TV station WGN broadcasts Cubs games nationally, so people hundreds of miles away from Chicago may enjoy the exquisite agony of watching the Cubs lose. The Cubs also have won the most games in major league baseball this year, meaning the odds makers in Vegas are putting their money squarely on the Cubbies. So Cleveland is just where it wants to be, just where it’s comfortable, living the dream as the underappreciated underdog. Cleveland vs. the world is a position that Cleveland is used to and, based on recent history, a position where Cleveland thrives. Advantage: Indians.

· Baseball Stadium – Progressive field provides impressive views of downtown Cleveland. Entering the stadium through Gate C offers a dramatic view of the park itself, and Progressive Field is built to offer every modern amenity a fan could want. Wrigley Field, on the other hand, prides itself on standing apart from time. The additions of lights in 1988 and a Jumbotron in 2016 were met with loud protests, but some things remain the same – the scoreboard is occupied by a man who physically updates the numbers by hand, and in the men's restroom there are no urinals but instead a large pee troughs. However, what Wrigley Field creates in terms of quiet reverence for the past is completely obliterated by the surrounding neighborhood, Wrigleyville, which I can only describe as fuckboy ground zero. Take everyone you hated in high school and college, make them extremely sunburned and drunk, and stick them in a Irish bar at last call and you have the basic flavor of Wrigleyville. I cannot describe the horror of riding the Red Line north from downtown, approaching the Addison stop outside of Wrigleyville, and realizing that a Cubs game just let out and I was about to be crushed by a group of intoxicated, screaming men and women who would love nothing more than to celebrate their dear Cubbies by yelling "There's my future ex-wife!" at each other, fist fighting a stranger, and/or puking in my lap. Advantage: Indians.

· Mascot – The Cubs mascot is a tiny child bear who no one in the world has a single problem with. The Indians mascot is Chief Wahoo who is, empirically, a racist caricature. If you don’t see that Chief Wahoo is a racist caricature, then just pretend that the mascot was some other type of human, one who you enjoy. Like your dad. What if the team’s mascot was your dad and the team logo was a caricature of your dad drawn by someone who hates him. It’s your beloved dad, only he’s pictured wearing a dirty bathrobe and yelling at the newspaper circular about why milk costs so goddamn much. Point is, Chief Wahoo is not a flattering portrayal of a human being. I know we have good feelings about the logo because of our personal history with the Indians and our grandfather who introduced us to baseball and our love of the logo isn’t intended to be mean or dismissive of an entire race of people and, besides, we don’t know a single Native Americans who are personally offended, but that’s mostly due to the super effective genocide our ancestors perpetrated against them. We need to admit that, like may things that are old fashioned and historic, the Chief Wahoo logo is also gross and we now know better. Advantage: Cubs.

· Length of the Drought – The Cubs have not won a world series in 108 years, while the Indians have not won a world series in 68 years. The Cubs have not even made it to the World Series since 1945, while the Indians’ last appearance was in 1997. But let’s widen the lens: the city of Chicago has not won a National championship since 2015, when the Blackhawks won the Stanley Cup. The city of Cleveland has not won a championship since…June. And we loved it and now we know what it tastes like we want to eat it for every single meal every single day. Plus, a Cubs win is a known sign of the apocalypse, which no one is into. Advantage: Indians.

· Fans –When the Chicago White Sox won the World Series, a friend of mine who was a huge Cubs fan remarked disdainfully, “I bet not even one person will die tonight.” He was saying that Sox fans aren’t real fans, not in the way Cubs fans are, because they won’t celebrate their World Series win with violence and mayhem. If the Cubs win the World Series it’s possible that no one will die, but it’s also possible that Cubs fans will gather on the corner of Addison and Clark to legit murder each other out of sheer manic happiness. Those who are being murdered will likely think, “Worth it,” but riots based in elation are still, technically, riots. Meanwhile, in Cleveland, when the Cavaliers won the NBA National Championship we showed the world that in Cleveland we handle our shit gracefully. We can explode with happiness and dangle off of parking garages to catch a glimpse of our team without allowing our joy to overwhelm us to the point that we forget that we should keep our hands to ourselves, unless we’re engaging in a tasteful and fully consensual high five. Advantage: Indians.

· Bill Murray – If the Cubs win, Bill Murray will cry tears of pure, gorgeous joy. I adore Bill Murray and want anything that makes him happy. Advantage: Cubs.

· Divorce – My husband said during last night's game, and I quote, “If you root for the Cubs we’re getting a divorce.” Advantage: Indians.