A B-W grad makes a go of a pro racquetball career. 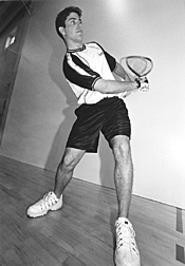 Walter Novak
Shane Vanderson: "Sometimes I get a little sick of saying it's not all about the money."
Splash and Wall Street, two big movies in the 1980s, feature racquetball scenes. Actually, in Wall Street, the devious stock-trader Gordon Gekko routs his acolyte in a game of squash. Nonetheless, both movies reflected the day's gusto for racket sports played in cubes.

For Shane Vanderson, a recent graduate of Baldwin-Wallace College, who plays racquetball for pay, a key word in the above paragraph is "1980s." The sport's popularity peaked at a time when Daryl Hannah was celebrated for her sex appeal, not her kitsch value; the former JFK Jr. escort can now be seen wearing an eye patch in the slice-'em-up Kill Bill.

Vanderson, 22, hopes racquetball can find its Tarantino or Chris Peters, the Microsoft executive who led a group that bought the professional bowling tour, two-tone shoes and all. Pro bowlers roll for around $200,000 every week; a racquetball tour event is considered first tier if it offers a $15,000 pot. Vanderson, though, needs no one to point out the disparity. "Sometimes I get a little sick of saying it's not all about the money," he says.

Vanderson turned professional in the spring, after an accomplished amateur career. He won an intercollegiate championship and qualified for the national team, only to have B-W's stringent attendance policy keep him from the Tournament of the Americas in Bolivia. (In protest, Vanderson stopped buying textbooks. He says he still managed a 3.2 grade-point average.)

As a pro, Vanderson takes to the road about every other weekend, competing in places as far afield as Casper, Wyoming. He ranks 12th among International Racquetball Tour players after reaching the semifinals of the recent U.S. Open.

With few attachments (he shares a Middleburg Heights apartment with a college pal) and a racket manufacturer paying his air fare, Vanderson doesn't need much to keep going. "If I win one match at a pro stop, I'll at least break even or walk away with $100," he says.

Vanderson grew up in a house of jocks. His father, Gary, coached football, tennis, and wrestling at a Columbus high school. An older half-brother is a soccer player-turned-bodybuilder. Shane picked up his first racket at age 3, while tagging along to Dad's athletic club. "He hated the nursery," Gary says.

Father says Shane always displayed an unusual aptitude for sports in which stick meets spherical object. He played baseball in high school and golf during his first two years at B-W. In racquetball, however, Vanderson found the sweetest spot, winning seven junior world titles. Not that his high-school classmates cared. They named another guy -- a lacrosse player, no less -- the best athlete in the building. "It was like 'What do I have to do?'" Vanderson says.

Sensing that obscurity, many of the game's top juniors gravitate toward more visible sports. Jeff Conine, twice a World Series champion with the Florida Marlins, was an excellent racquetball player in his youth. He chose wisely in pursuing baseball: In his 13th year in the majors, Conine earned $4.25 million and rode in a parade. The professional golf tour minted 72 millionaires this season.

Vanderson, though, was merely adept at baseball, golf, and running 800 meters. Racquetball is his gift. "It's one thing to be good at something," his dad says. "It's another to be the best in the world, even if it's tiddledywinks."

Vanderson played for tiddledywinks at the Kickoff Classic, an event held in September at the Solon Athletic Club, which drew several dozen of the region's best pros and amateurs. An 18-year-old Canadian entrant sported a racket-and-ball tattoo on his calf. Top prize: $500.

Vanderson was paired in the first round with a club player reduced easily to pants and grunts. Gliding alongside the clear back wall, Vanderson resembled an unemotional drill sergeant, pacing placidly behind a fatiguing troop of one. His backhand is an especially punishing calisthenic.

The racquetball circuit is collegial but competitive. Players grab beers together while on the road, but the scarcity of prize money makes top talent wary of anyone who may be gaining ground. "They're happy to buy you drinks and get you drunk," Vanderson says. "They're not about to tell you what their training regimen is."

Vanderson's relaxed manner, on and off the court, has made him popular, even among older players who might resent his talent. "Nothing rattles Shane," says Merle Walker, the vice president of the Ohio Racquetball Association. "He's very calm. He is never out of a match, because his psyche doesn't allow it."

Also in Vanderson's favor: signs of a racquetball rebound. The sport's U.S. Open has sold out of entry spaces for the last three years. The new Tennis Channel needs programming. A made-for-TV portable court can take the game out of the gym. "The guys who are going to benefit are Shane's age," says Doug Ganim, the president of the Ohio Racquetball Association and former top-10 player.

A Solon native removed to Columbus, Ganim pursued an MBA rather than a pro career when he was in Vanderson's position 15 years ago. Ganim has done well, selling racquetball equipment and running tournaments. He's encouraged Vanderson to pursue a graduate degree, in preparation for the inevitable day when competing doesn't cover the bills. But Ganim also knows that athletes are young only once.

Vanderson says racquetball has taken him places and introduced him to people he would not have seen or met otherwise.

Of course, cash would be nice, too. "It's a little depressing when you see some athlete holding out for a few million, and I'm scrounging around for rent money," Vanderson says.