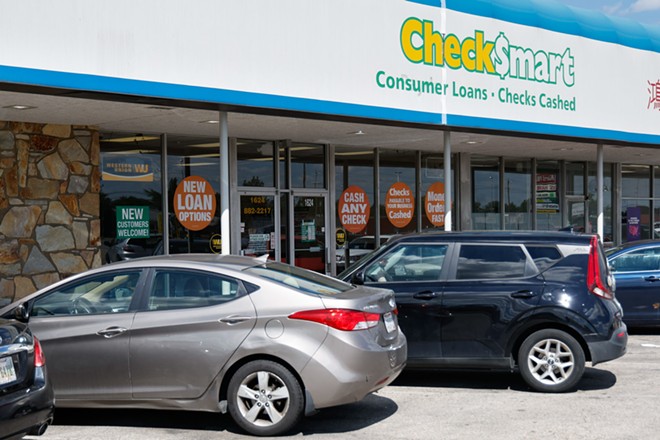 A Canton man borrowed $300 just as businesses began to close in the pandemic. He said he paid $780 on the loan with another $300 due.

A Patsakala man said he paid off his $300 loan when he learned about a surprise $150 monthly fee.

The three customers, plus several dozen others, have complained to Ohio Attorney General Dave Yost in the last few years about predatory payday lending practices out of CheckSmart storefronts.

In October 2018, state lawmakers passed legislation imposing interest rate caps and fee limits on payday lending — short-term, sub-$1,000 loans that are automatically repaid out of one’s next paycheck. The loans, often to poor borrowers with bad credit and few alternatives for capital, have a history of leaving customers in a cycle of taking out more and more debt to keep up.

The complaints indicate the loans kept going out even after the new law took effect. CheckSmart claims its relationship with Green Bear Ohio, which issues the loans, ended in June 2020.

Yost, a Republican, hasn’t acted against the companies. In both a letter to Rep. Kyle Koehler, the Republican sponsor of the 2018 crackdown, and in response to media inquiries, Yost has refused to say whether he’s investigating CheckSmart or Green Bear.

Based on the consumer complaints and the judicial ruling, the loans work like this: A customer walks into a CheckSmart storefront and asks to borrow $500. Green Bear (under the name Crestline Finance) lends the money, but places an additional $501 in “security” that the customer doesn’t access or control. The lenders charge interest on both the borrowed funds and the ‘security.’

A CheckSmart affiliate, Insight Capital, buys the debts and acts as a collector by suing the borrowers if they default. A CheckSmart spokesman said this was part of an “effort to maintain jobs and drive another source of revenue.” Franklin County Municipal Court alone shows hundreds of lawsuits filed by Insight Capital over the last few years.

Judge Thomas found that the companies devised this “convoluted” scheme to profiteer, and to evade consumer protections on payday loans by inching over the $1,000 ceiling and operating under Ohio’s more lender-friendly mortgage loan laws.

Koehler made similar claims in a letter to Yost last summer.

“I am concerned that these loans may not comply with Ohio law or may constitute evasive, unfair, or deceptive acts and practices,” Koehler said.

“This growing pattern of potential misconduct not only creates a hostile and unfair business environment for law-abiding lenders, but harms the Ohioans who have fallen prey to these predatory practices.”

Yost responded a month later calling Koehler’s description an “accurate representation of the majority of the consumer complaints” but offering no specific actions he’s taking in response.

“The consumer said she didn’t agree to these terms,” the complaint states.

Nate Coffman, executive director of the Community Development Corporation, lobbied for the 2018 payday lending reform. In the big picture, he said, the law worked. Citing a Pew report, he said the total cost for a payday loan has plummeted since it took effect.

He called CheckSmart a “rogue company” defying the laws and issuing “phantom lines of credit” to profit off poor Ohioans. What’s needed is enforcement.

“What we’re talking about here is, they’re flying directly in the face of the law,” he said. “This is an excellent opportunity for the attorney general to dig deep into this issue and say to rogue operators, we’re not going to tolerate this activity in Ohio.”

Mikaela Hunt, a spokeswoman for the Division of Financial Institutions, said the department is “aware of the company and product” but said she cannot legally disclose “examination information or investigation information” about Green Bear.

Community Choice Financial operates 484 CheckSmart stores, including 111 in Ohio, according to a recent financial statement. It paid its CEO William Saunders more than $2.6 million in 2019, including $58,000 on personal use of the company plane.

Both Saunders and his Dublin-based company spent heavily to oppose the 2018 legislation.

The bill had stalled out through much of 2017, but took on new life after then-Speaker Cliff Rosenberger resigned amid a criminal investigation of his financial relationships with other payday lending lobbyists. (Rosenberger was not charged in the investigation.)

A spokesman for the OCLA denied any connection with the ads at the time. On Thursday, he said the payment was a decision by the company’s former lobbyist, Neil Clark, who was charged alongside then House Speaker Larry Householder with racketeering to pass a bailout of nuclear plants in Ohio.

The payday lending legislation passed with all Democrats and most Republicans supporting it. CheckSmart’s PAC then wrote checks worth between $1,000 and $2,000 to the Republican lawmakers who voted no, plus a $5,000 check to Yost for his attorney general campaign.

Alongside the CheckSmart contribution, Yost has received about $38,000 from Lee Schear and his wife. Lee Schear is president and CEO of NCPFinance, a payday lender based out of Dayton.

Yost came to office with backing from the Republican Attorneys General Association. Saunders gave $12,700 to RAGA in May 2018. Populus Financial Group, another payday lender, gave RAGA $250,000 in 2020. Yost’s spokesman said the political contributions have no effect on the office’s work.

Patrick Crowley, a spokesman for Community Choice Financial, said CheckSmart has no affiliation with Green Bear and doesn’t receive any funds from Green Bear. He said CheckSmart makes its money from other financial services like check cashing.

He acknowledged, however, that the first CheckSmart locations were founded by James Frauenberg. Both Frauenberg and his son (who shares his father’s name) left CheckSmart in 2008. The younger Frauenberg started Green Bear Ohio, which lists his Park City, Utah residence as its operating address in state filings.

Crowley declined to comment on the complaints into Green Bear, and said the company responded in a timely matter to its own complaints. He said Green Bear stopped originating new loans in Ohio on June 27, 2020.

Of the judicial ruling calling Green Bear’s loans a legal fiction, he said the decision has no precedential weight and only applies to the one narrow case.

“Other than this one, isolated decision there has been nothing that even remotely suggested that Green Bear’s credit lines were anything other than fully compliant with its license as issued by the Ohio Department of Commerce, Division of Financial Institutions,” he said.

Green Bear could not be reached for comment. No store locations could be identified in Ohio. It has no apparent website of its own, although one listed on the complaints against the company links to a Californians-only lender.