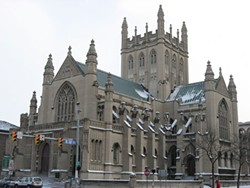 Wikipedia
The Cleveland Institute of Music’s annual CIM Orchestra Community Concert on Wednesday, March 23 at 8:00 pm in Severance Hall will feature guest conductor Jahja Ling, the Cleveland School of the Arts Chorus and Instrumentalists, and the Singers’ Club of Cleveland. The choruses will combine to sing Johannes Brahms’s dramatic Schicksalslied (Song of Destiny, text by Johann Wolfgang von Goethe), and the orchestra will play Brahms’s Academic Festival Overture (Brahms’s response to an honorary degree from the University of Breslau) and Gustav Mahler’s Symphony No. 1 in D. Mahler’s symphonies can include nearly everything, and this one incorporates tunes from his Songs of a Wayfarer and a bizarre little funeral march based on a minor-key version of Frere Jacques. That and a lot of thrilling brass climaxes. The concert is free, but you’ll need to reserve tickets through the Severance Hall box office.

Cellist Steuart Pincombe joined the early music scene in the Netherlands after graduating from Oberlin, but he’s back in the U.S. for an extensive, year-long tour called “Music in Familiar Spaces.” Traveling from place to place in a remodeled 1959 camper, Pincombe is performing a variety of programs in cafés, breweries, churches, and homes. He’ll bring his “The Art of the Fugue” program with Netherlands-based pianist Shuann Chai to Nighttown on Thursday, March 14 at 7:00 pm. They’ll be performing cello sonatas by Brahms (No. 1 in e) and Beethoven (No. 5 in D), interspersed with excerpts from Bach’s Art of Fugue. Reservations can be phoned in to 216.795.0550, but you can name your own ticket price at the door. (Drinks and food are available, but price tags are non-negotiable.)

Just back from their recent residency in Miami, where they celebrated the tenth anniversary of their partnership with the Arscht Center, The Cleveland Orchestra will play two concerts in Severance Hall this weekend featuring Norwegian cellist Truls Mørk in Robert Schumann’s concerto. Music director Franz Welser-Möst will open the program with Hungarian composer György Kurtág’s Petite musique solennelle. The performance is a tribute to the late Pierre Boulez, who had a long relationship with the Orchestra. (Kurtág’s piece was a 90th birthday present to Boulez.)

Rounding out the evening, Welser-Möst will turn to the sixth symphony by his 19th-century Austrian compatriot, Anton Bruckner. For those who believe the old quip that Bruckner composed the same symphony nine times (he actually wrote eleven, btw), No. 6 proves otherwise. Bruckner himself noted that “Die Sechste ist die keckste” (“The sixth is the boldest”). Hear that for yourself on Thursday, March 24 at 7:30 or Saturday, March 26 at 8:00 pm. Tickets can be ordered online.

For one of the few local musical events marking Holy Week and Easter, Trinity Cathedral will continue a decades-old tradition of a free Good Friday concert on March 25 at 7:30 pm. Todd Wilson will lead the Trinity Cathedral Choir, Trinity Chamber Singers, and Trinity Chamber Orchestra in a program of French music including Gabriel Fauré’s celebrated Requiem and Cantique de Jean Racine, along with Francis Poulenc’s Four Motets for a Penitential Season. The performance takes place in the Gothic nave of the cathedral at E. 22nd & Euclid in downtown Cleveland. A freewill offering will be received.