Ohio voted against slot machines, but we got them anyway. 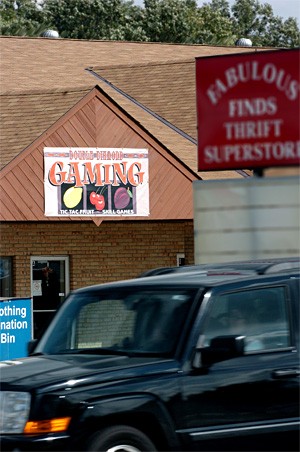 Walter Novak
The Wild Cherry in Streetsboro serves hot coffee and the promise of a big jackpot.

The casino in Streetsboro isn't decorated in flashing lights or fountains and brass. There's but a small neon sign that reads "Open," and it's quite necessary. Otherwise you might mistake the storefront in this decrepit strip mall as just another business that packed up and left. In fact, Wild Cherry Gaming is the one place in town where the money keeps rolling in.

Inside the dark cinder-block casino, you won't find a crab-claw buffet, but rather a hot pot of coffee and Styrofoam cups. Glued to video screens are men and women still in their work clothes and old folks punching away their Social Security checks.

If you were one of the many Ohioans to vote against legalizing slot machines back in 2003, you might be surprised to walk into one of these parlors, which have sprouted all over Ohio. They house machines that look like slots, play like slots, and pay like slots.

But then comes the punch line: They're actually "games of skill," which are perfectly legal.

"You have to find where your best move is," explains a sweaty-palmed kid, standing in front of a Tic-Tac-Fruit machine in a Lakewood bar. Twenty-five-year-old John Lazuka has been sent here by his dad, the owner of Automated Music, a Concord company that operates the machines, to explain them to a reporter. Tic-Tac-Fruit, for example, is much like tic-tac-toe, only with fruit. "You can't sit up here with a blindfold," says Lazuka. "That's the element of skill."

Yet earlier on the phone, Lazuka admitted to another element at work: bullshit. "It's basically a loophole in the law," he said. A loophole that many lawmakers are now wishing they'd never opened.

Automated Music got into the gambling business back in 2003. At the time, bar owners were hosting cash golf tournaments for the arcade game Golden Tee. To eliminate any legal confusion about the contests, Ohio lawmakers tucked a provision into a budget bill, legalizing cash-paying games based "predominantly" on skill.

A boutique industry was born overnight. Game manufacturers elsewhere began producing "skill games" solely for Ohio consumers, designed specifically to fit into that gray area of the law. Soon they were as common in bars as dartboards.

But with the law so ambiguous, how to regulate them was anybody's guess. In some towns, cops looked the other way. In others, they raided bars and seized the machines. In a handful of places, like Eastlake, officials even licensed the games and started demanding a cut.

But don't call off your trip to Argosy or Niagara Falls just yet. While these may play like slots, they don't exactly pay like them. Conventional slots are required to pay out a certain percentage – usually no less than 75 percent of the total bet. No such laws govern skill games. Riedthaler says he's seen Ohio games that were tweaked to pay out as low as 55 percent.

Some are just downright scams, like Queen Bee and Monkey Land, where players try to "stop" the whirring reels on winning combinations. Not only is it impossible for players to move fast enough, says Bob Sertell, a New Jersey gaming expert; even if a player is quicker than the machine, the computer will often cheat, quickly morphing one object into another to break the winning sequence and avoid a payout. Think of them as carnival games where the rings aren't big enough to fit around the milk bottles.

"It's pure horse-pucky," he says. "Every one of these machines cheats every player every play."

In any other state but Ohio, lawmakers wouldn't need four years to remedy the swindle. But politicians have been getting plenty of money to remain inactive. Attorney General Marc Dann, who campaigned by hammering the state's infamous coin investment and Columbus' tradition of pay-to-play, took tens of thousands of dollars from the skill-game industry. He even attended a fund-raiser at the office of a lawyer hired to represent a gaming company on a case Dann's office was handling.

That company, Castle King of South Carolina, had won a case against the state liquor commission, which sought to ban its popular game Match 'Um Up. After the fund-raiser, Dann dropped his challenge to the lower court's decision.

Dann later backed out of the settlement after Castle King asked that a lab analysis of the game be kept from public view. But when Governor Ted Strickland declared an emergency ban on the games last month, Dann suddenly began filing complaints against gaming parlors.

Spokesman Leo Jennings says Dann wasn't bought: "If somebody thought that they were buying themselves an attorney general or a public official who was going to take a soft stand on this issue, they'd want their money back."

Yet Dann is finding that the genie's not so easy to put back in the bottle. A Franklin County judge blocked him last month from enforcing the ban until an appeal can be heard. Last week the Ohio House passed a bill to ban the games, but until the bill winds its way through the statehouse, it's open season. Racetracks in Columbus and Cincinnati now have gaming parlors as well.

"What you presently have," says Bob Sertell, "is a mess."