After Zumba proved too strenuous, Cleveland Heights photographer Jane Critchlow looked around for another place to dance her way to fitness. She found her way to a line dance class at Bedford Recreation Center. When she showed up she immediately realized she was out of step, but it wasn't because she was a novice and didn't know the routines.

Critchlow is white. Most of the dancers were black.

"People didn't want me there. I understood," she tells Scene.

Her friend and fellow dancer Nishell Preston interrupts before Critchlow can explain the looks and wariness.

"It was a definite change in the air," Preston says.

The frostiness Critchlow encountered had surprised her. She wasn't the first white woman to attend the class, nor the first to join the group. Preston, a black woman, encouraged her: "I said, 'We're not all like that. Come dance with me.'"

Critchlow says it took six months to be included in a conversation, much less become part of the larger group. Then and now, she wanted to know what was going on. How did a slight, grey woman with a page-boy hairstyle become an interloper? What did black women actually see when they looked at her?

“White women are simple,”Angela writes. And Lorna asserts,“Black women own their feelings.”

Four years later, some of her questions have been answered with Critchlow and Preston's newly released book, Black Women White Women. It's a self-published effort that gives 40 white and black women of various backgrounds a simple assignment. White women had to complete the sentence "Black women are ... ." Black women were asked to finish the sentence "White women are ... ." Each woman is identified only by her first name. Each entry includes a portrait taken by Critchlow, who teaches photography at Oberlin.

The entries are as varied and complicated as race itself. Some are a single sentence.

And Lorna asserts, "Black women own their feelings."

Some begin their offering tentatively, acknowledging wrong words can lead to hashtags and social media blowback. Bre's entry begins with this admission: "I am very fearful someone will be offended by my opinion on this topic, but I believe everyone should be considered equal, although no two people are the same ... I recognize race, but I truly struggle to categorize individuals by physical attributes, especially skin color ... .

"We are individuals ... and that is why I struggle to give a clear cut answer on my opinion of black women ... because no two black women are the same, just as no two people are the same."

Lillian, who is black, notes that intimacy only goes so far when it comes to bridging the racial divide. "Many of the white women I know have grown up very different, with different views on how life works," she writes, "and though we have the same values ... the steps to get there often look very different ... And this even includes the white women in my family."

Melissa mentions what she'd learned from black women: "Personally, they taught me that my pretty Big legs are really Pretty big legs."

With the line dance class as a personal foundation and an experience from which to draw, Critchlow originally planned to ask black women to talk about white women. She was nurturing a curiosity.

But Critchlow says the women she approached were "reluctant" to talk to her. She mentioned the project to Preston, who agreed to help — but only if white women were included.

The tables were turned in an earnest way, and the project quickly became more complicated than the pair expected.

"The people who did the book, [responded] because they knew us and we begged," Critchlow says. "Or they were strangers, but they knew somebody else." The project blossomed out of friendships, and the tone of the book reflects that.

That's why Johanne Farris agreed to participate. Preston is her niece, so Farris didn't hesitate to join the project. Her poem starts with these lines:

"White women and me now let me see.

She and me make We.

She sometimes is afraid of me, so across the street, She will flee.

Now me, sometimes I am afraid of she, I just walk pass I let her be..." 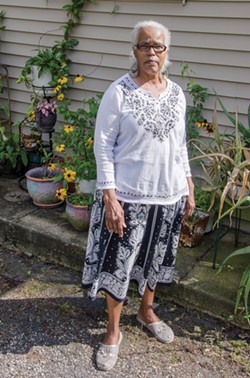 Farris says her observations come from a lifetime of experiences. "I have seen some whites literally cross the street rather to walk past me," she says. "And I don't really think I look dangerous, or anything scary. It must be just the color."

She's a Cleveland native who was one of the first blacks to attend East High. Her best friend was a white student named Frances. But the friendship never went farther than the schoolyard.

"She didn't come to my house, I didn't go to her house," Farris says. "But we were really good friends, as good as we could have been back then. That was in the '50s and the '60s."

Now Farris lives in Woodmere, a small village nestled against I-271. Her children and grandchildren grew up with white friends. But Farris says her views of white women haven't changed much over the years. She remains convinced that many whites are simply afraid of blacks.

"At one time, they thought we were monkeys and had tails," she says. "Sometimes I think they haven't really gotten past that."

Or, as she wrote for the book: "The longer I live this thing, I know ain't nothin changed, it just has a new cover."

But a lot has changed in Gina Ringgenberg's view of black women. The Medina native now lives in Washington, D.C., where she works for KeyBank. Her submission only took 10 minutes to write, she says. She reflected on a chance encounter she had with a trio of black women five years ago.

She ran into the women while browsing vintage family portraits at an antique shop. Their attire and surroundings made it clear the family had been well-to-do.

When one of the black women noted it was odd to be going through such precious mementos, Ringgenberg had an epiphany. 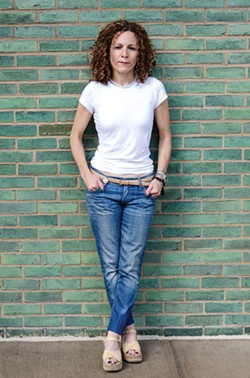 "This time did feel strange for me too," she writes. "But it wasn't pawing through someone else's family photographs that made it feel odd. It was standing there, looking through almost a hundred photographs and not a single one of them was of a black man or woman. ... At that moment, I realized that an entire race would almost never walk into antique shops and see photographs of their ancestors, dressed in their Sunday best seated in a fancy parlor."

Ringgenberg says she mostly interacted with whites until she went to college at John Carroll. There, her circle of friends widened and grew more diverse. Nevertheless, she was blind to the advantages her race gave her — until she stopped in the antique store.

"I would say it was gut-wrenching," she tells Scene. "The juxtaposition of [the black women's] perception of that situation and my perception was so different. ... There's certain things you don't think about, because I was born into a white family. In that very moment, the thing I could feel the most was, 'Wow, this feels like white privilege.'"

As they worked on the project, Preston and Critchlow learned about their racial group, as well as each other's. Both women wish they had been able to chip away at defenses and get more honesty.

"I had a woman who said, 'I'm afraid of black women. Those loud black women, they really scare me,'" Critchlow says. "White woman fear is one thing that's missing in the book."

Ultimately, the experience answered Critchlow's original question: How to "be" around black women.

"I learned, 'Be white,' she says. "I'm a white woman. I just don't try to be black. I see a lot of white people, when they get around black people, they try to be black. So as idiosyncratic as I am, in a white cultural way, it's like, just be that way."

Now that the book is published, the pair have been considering ways to promote it. They hope to offer Black Women White Women to book clubs and other organizations working on race relations. With impending rollbacks in civil rights protections, the pair believe all women have to find a way to come together.

"We're losing ground," Critchlow says. "Now more than ever, we have to figure out a way, at least, to be not so afraid."