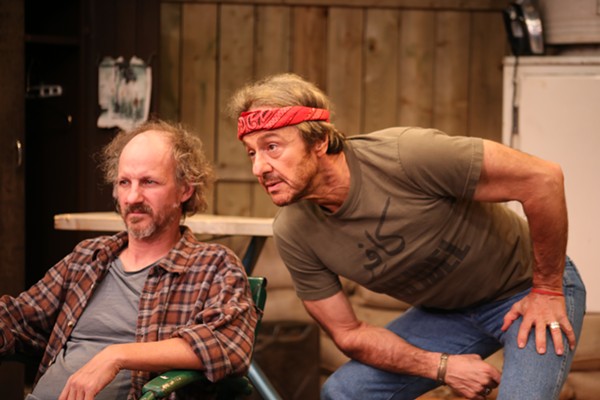 Brian Kenneth Armour
There’s a huge attraction to living in the past. That’s the place where you know what to expect, where all the events have been played out and you can visit at your leisure. Sure, there may be painful memories and even some ghosts wafting around, but at least it’s a fixed entity. That beats the hell out of the present, when you don’t know what new horror (insert Trump-cough here) is waiting around the corner.

In Last of the Boys by Steven Dietz, two older men have taken up virtually permanent residency in their past, back when they were grunt buddies in the Vietnam War. And once they are joined by Jeeter’s new girlfriend Sayler and her mother Lorraine, each of whom have their own profound problems, it’s clear the stage is set for some explosive confrontations and revelations.

Dietz is a talented playwright, and he knows how to coax chuckles from his audience. Plus, one could hardly ask for a more skillful cast than the one offered by director Sean Derry. However, the script gets a bit tangled up in its own premise, especially regarding a ghost who visits Ben repeatedly. The actors often rise above this flawed material, but even they at times seem detoured by a play that never allows them to find solid character footing.

Ben is the occupant of a mobile home set on a toxic Superfund site that is surrounded by piled sandbags, stacks of black barrels containing God knows what, and some rusted lawn furniture. He’s being visited by Jeeter, a pal from back in the day who follows the Stones on tour and often lapses into hippie-dippy riffs about spirit quests. Jeeter has just returned from the funeral for Ben’s father, which Ben did not attend, and Jeeter brought along the flag that was draped on the coffin of Ben's father, who was an aide to Defense Secretary Robert McNamara during 'Nam.

As they share bottles of beer from an outdoor fridge, Ben begins interacting with a soldier (Nate Homolka) in full combat uniform who helps Ben put on a suit and tie so he can channel the words of Ben’s idol, the generally (and justifiably) despised McNamara. Still, Ben sees the architect of the U.S. involvement in Vietnam, the former Ford executive, as the “man with a plan.” And as the play progresses, Ben’s interactions with the ghost get progressively weirder and even physical as their connection ends in a grotesque sort of baptism.

Meanwhile, Jeeter’s 35-year-old gal pal Salyer (an understandably detached Rachel Lee Kolis) always “wears a lot of clothes” to hide some of her own demons. Turns out, she has daddy issues of her own involving Vietnam. And her mother Lorraine, who has come to rescue her from the clutches of Jeeter, is supposedly a dead-end boozer.

Clearly, playwright Dietz has set himself a daunting task in weaving together these unusual characters and free-floating metaphors including a pervasive fog which is referenced but never seen, and the final result is only partially successful. What works well, at times, are the dialog scenes between Ben and Jeeter. Robert Branch is an actor with an admirably wide range, and he’s up to the task of portraying this cynical, world-weary man who is beset by phantoms of all kinds. And he is met, acting-wise, on equal footing by Paul Floriano, whose Jeeter gets the best lines and is often a bundle of nervous excitement. That is, when he hasn’t lapsed into a fugue state inspired by, you guessed it, some troubling memories.

Unfortunately, the script doesn’t provide enough backstory about Jeeter to allow the audience to fully understand who this guy is. As a result, the central relationship between Jeeter and Ben is a mystery papered over by their cryptic conversations which, when they don’t work, feel manufactured and not organic. This is particularly true at the start of the show, a situation that is not aided by the actors overlapping each other as they deliver their rapid-fire lines. This is a performance technique that must be carefully employed, otherwise it feels as if the characters aren’t listening and just talking. And in this play, listening is key for both the characters and the audience.

Also, the subplot involving Lorraine and her daughter never comes to fruition, since it is woefully underwritten. As Lorraine, Anne McEvoy displays her precise comic timing throughout (an example: When Jeeter tells her “I know what you’re thinking.” Lorraine responds with “So why are you still here?”). Trouble is, it’s hard to buy the elegant and self-possessed McEvoy as a hard-drinking woman who will guzzle whiskey at a moment’s notice.

For those of us who lived through the Vietnam War as adults, there are ghosts aplenty. And as the current documentary series on PBS shows, the interest in that doomed and lethal excursion never seems to wane. The feelings of loss and guilt, along with the excesses of governmental hubris, are real. This play touches some of those points, but undercuts its theme with too many conflicting elements.