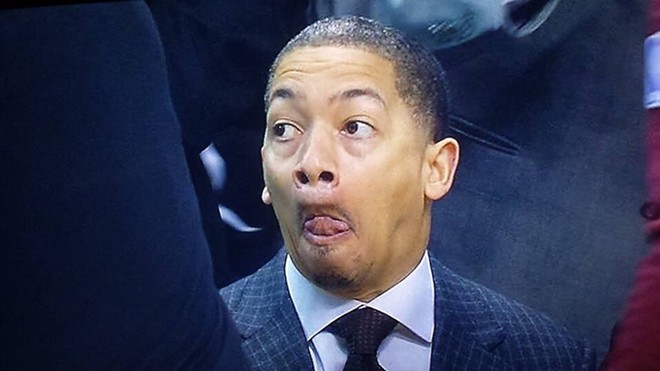 Reddit.com / @Warriorsin4
Cavs head coach Tyronn Lue was fired Saturday morning after a butt-ugly 0-6 start to the season. General Manager Koby Altman said at a press conference earlier today — betwixt the firing of Browns head coach Hue Jackson and offensive coordinator Todd Haley — that the Cavs organization and fans owed Lue an enormous debt of gratitude for his two-and-a-half years of service with the team, which included the 2016 Championship run.

Lue wasn't the right fit for the current roster, though, Altman said, which he hastened to meaninglessly characterize as a "mix of veterans and young guys." Assistant Coach Larry Drew will now take the reigns in an interim role, though he has resisted the term "interim coach." At today's press conference, he was calling himself the "current voice" of the team, and is reportedly reluctant to agree to full interim coaching duties without a long-term contract. When Lue took a leave of absence late last season to deal with some personal medical issues, Drew coached the Cavs to an 8-1 record.

What Altman didn't say, but might have, is that Lue has looked totally disengaged. The emotional battering and mental anguish of dealing with both Dan Gilbert and LeBron James over the past several years may have exacted too high a price. While Lue was clearly a breath of fresh air for the 2016 Cavs in the wake of a miscast David Blatt, it turns out Lue may not be a very good head coach.

Despite the 0-6 start, Lue still owns an impressive overall coaching record, having tallied a total of 128 wins and 83 losses since he took over at the halfway mark of the 2015-2016 campaign. His total .607 winning percentage is good for third-best among active head coaches in the league, trailing only the Warriors' Steve Kerr (a preposterous .809) and the Spurs' Gregg Popovich (.688). He has been very successful on paper.

But that success has been thanks, pretty much exclusively, to LeBron. Without him, Ty Lue has floundered. Among the more startling statistical revelations apparent after a review of Lue's tenure is that he only ever coached the Cavs to one victory when LeBron was not in the line-up. His total record without LeBron has been a ghastly 1-18.

The lone victory arrived on March 16, 2016. It was a 99-98 squeaker over the visiting Dallas Mavericks. It should've been a four-point win, for the record, but the Mavs' Deron Williams hit a three-pointer as time expired.  Kyrie Irving scored 33 and Kevin Love scored 23 and collected 18 rebounds in the effort.

LeBron sat our four additional games down the stretch, resting in preparation for a playoff run. The Cavs lost all of them.

Games during the 2016-2017 season without LeBron were considerably uglier. LeBron missed eight games throughout the season and the Cavs were defeated every time, often by significant margins, as in the 16-point smackdown at the hands of the Detroit Pistons on Dec. 26; the 18-point threshing by the Chicago Bulls on Feb. 25; the fart-fest against the Miami Heat on Mar. 5, which the Cavs lost by 28; and then of course the total disembowelment by the Los Angeles Clippers on Mar. 18, which the Cavs lost by 30. Yikes!

Some will recall that the Cavs limped into the playoffs that year, losing seven of their final 11 games, including a four-game losing streak to close out the season. LeBron did not play in the final two.

In 2018-2019, however, LeBron is no longer with the team, (obviously). In his absence, Ty Lue has lost the ability to manufacture wins. Or perhaps he never had that ability? Perhaps only now, the limits of his influence, the weaknesses of his actual coaching, are being exposed. The current losses are different from Ty Lue's previous losses without LeBron only in the respect that they are happening sequentially.

LeBron's ragtag former supporting cast, plus Collin Sexton, doesn't inspire a great deal of confidence. But they showed flashes of exciting play in the preseason, and they should be able to compete in the east. Their frequent lapses in energy and focus, their horrendous defense, and their clockwork disintegration every third quarter must be blamed, in no small part, on Lue.