A Word from Don Jones, the Guy Trying to Ban Critical Race Theory in Ohio 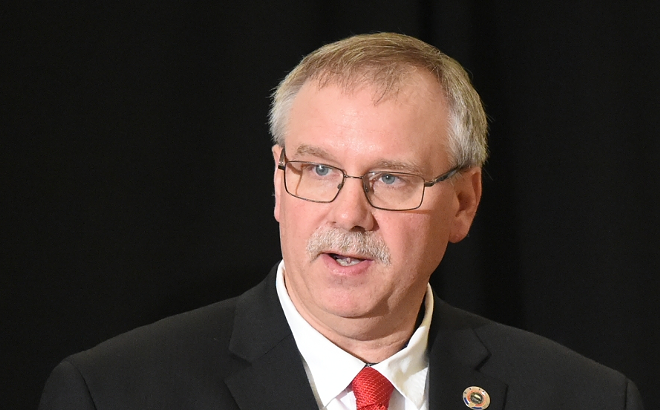 I’ll wait for the applause to subside.

For 23 years I taught ag education at Harrison Central High. (Go Huskies!) I also work at my family’s farm implement dealership. (Go D&J Sales & Service!) If there’s anyone who knows more about history and race, I don’t know who it could be.

“What is Critical Race Theory?” you ask. No one knows for sure. Or if it’s even taught in Ohio. All we can do is wildly speculate. What we do know is that it’s supposed to make White people feel guilty for making America awesome. As if.
When I was young, we were taught that our nation was built through hard work. Plus the hard work of kidnapped people who had to work for free. We already thanked them for their service. What more do they want?

Now Antifa has infiltrated our schools. They want to change our history by including the bad parts. Just because White men have all the money and jobs and power doesn’t mean America’s racist. It just turned out that way. Ronald Reagan, our second-greatest president (after Trump, obviously, but way ahead of Lincoln) once called our nation a “shining city on a hill.” That’s because we only talked about race among close friends, out of the earshot of anyone who might be listening.

Wake up, sheeple! Lincoln signed the Emancipation Proclamation in 1863. If you don’t count lynching, poll taxes, sharecropping, job discrimination, redlining, gerrymandering, back of the bus, the drinking fountain thing, police shootings, segregated schools, the Ku Klux Klan, etc., etc., Black people have had it easy since then. Too easy. That’s why my Republican colleagues enacted voter suppression. The game could use a higher level of difficulty. Just to keep it sporting.

When I talk to people at my rural farm implement store, they tell me they don’t see color. Except when one drives through town. Which is why they call the cops so someone can give them directions out of town. It’s called “being neighborly.” All this talk of race only divides us. And not in a good way, like we do it.

If anyone’s the victim here, it’s white men. Ever since America got “woke,” we’re getting “canceled” just for saying nice things about Hitler on Twitter. Transgenders are competing against our daughters in the shot-put. Woke corporations are giving one of our board seats to women and Mexicans. You won’t hear about this in the Lamestream Media.

My point is that we should only be teaching our children the facts. Like how John Wayne saved the Alamo. Or how the War of Northern Aggression was just a minor labor dispute. Or how George Washington didn’t have 123 slaves. He had 123 “valued team members.”

During my nine years as chairman of the Harrison Soil and Water Conservation District, I learned a lot about race. Way more than you. And I say it’s time to stop the blame game and look in the mirror. When I do, all I see is a true, blue patriot. What do you see, Karl Marx?