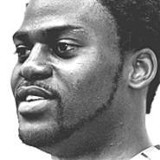 This story was originally published in Scene on 4/7/2004. Abram Elam is now the safety for the Browns. Back then, he was struggling to make a claim to meaningful playing time at Kent State after departing from South Bend for various reasons. From the shooting deaths of his siblings to his struggles on the field, it's well worth the read to find out just how Elam has gotten to where he is these days.

He was bound for football stardom until that night at Notre Dame. Now Abram Elam struggles for redemption at Kent.

More than anything else, Abram Elam misses the way his name sounded over the loudspeaker at Notre Dame football games. When he would run onto the field or make a tackle, the announcer, tucked high away in the press box, would bellow out A-bram E-lam like it was money, like it was really worth something. And for a few moments afterward, the echo of the boy's name would continue to rise above the stadium, like a flag slowly being hoisted toward the sky.

"You know," Abram says now, nestled safe inside his coach's office, "I could sit and listen to that sound all day and never get sick of it." The boy sighs, crosses one beefy arm over another, and settles back into his chair.

Two years ago, Abram Elam was a reserve safety on the Notre Dame football team. At six foot one and 210 pounds, he was an astonishing specimen, built with a body that needed to move. His torso looked as if it were carved by a sculptor's hand; his calves bulged so that when he walked, it seemed as if he was hauling a pair of overinflated balloons with him. He was a highly touted sophomore then, expected to do great things for the Irish.

But doom, like an anxious bride, was about to unveil itself.