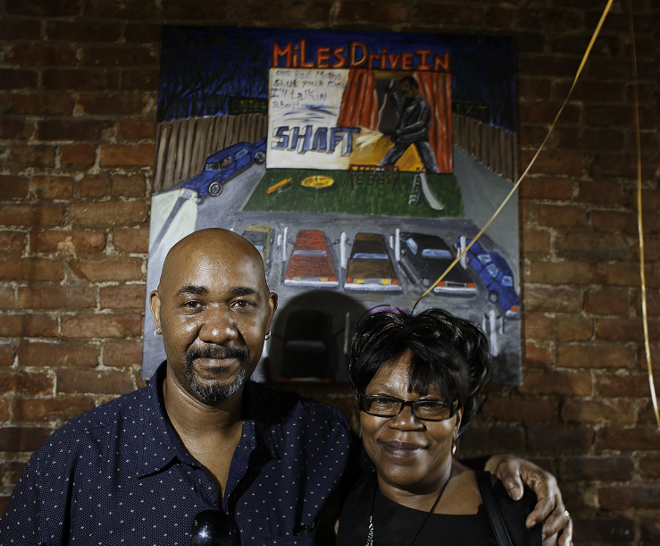 There is an outpouring of grief this week from a community who lost a friend, a neighbor, a family member and an inspiration.

Lifelong Cleveland resident and celebrated artist Michelangelo Lovelace Sr. passed away on Monday, April 26 after a long fight with pancreatic cancer. He was 60 years old.

Early in his life, Lovelace got into some legal trouble and sat before a judge who asked him, “What can you do?” Lovelace responded, “I can draw, I can do art...” The judge said, “Well you better do that or the next time you’re in front of me, you’re going to prison.”

Lovelace took the judge’s direction to heart and set off on a life-long successful career as an acclaimed artist.

His work was an optic diary of how he experienced Cleveland and the world around him on a daily basis. His lively animations of people and cityscapes blister with color and exhibit and unfettered wonderment. He took content which might seem downtrodden and injected it with hope and vigor, portraying possibility and promise. His pieces were a societal commentary with socio-political leanings at times, but never pompous and always honest.

"My paintings depict what it is like living in a community where anything can happen at any time, and where life can often be fast, poor, and short," he said. "My paintings deal with many of the issues that affect poor inner-city communities in the United States: issues like poverty, crime, drugs, education, police brutality, health care, and other day-to-day happenings."

Courtesy of Fort Gansevoort and the Artist

Growing up in many different areas of Cleveland, bricks were a common visual element of his surroundings and brick structures can be seen in many of his works, along with storefronts representing city neighborhoods and urban panoramas.

Lovelace attended the Cleveland Institute of Art and spent 30 years working as a nurse’s aide at a senior care facility in Cleveland, Ohio outside of his career in art.

His impressive accolades are extensive and might be jaw dropping to his childhood friends who teased him about being an artist, throwing around the nickname “Michelangelo” until eventually it stuck.

Maria Neil Gallery in The Waterloo Arts district represented Lovelace for a short period beginning with an exhibition in 2013.

"Lovelace was always a believer in humanity, himself, and God,” said Adam Tully, co-owner of Maria Neil. “He believed that there would be an opportunity for all of us to see the good in one another. There is no one else we know of that can maneuver that razor-thin line of (dark) humor and harsh reality and communicate so effectively about the city’s problems. He learned about that kind of communicating from his mentor, Reverend Albert Wagner. Michelangelo spoke highly and lovingly of him, and his influence was clearly felt in the works that were created.”

Tully and Maria Neil co-owner John Farina fostered Lovelace, promoted his work to collectors and institutions, helped him with marketing, and assisted him in networking and to get exhibitions outside of Cleveland. Later, he was represented  by Fort Gansevoort in New York.

“His work is a testament to the beauty of his community and the people he knew and loved," Gansevoort said. "It was a pleasure and an honor to work with Michelangelo and be a part of his journey. As you can see in his accomplishments, his art was seen and we will continue working for him.”

“Seeing Michelangelo succeed as he did with his works shown at Museum of Contemporary Art Cleveland moCa, acquired by The Cleveland Museum of Art, winning the Cleveland Arts Prize made me so happy,” said Farina. “Knowing that Adam and I played a part in that success is a source of pride and an honor I’ll always cherish. He was more than just an artist we worked with, he was a friend.”

Lovelace’s work will be presented in ‘Next To You,’ an upcoming group exhibition opening on May 28, 2021 at the McEvoy Foundation for the Arts in San Francisco, California.

“I’m one of those people who says, ‘Art saved my life,’ and it truly did,” Lovelace stated in an interview with MOCA Cleveland in 2015.

A memorial service will be held at Pernel Jones and Sons Funeral Home on Tuesday, May 4, from 3-7 p.m.