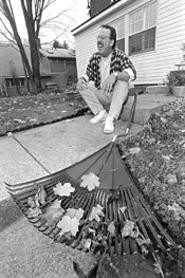 Walter Novak
Dancin' Danny, in between jobs.
Country music is all about broken promises and thwarted dreams. So is a career in commercial radio. No one knows this better than Cleveland DJ "Dancin'" Danny Wright. Just like the truck drivers and jilted prom queens of the songs he's spun, he's been jacked around and kicked to the curb with rhythmic regularity.

Three weeks ago, Wright was considered one of the best country DJs in the nation. Known for his silver tongue and playful sense of humor, he was recognized in 2000 as the Country Music Association's Radio Personality of the Year.

But now he's considered one of the best unemployed country DJs. When parent company Clear Channel slashed workers at WGAR-FM, he was among the casualties. He's being replaced by a voice-track recording done by a guy in Baltimore.

For such a personable guy, this seems like the ultimate in depersonalization. "Danny is one of the last real people on radio," says Nancy Alden, the longtime midday DJ on WDOK-FM, which is owned by Clear Channel competitor Infinity Broadcasting. "You feel like he's a friend of yours goofing around with you. That's what radio is losing now. Everything's become so scripted."

The pink slip didn't come as a surprise. "I'd been feeling the vibes for months," Wright says. In his 25 years in radio, Wright has become well acquainted with the ax. He's parted company with some of the best and worst in the business, from Pueblo, Colorado, to Washington, D.C. "I rarely have survived station changes," he says. Because the people hired for their style are usually the first to go, "I'm usually the first guy gone."

Raised in the strictly Led Zeppelin and AC/DC town of Kalamazoo, Michigan, Wright had a long career in rock and roll radio before he made the leap to country. A high school dropout, he signed up for broadcasting school in his early 20s and found a gravel-voiced role model in Wolfman Jack.

"I loved the old Wolfman," Wright says. "Because he'd turn on the mic, and you'd never know what was gonna happen. You never knew what you were gonna hear. Or who was gonna be with him or what he was gonna talk about. It was this goofy, make-believe world, and no one really knew who the real Wolfman was."

The Wolfman's beatnik voodoo riffs helped shape Wright's own freewheeling style. At KGR in Seattle, Wright would yak on the air with the janitor, whom he'd nicknamed Duane Gomez, and intersperse calls from lonely hearts with the jungle cries of a listener dubbed "Monkeyman." At Cleveland's old G98, he'd make up crazy poems and kid around with Al Roker, the station weatherman at the time, for stretches that lasted as long as the pair felt like talking.

"People loved it," he recalls. "That I could see. My ratings were through the roof."

But the station changed hands, and it was back to Top 40 snoozin' with Casey Kasem. "All my life I've been told, 'Shut up and play the hits. Nobody wants to hear what you have to say. It's just DJ blather.'

"Why can't [program directors] just accept the fact that there are some people in radio that are kind of entertaining? In radio, all you need is 10 percent of the people to listen to you, and you're a hit."

When he joined WGAR in 1994, Wright thought he might have trouble adapting to the country format. But after years of being stuck backstage with the hair band of the month, a little down-home goodness turned out to be a welcome change.

"Country music is all about buddies, food, chasin' women, and cold beer," he says. "Broken hearts, findin' love. That ain't bad. And deep down, the artists know what it's like to earn a buck. Rock guys seem to forget that immediately."

Nationwide Broadcasting, WGAR's owner at the time, prided itself on treating its workers like family. "The very first words when I walked in were 'Hi,' followed by 'Welcome to your last station,'" says Wright, a baseball-cap-and-sweatshirt kind of guy who talks twice as fast as the average human. "'We just don't fire people. If they're good folks, we just keep 'em forever.'

"I was going, 'Oh my God.' I was really thinking in the back of my head, I don't know, maybe I can work here 15 years and then retire."

But forever turned out to be only seven years -- Wright's longest tenure at a station. The firing shocked Denny Nugent, Wright's former boss at WGAR. Nugent left the station for a marketing job with the City Mission right after Clear Channel took over.

"Despite all that's going on in the radio business, I thought, boy, they'd be nuts to get rid of Danny," he says. "He got that award last year. He was such an asset to the station. And he certainly wasn't the highest-paid guy on the market."

Wright's not so wide-eyed. "The whole thing that drives Clear Channel is to see how few people they can run how many stations with," he says darkly. "It's a real zeal they have." A publicly traded company, Clear Channel owns 1,170 stations -- a far cry from the 7 owned by Nationwide in the early 1990s, which was considered a lot back then. But Wright doesn't exactly yearn for the old days.

"In the mom-and-pop eras, when it was all live and done locally, I worked for a lotta jerks who would fire you just for blinking your eyes wrong," he says. "When I was in Everett, Washington, there was a station owner who was a very short, severe little woman who smoked cigars. She'd sit in the back of the station, looking out over us, and if she saw something she didn't like or you were talking too much, she'd yell out the door: 'Get to work!' Even Clear Channel wasn't that bad."

It'll be a slow death, but he predicts the big chains will eventually bust up, and radio will get its magic back. "You can't serve up the same product in every city the same way," he says. "You're dealing with talent, ego, and music," which are more subjective than a mega-company's bottom line. "It's not selling socks at Wal-Mart."

Maybe if everybody channels their beatnik voodoo power, it'll happen.