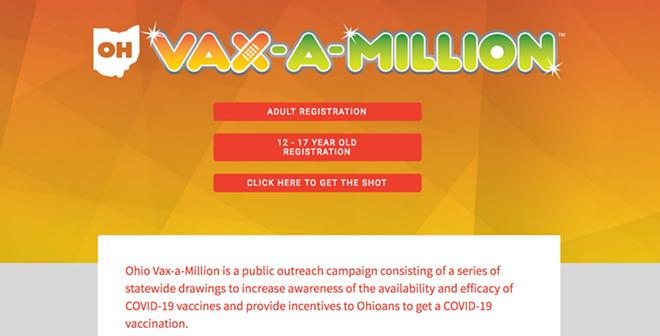 State of Ohio
The vax-a-million sweepstakes is brilliant

Still, less than 40 percent of the population was fully vaccinated. Now came the hard part. If we were to ever reopen schools and stores, put people back to work and resume our former lives, he would have to convince the recalcitrant to get their shots.

Every state was facing the same predicament, though it was especially acute in conservative lands. Those who understood the value of medicine charged the gates when the first doses appeared. Yet now he had to cultivate those on the sidelines of civic life: People too busy with jobs and kids to take the time. Non-English speakers struggling under all the noise. The young who’d been impervious to health concerns since time immemorial. The poor who assume that healthcare is a luxury. (The shot is free.)

Then came the defiantly ignorant. Or more accurately, DeWine’s own party. They’d fought him every step of the way, from protesting outside his health director’s home to denouncing the slightest safety precautions. The result was the strangest resistance movement in U.S. history: Masses dead-set on harming themselves and those around them, if only to own the libs.

Their fearmongering would make the Chinese secret service proud: The vaccine caused sterility and miscarriages. It contained microchips and “nanotransducers.” More people died from the vaccine than Covid itself.

If you were a low-information citizen, the kind who clung to the first thing that crossed your Facebook feed, you believed. Doctors were out the get you.

But while they might call themselves “patriots,” this was more fashion statement than committed philosophy. The good of the country was nowhere to be found in their semi-articulate rage. It was all about “rights,” “liberty,” Me. Beneath all the bluster, they were little more than garden-variety narcissists.

As anti-vax Dr. Elizabeth Laffay recently put it in testimony before the Ohio Legislature: It was not her “responsibility to put the health of the greater good before the health of myself as an individual.”

The rest of us assumed that reason, science, and study would eventually carry the day. We were morons. DeWine held a keener grasp of human nature. He would bribe them.

The governor announced a lottery for the newly vaccinated, with $1 million winners and college scholarships for the young. Vaccinations surged. So did the harrumphing.

“Using taxpayer dollars to incentivize something of this nature is an abuse of public resources,” added Rep. Jean Schmidt (R-Loveland).

House Minority Leader Emilia Sykes (D-Akron) called it a "a grave misuse of money that could be going to respond to this ongoing crisis."

Yet DeWine was responding to the crisis – with artful prudence. Amid Ohio’s $69 billion biennial budget, a few million was couch cushion change. Especially compared to the cost of hospitalizing all those who would otherwise be sick or dead.

More to the point: It worked. Ohio’s vaccination rate rose 28 percent. He was literally saving lives. Countrywide, the infection rate is now on a five-week decline. But when you remove the vaccinated from the stats, the death and affliction rates are the same as they ever were.

If you’re a true patriot — rather than the fashionista variety — you know “we all do better when we all do better,” as the late Sen. Paul Wellstone liked to say. By appealing to pure self-interest, DeWine showed us a faster way of getting there.