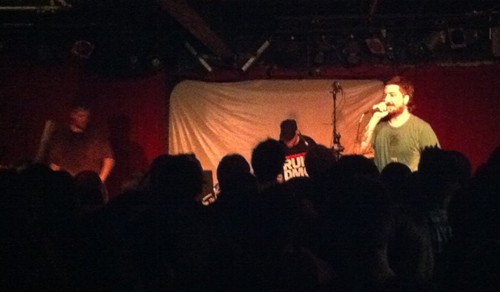 There's something really great about underground hip-hop shows. Whether it's the sense of community in the room or the danceable beats, the whole affair is kinda like shooting sugarcane right into your sweet tooth.

The Grog Shop was packed for last night's sold-out Aesop Rock show. There's an inherent kindness about the cult-like followings that back particular artists. Aesop Rock isn't the most well known name in rap (though he's not unknown by any means), but the fanbase he's garnered over the past 15 to 20 years is rabid beyond belief. And last night, the crowd was loud, intense and overjoyed to be catching Aesop's relentless set.

Flanked by fellow MC Rob Sonic and DJ Big Wiz, Aesop Rock took the room on a tour of his discography, landing on some old tracks while mixing in tunes from 2012's Skelethon. Hit biggest "hit" of sorts, "None Shall Pass," had the entire venue jumping up and down.

An interesting sort of aside cropped up when the show halted for a minute as Busdriver showed up on stage to give a lucky audience member a haircut. "Noah Justice?" Aesop called off from the sign-up sheet. Two apparent Noah Justices appeared on stage and, for a moment, went back and forth as to who really deserved the shave. ...Anyway, the buzz job Busdriver threw down was fairly comical and mostly just a wreck. Noah Justice surely went home and just shaved his head.

But all that was just another notch in the carnival-like musical atmosphere that the rappers onstage were creating.

Busdriver, who opened the evening's festivities, has some of the sickest flow in the business. It's a simple matter of fact. His well oiled lightning lyrical wonderment was on full display, particularly when he detoured into freestyle territory. A truly blissful moment came when the opening melody to "Unemployed Black Astronaut" began filtering through the speakers (audio embed below). He dropped the final verse in favor of some more free-form spitting and the crowd ate it up.

He's a prolific MC in the west coast underground scene and he's remained a sort of left-of-center, under-the-radar phenom for his entire career. Nonetheless, via his dadaist imagery and mind-bending cartoonish attitude, Busdriver's managed to kick out exploratory albums more often than his mainstream contemporaries.