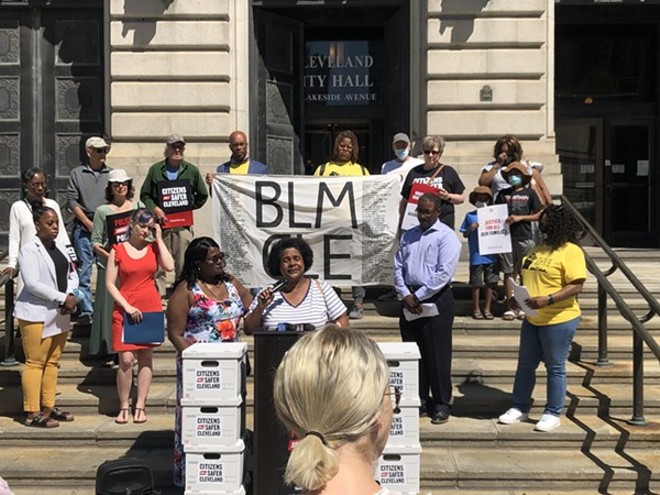 Courtesy Citizens for a Safer Cleveland
Brenda Bickerstaff speaks on the steps of Cleveland City Hall.

Citizens for a Safer Cleveland today announced it has collected an additional 3,208 signatures to place a ballot initiative for increased civilian oversight of the police before voters this fall.

The grassroots coalition had fallen 384 valid signatures short of the 6,270 required in its initial run, the Cuyahoga County Board of Elections announced in late June, but was given 15 days to collect and submit the remainder.

More than half of the initial 13,000 signatures submitted were deemed invalid, but Citizens for a Safer Cleveland are confident the latest batch of 3,208 contains more than enough valid signatures to make up the 384 deficit.

“We’re confident we’ve collected enough signatures to qualify, and we can’t wait to start campaigning in every corner of the city to get out the vote for this commonsense policy to make Cleveland safer for everyone. The recent ousting of Ayesha Bell Hardaway from the current monitoring team that oversees implementation of the consent decree further proves that the police can’t police themselves,” said LaTonya Goldsby, President of Black Lives Matter Cleveland in a press release. “Our initiative ensures independent investigations of police misconduct, while providing for more community involvement in decisions regarding police discipline.”

The Board of Elections will review the signatures for certification and make an official announcement.

From our earlier coverage:

The proposed ballot initiative would amend the city of Cleveland's charter to create stronger civilian oversight of the division of police. It includes strengthening the powers and resources of the civilian review board and eliminating the situation where the chief of police or public safety director can disregard that body's disciplinary recommendations. It would also automatically make termination the presumed disciplinary response for racist, sexist or other bigoted conduct or language by officers on the job.

Mayoral candidate Dennis Kucinich has come out in strong opposition to the measure, arguing that it would give an unelected commission "vast, unprecedented power that, in some instances, would constitute legal supremacy over the Mayor, the entire Executive Branch, and even the City Council." It is the job of the mayor and city council to develop and implement police reforms, he argued. He said the fact that the mayor and city council members were elected made them more accountable to the people.

“This charter amendment strips elected officials of the powers, the responsibilities, and the accountability they should have to serve the people of this city,” Kucinich said. “I doubt very seriously if anyone in government or the media has thoroughly read and understands what this charter change would do to local government. It must be defeated and defeated by a wide margin. Then the community must come together to begin the serious work of fulfillment of the federal Consent Decree, the implementation of workable police oversight and the beginning of new crime-fighting strategies to make our city streets safe."

Candidate Justin Bibb has come out strongly in favor of the ballot initiative.

"The civilian oversight board could be a great first step," he said. "Cleveland really could be a national model for something positive in public safety. It's something our residents deserve."