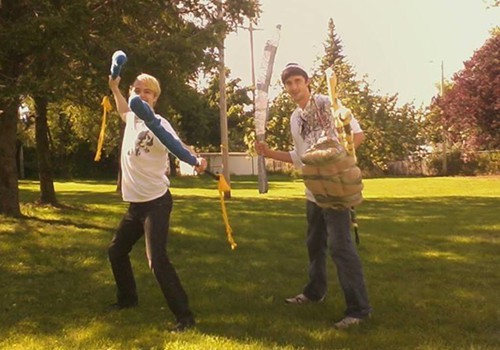 Two pals in the western suburbs learned a valuable lesson the hard way: if you report a robbery to the police, they're going to ask what was stolen.

This cleveland.com story has some details about the arrests of 20-year-old Bay Village resident Sebastian Wozniak and 22-year-old Avon Lake resident Anthony Klier. "Wozniak and Klier contacted police and said they had been robbed by a group of teenagers, but didn’t say what the teenagers had stolen," it says. Westlake police apparently then went through Wozniak's phone and determined the robbery was during a $80 weed deal.

According to police, Wozniak, 20, and Anthony Klier, 22, of Avon Lake, met a group of teenagers in the parking lot of a Westlake Taco Bell on Sept. 4 to practice medieval sword-fighting.

Yup, that's right, practicing "medieval sword fighting" (a.k.a. "larping") in the parking lot of a Westlake Taco Bell. Throw in getting your weed stolen by a group of teenagers and drug trafficking charges when you report it, and you've got yourself a sadness trifecta.

I found the photo of Wozniak and Klier for this story on facebook and was able to track down some security footage from that Westlake Taco Bell here: