Ahead of Ohio's May 9 Holocaust Commemoration, Survivor Talks About the Pain That Remains, 'Outrageous' Comparisons to Covid Vaccines 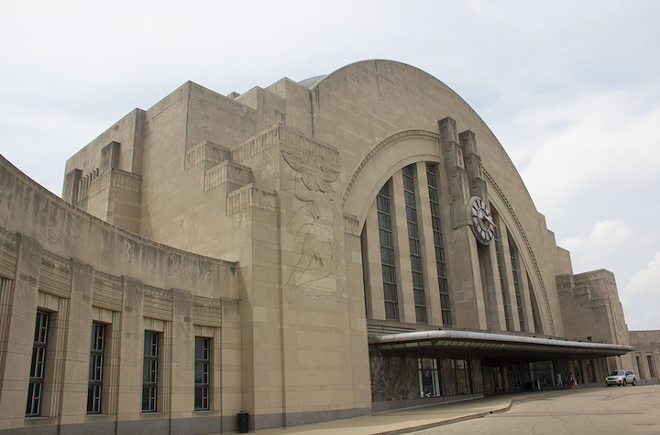 Photo by Nick Swartsell
This year's Holocaust commemoration will be held at Cincinnati’s Holocaust and Humanity Center in Union Terminal.

For the first time in 42 years, Ohio’s annual Governor’s Holocaust Commemoration will take place outside of the state’s capital. Instead, it will be held at Cincinnati’s Holocaust and Humanity Center in Union Terminal.

“Our location has such significance to the history itself, says​​ Sarah Weiss, CEO of the Holocaust and Humanity Center. “We are honored to host it.”

During the May 9 live-streamed event, Ohio Gov. Mike DeWine will host a discussion with author and historian Rebecca Erbelding about the United States' historic response to the Holocaust of the 1940s.

Erbelding, a curator for the United States Holocaust Memorial Museum, says she was asked to attend because her work on her recent book Rescue Board: The Untold Story of America’s Efforts to Save the Jews of Europe.

“We'll talk about why it took so long for the United States to respond to the genocide, what the country looked like in the 1930s as Nazi persecution grew in Germany, and how the United States didn't make the immigration process any easier for Jews trying to flee Europe,” Erbelding says.

Other guests will include Holocaust survivor Conrad Wiener, who lives in Cincinnati, and WWII veteran and liberator Henry Armstrong. Armstrong, who served in the liberation of Gunskirchen and lives in Cheviot.

Erbelding’s book centers on the creation of the War Refugee Board, which she says was created when Franklin D. Roosevelt's administration received pressure to rescue or provide relief for Jews.

“The Board's staff streamlined humanitarian aid, used diplomatic pressure, tried to evacuate Jews to safety, opened a refugee camp in upstate New York, and likely saved tens of thousands of lives in the final year of the war,” Erbelding says.

The May 9 commemoration will be steeped in history, and the discussion comes three weeks after DeWine signed an executive order defining antisemitism for state agencies. The definition is based on the language set by the International Holocaust Remembrance Alliance:

“Antisemitism is a certain perception of Jews, which may be expressed as hatred toward Jews. Rhetorical and physical manifestations of antisemitism are directed toward Jewish or nonJewish individuals and/or their property, toward Jewish community institutions and religious facilities.”


Erbelding says establishing a definition for antisemitism is a starting point.

According to recently published data by the Anti-Defamation League, there has been a 92% increase in antisemitic incidents in Ohio, with 43 occurring in 2020. Incidents include criminal and non-criminal complaints of harassment, vandalism and assault.

Wiess says the definition of antisemitism is important because it includes not only acts of violence, but also the rhetorical abuse often found in modern day politics and culture.

“We see the manifestation across political ideologies, across the spectrum, and it needs defined because it shows up in various ways,” Wiess says. “Sometimes it shows up in forms of historic religious antisemitism in tropes and stereotypes. Sometimes it shows up in the form of a conspiracy theory. That Jews are behind the scenes pulling the triggers and puppeteers. We’re seeing a lot of that today.”

The COVID-19 pandemic spurred conservative politicians to criticize mask mandates, vaccinations and other public-health protocols, comparing them to Nazi behavior.

In a reply to Washington, D.C. Mayor Muriel Bowser's tweet earlier this year about the city’s vaccination proof and mask requirements, Ohio Rep. Warren Davidson tweeted a photo of what appeared to be a Nazi-era health pass.

“This has been done before. #DoNotComply,” Warren wrote above the photo in a tweet.

After hundreds of users responded to Davidson and explained that this comparison was not only incorrect but also incredibly offensive, the congressman doubled down.

In 2021, former U.S. Senate candidate and and former state treasurer Josh Mandel — who is Jewish — criticized vaccine passports, saying, "We’ve seen this before… Nazi Germany also registered citizens. Our Liberty is under attack!"

Erbelding said the comparison is common, incorrect and offensive.

“No one should compare anything to the Holocaust lightly, and yet almost weekly I hear people evoking the Holocaust to serve a contemporary political argument,” Erbelding says. “There is simply no comparison between measures taken for the protection of an entire population and the Nazi efforts to murder European Jews. If someone wants to criticize protective measures and mandates, they are free to do so, but evoking the Holocaust to make that argument is offensive, inaccurate and morally wrong.”

Weiner, who was liberated from a labor camp in Ukraine at the age of 7, says most of his memory of the Holocaust stems from his mother and aunts recalling their stories and urging Weiner to never forget the horrors his family endured. He says any modern day comparison to the Holocaust is painful.

“I cringe every time I hear it,” Weiner says. “It really hurts, because that was the most oppression, the most horrible thing that could happen, that one person could do to another person. It’s not only because of the six million Jews; it’s the thousands of Catholics and priests and Jehovah’s Witnesses and gay people and handicapped people that perished. To compare that atrocity to having to get a vaccine is just outrageous.”

Comparisons like these and other common forms of antisemitism are what Weiss says people need to shut down in their own social and political circles.

The Governor’s Holocaust Commemoration will take place at 1:30 p.m. May 9. Guests are invited to attend virtually.