Airbnb Will Ban Clevelanders Who Throw Parties That Violate State Orders, Get the Cops On Your Ass 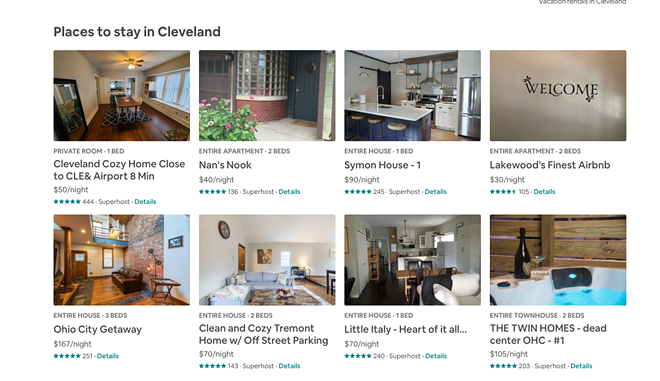 An Ohio City party at an Airbnb property that drew 100 people in late April also drew the Cleveland police and a second-degree misdemeanor charge for the host. A Willoughby bash in late March got busted after reports of shots fired drew cops to the rental property.

While those might be the only two local Airbnb parties to make headlines for violating Ohio's order limiting mass gatherings, there are undoubtedly — judging by tipsters in Scene's DMs — dozens more that haven't made news simply because there was no police response.

The company would like to let you know that should you use its service to organize a gathering that violates the state's orders, it will not only narc you out to the police but it will ban you from ever using the site again.

"We have previously announced that we will not allow for hosts to authorize parties and events in regions where current public health mandates prohibit events and gatherings. Given the executive orders from Governor Dewine, our new policy means we are not allowing any type of party in Cleveland until further notice," the company said in a sternly worded press release this morning. "We want to be very clear — not only will we ban guests who attempt to throw an unauthorized party in a Cleveland Airbnb listing, we will be cooperating with Cleveland Police in any investigations relating to parties and violations of public health mandates, consistent with our Terms of Service."