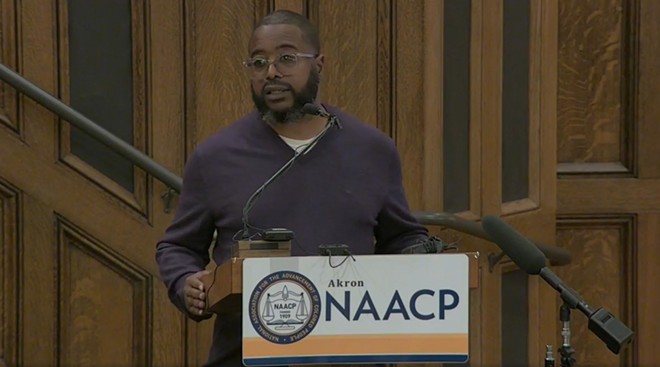 The Akron NAACP and other local organizers are leading the push for a city charter amendment establishing civilian oversight for the police department.

The ballot measure comes on the heels of the police killing of Jayland Walker, a Black man shot nearly 50 times by Akron officers after fleeing a traffic stop. Walker was unarmed at the time, but police recovered a gun in his car. They allege he shot at them during a car chase. State officials with the Bureau of Criminal Investigation are handling the case.

Despite that galvanizing event, organizers stressed their initiative is the product of years of work. Raymond Greene from Freedom BLOC cited the cycle of police killings and demands for reform beginning in 2007, and repeating in 2008, 2014, and 2019. But Greene argued the struggle for reform really stretches all the way back to the Kerner Commission report from 1969.

“The community stands together on this day demanding we move from empty promises of not the right time (or) honoring collective bargaining agreements, and move into real solutions,” Greene said.

What does it do?

The amendment in question would establish a new citizen review board with oversight of the city’s existing police auditor. The proposal also expands the auditor’s office and directs Akron City Council to spell out in statute what information the auditor can demand from the department.

City Council member Shammas Malik argued making these changes through the charter is important because it establishes a chain of command for police oversight separate from city council or the mayor’s office.

“It’s really crucial that the police auditor not report directly and not have their employment directly managed by the mayor or by city council,” he argued, “because there may be times when they need to disagree with the mayor or city council.”

What it doesn’t do

Asked what the review board could accomplish if it were already in place when officers killed Jayland Walker, Akron NAACP president Judi Hill pointed to relatively minor infractions leading to lethal situations.

“One of the things, which is one of the demands that we in the NAACP talked about: Look at, why are we chasing people for equipment stops?” Hill explained. Officers said they initially tried to pull Walker over because of an unspecified “equipment violation” and a “traffic violation.”

“If it costs the life of an individual, is it worth it?” Hill asked before adding those are “questions” the board could pose.

Nevertheless, the board would not be able to force the department’s hand on such questions.

Organizers appear poised to get their citizen review board on the ballot. According to a press release, they’ve turned in 7,000 petition signatures for the charter amendment. That’s more than two and a half times what they need.

State Sen. Vernon Sykes, D-Akron, sounded confident they have enough signatures and the requisite buy-in from city council to call a meeting and officially place the amendment on November’s ballot. Malik noted Akron adding a civilian oversight amendment to the city charter would put it in line with Columbus, which did so in 2020, and Cleveland, which followed suit in 2021.

Rev. Nannette Pitt from the First Congregational Church of Akron recalled growing up in South Africa and compared the struggle for police reform in the U.S. with the post-apartheid truth and reconciliation commission.

“I learned that healing and reconciliation cannot begin without truth — if we aren’t willing to speak and to hear the truth,” she argued. “No one should have anything to fear from citizen oversight if they have nothing to hide.”