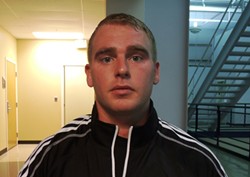 Courtesy the Akron Police Dept.
Akron police officer Adam Campbell will serve a year of probation for attacking a man outside the Wyndam Cleveland hotel at Playhouse Square last year.

He was found guilty of misdemeanor assault last month.

He also has to pay $1,000 restitution to 31-year-old Steven Crupp, who suffered six broken ribs, a cracked pelvic bone and a battered face in the attack. That's in addition to a $500 fine.

According to cleveland.com, Crupp says the incident began after Campbell attempted to hit on one of the women he was with at a bar. Another woman made fun of his antics, and that's when he came back with two other men to rough him up.

If Campbell violates his probation, he'll have to serve a six-month jail sentence. In the meantime, he's currently on unpaid administrative leave with the Akron Police Department.