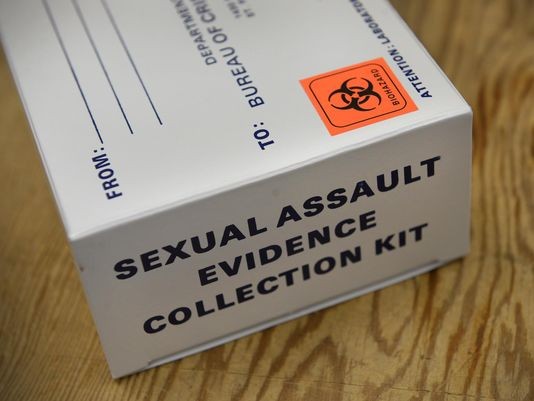 As it stands, the Akron police department does not have adequate staffing to effectively process the city's backlog of cold cases, many of which are related to 1,822 rape kits that have been tested since 2012.

How inadequate? There's one detective assigned to the caseload.

Results of the 1,822 rape kits have provided Akron police the names of suspects in 498 cold cases and genetic profiles in another 349, which may be cross-referenced with other crimes committed elsewhere in America.

The department plans to apply for a grant from the National Sexual Assault Kit Initiative, which is offered through the U.S. Dept. of Justice, Bureau of Justice Assistance.

Law Enforcement Planner Carol McCullough told City Council's Public Safety committee that if approved, the grant money would allow Akron police to launch a three-year initiative and build a team of investigators, and include a one-year administrative specialist. The grant money would also allow for a case management database specifically for cold cases, as well as the partial costs of a Summit County prosecutor and a victim assistance advocate who would work with the investigators.

All team members would be given specialty training in "Trauma Informed Sexual Assault Investigation and Prosecution" and "Forensic Experiential Trauma Interview."

Training like this is critical, as it offers a compassionate approach, takes into account the comprehensive needs of the victim and the varying effects such assaults can have on memory and perception.

Detective Bertina King is on the front lines of this initiative, having served on the Akron police force for more than 26 years.

This is no easy task for Detective King or the Akron police, given that she is but one person, and the age of many of these newly tested kits. According to the Akron Beacon Journal, there are 92 cold cases from 1998, which are fast approaching the 20 year statute of limitations.

Many of the victims of these crimes have moved. They may be difficult to track down or are unwilling to revisit the crime committed against them nearly two decades earlier. Convincing a victim to face their attacker is incredibly difficult, and every year that passes only makes this situation more difficult.

King told the Akron Beacon Journal that issuing a warrant based on the new DNA evidence, even if it’s for “John Doe,” has the effect of pausing the statute of limitations, buying investigators more time.

Case Western Reserve University determined that over half of the sexual assaults committed in Ohio are at the hands of serial offenders, and the results of the rape kits point to many serial offenders.

If Akron is given the funding to bring these perpetrators to justice, they will also be protecting future victims. King and the police department are hoping to end the backlog once and for all in Akron with the assistance of the grant.

Cleveland implemented a "test everything" approach in 2010, sending all rape kits in law enforcement storage to the Ohio Bureau of Criminal Investigation (BCI) for testing, regardless of the outcome of the original investigation.

Important to note, this doesn't mean that all of the rape kits tested are being pursued to completion. An internal investigation back in March revealed that 60 sex crimes cases went uninvestigated for more than a year, resulting in administrative charges against three officers, including two sergeants and a commander.

In 2015, the U.S. Department of Justice's Bureau of Justice Assistance (BJA) awarded the Cuyahoga County Prosecutor's Office $1,993,741 to address its backlog through testing kits, investigating and prosecuting cases and re-engaging survivors.

The Cuyahoga County Prosecutor's Office formed a DNA Cold Case Task Force to handle investigations that arose from testing backlogged kits. As of January 2018, the Bureau of Criminal Investigation has tested 6,824 kits submitted by law enforcement agencies across Cuyahoga County, resulting in the identification of 436 serial rapists and 701 indictments.