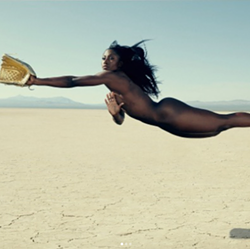 One of 23 athletes featured from a wide variety of sports, "modest" Andrews was initially hesitant to participate in the revealing shoot, she told the Akron Beacon Journal. But the softball powerhouse said she ultimately decided it would not only help her appreciate her own body, but that it might inspire other girls to gain body confidence as well.

The 24-year-old spoke to the Journal about the disparities between how male and female softball players are viewed by the public; Andrews said that while men are merely criticized for their performance, women are unfairly scrutinized for their appearances as well.

"As I got older I knew that I needed to get bigger and faster and stronger in order for me to be successful and excel in my sport," said Andrews, who used to try to hide her muscles after an off-putting comment from a fellow teenager. "I really began to embrace the fact that my muscles are beautiful and they make me who I am and they make me the athlete I am."

An accomplished softball player, Andrews is currently in her third season in the National Pro Fastpitch league. She's already appeared on SportsCenter, and last year, was the first female ever to win the Rawlings Gold Glove award.

Check out more of the Body Issue right here.