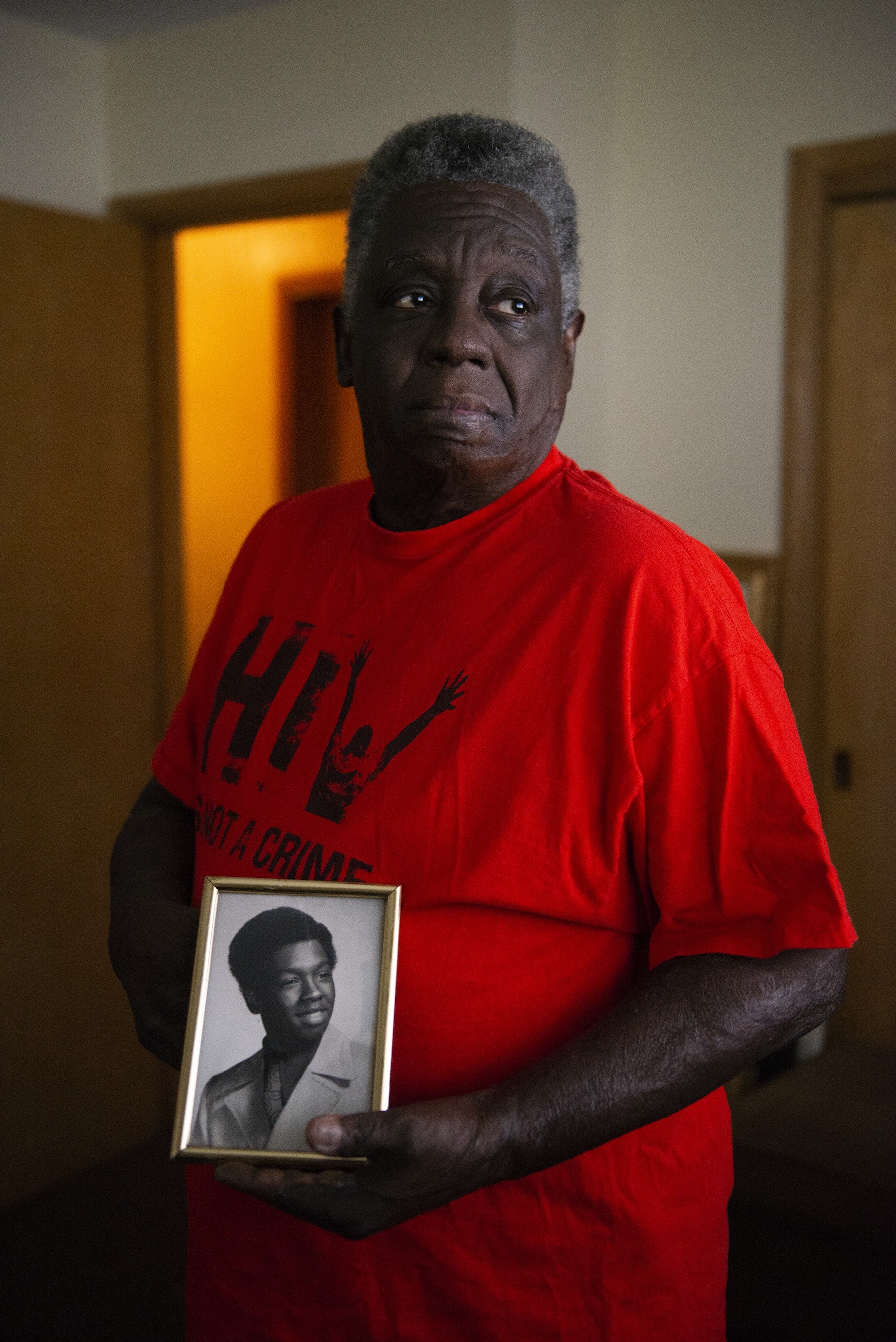 The year is 1977. Steve Arrington is 25 years old when he walks into his first gay club, Hide & Seek, in Colorado Springs. The music is crisp and everything is chrome: the tables, the bar, the chairs. Red, purple and green strobe lights illuminate a dance floor where men dance with men and women dance with women.

When Steve thinks about this memory, his eyes gleam with excitement. His voice, already loud, grows louder. His hands gesture wildly. For the 66-year-old man, this was one of the first moments in his life that made him into the proud gay man he is.

And when I say proud, I mean proud. Steve is not afraid to tell you who he is. He never whispers. And he doesn't believe in feeling shame about his identity, despite the societal stigma and his status as a "triple minority:" Black, gay and HIV positive.

When Steve says "life is short," he's not saying it because it's a convenient cliche. As someone who has spent more than half his life as an advocate for black men with HIV and AIDS, he's watched countless loved ones die, each new sorrow fueling his fight against the disease.

"I have a lot of friends who are dead and gone. I mean, a list. And they were all very close to me," he says.

Steve was diagnosed with HIV — a sexually transmitted infection that can lead to AIDS — in 1988, only a year after the ACT UP Movement (AIDS Coalition to Unleash Power) started, and two years before the Ryan White HIV/AIDS Program of 1990. HIV/AIDS was only just starting to receive the national attention it needed to generate money for research, awareness and education.

But black men with the diagnosis had to deal with stigma within the black community and the black gay community, all while facing racism from the larger community.

And there was Steve, newly diagnosed with "AIDS-related complex" — a term used in the early years of the AIDS epidemic to diagnose HIV — and trying to find a way to cope. Meanwhile, his partner was diagnosed with AIDS at a time when being diagnosed meant you were going to die.

"One day I came home and Doug was laying in bed, semi-comatose. He was sick, and I didn't know what to do. I called 911. I called his mother. I stayed in the hospital the whole day. I spent the night there. I'll never forget this. I'll never forget this for as long as I live," says Steve. "I loved that man's dirty drawers. I've been blessed that way to find people who are very loving, very protective, very embracing of me."

Steve launched into HIV/AIDS advocacy in the two years between Doug's diagnosis and death.

Advocacy work was not foreign to Steve, who says even as a student at Bowling Green State University, he was known as an activist. He started the first Black Student Union on campus.

Steve credits much of his personality and activism to his parents, who he describes as "very direct and honest." Steve grew up in Massillon, his father working at Republic Steel in Cleveland and his mother working as an occupational therapist. When Steve came out to them, his mother said, "Well, that's your life. You do what you do."

His father's response still makes Steve laugh: "My dad told me, 'Okay. What else is new? You ain't the first one!'"

After finishing his degree at Bowling Green, Steve visited Colorado Springs for a trip and was introduced to Hide & Seek before deciding to stay in Colorado. Eventually, Steve moved to Denver after being introduced to its nightlife.

"I was like 'Ooooh! This is really good. This is where I want to be.' They had the big, black gay clubs. It was just a different world," he recalls.

Denver is where Steve met Doug, and where he spent the majority of his time as an activist. But in the late '80s, Steve wasn't aware of the powerful stigma against HIV/AIDS that existed in the black community — and even in the black, gay community — until he visited an AIDS service office with his friend. During  that time, being diagnosed put you on the fringes of society and made you an outcast.

"I asked the director, 'Are there any African Americans that have HIV?' She said, 'Sure.' And I said, 'Well, I don't see none around.' She says, 'They're not here, but they're out there.' And I'm like ... well, where are they? Why aren't black folks walking around here? And I knew then, something's wrong. That picture. The stigma of it is so overwhelming."

"And [my friend's] family lived with so much of the stigma of it that his own mother told him to tell everybody he got cancer," Steve says. "At that time, 1989-1990, that's what they were saying. 'Oh. You got cancer.'"

Soon after this incident, the AIDS agency in Denver invited their clients, including Steve, to a Broadway show on tour and gave everyone free tickets. During intermission, Steve noticed other black people he knew from the city and connected the dots. It was obvious where these people got their tickets. Suddenly, Steve was surrounded by a community that had stayed hidden for so long.

Days later, Steve invited many of those men to his house to talk about how to end the stigma.

That's when Steve and his friends Raja Southall, Stanley Daughter and Roy Winbush created the Men of Color, an educational program targeted at black gay men. For about 15 years, Steve stayed in Denver, working at various mental health organizations, as well as the Urban League. There, he established his grassroots work helping fight the AIDS epidemic.

Steve moved to Akron in 1997. Over the years, he's continued the Men of Color Program with Murtis Taylor Human Service System in Cleveland. He's also worked with Planned Parenthood, along with serving as the director of Akron AIDS Collaborative, where he continues to advocate for black gay men in Akron with HIV/AIDS and beyond.

But the work is never easy, and Steve's HIV continues to take a toll on his health, both physically and mentally. Steve says dealing with symptoms of HIV while aging is difficult.

"People need to understand [that] HIV is a machine that never cuts off," he says. "It's running your metabolism double time, every second of every minute of every day. And you notice that. But friends are letting me know I'm outliving everybody. And that's why I look at my life as a calling because just about everybody I know from Denver is dead."

Just three months ago, Steve lost his partner, Jose, of 30 years and is still grieving. When I met him in his home for our last interview, he was tired and his body was stretched out on a recliner. I asked him how he was taking care of himself. He tells me he's done. He wants to move back to Denver and retire.

"I don't have the zeal that I had last year," he says. "I almost have an attitude of 'I'm done.' I'm tired of taking medicine. I'm in a very rough place in my life. Mentally, I'm suffering from depression. I feel a little bit lost."

Steve says he's exhausted from trying to help people with HIV take it seriously before it's too late. Initially, it feels like he's being harsh, and his tone is angry and unforgiving.

"If I told you the number of people who I deal with, and how they just refuse to accept that this HIV is a part of their lives, and you can have a choice: Either you can drive the bus or let the HIV drive the bus. But if HIV drives the bus, you're going off the cliff," he says.

Later, it becomes clear his anger is coming from a place of deep sadness. Toward the end of our interview, he received a phone call from a friend in Columbus — a 32-year-old man with HIV who wouldn't take his medication and is now dying. Steve has been mentoring him for years.

"Why don't you got a top on? Aren't you cold?" Steve asks the caller. "Well, did they give you how long? So they're not going to give you no treatment? You listen to me. You give those doctors my number. And if anything happens to you ... ." Steve begins to cry. "We'll get you back here, baby."

Steve is often the first person that men in Akron and beyond call after receiving news or needing help during a crisis. His life is a testament to how the AIDS epidemic is not over, and the work is not finished. And though it's often difficult, Steve continues to love.

"My purpose in life is to be loved and to love," Steve says. "I tend to gravitate toward people who are in need or in crisis, and then I get emotionally attached to them and I love them and I want them to be happy."

Steve has developed AIDS and is thinking about taking a medication break.

"I'm living on strength now. I'm living on God's strength," he says. "As long as I can do the ministry — and I call this work  a ministry — there are people that need to be helped. There are people that need to be educated. God's gonna keep me around to do that. And when my time comes, it comes. But I'm pretty much done. Most of my loved ones, other than my mom, have moved on."

Originally published by The Devil Strip, this story is reprinted here with permission.