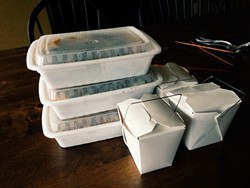 Flickr CC, Brad K.
Update: Tracey McCloud has been sentenced to three days in jail, and was fined $250 for dialing 911 to report a medicore dining experience at a Chinese restaurant earlier this summer.

Sources close to Scene say she didn't care for the coffee at the police station either. -AN

Last night, an Alliance woman thought her Chinese dinner was so bad it was criminal.

After settling in for an early dinner, 44-year-old Tracey McCloud dialed 911 around 4:30 p.m. to report her emergency: She didn’t enjoy her meal.

According to Alliance Police, McCloud called complaining from inside Main Moon Chinese restaurant that her food was “not to her liking." No word yet on what dish she felt was illegally terrible.

Calling for emergency assistance for anything less than an emergency is against the law. The grumpy gal was charged with misuse of 911, a fourth-degree misdemeanor. She’ll appear in court on Friday to defend herself.

Of course, reaching out to 911 for anything other than a legitimate emergency is discouraged by police, even if your sweet and sour chicken sucked.

Brittany is a blogging intern who keeps the web up-to-date with news stories and blogs. Before her internship at Cleveland Scene, she wrote for the video game news site Revue Labs as well as oversaw Kent State University’s diversity publication Fusion Magazine. Brittany is originally from New Jersey but is currently...
Read More about Brittany Rees
Scroll to read more Cleveland News articles