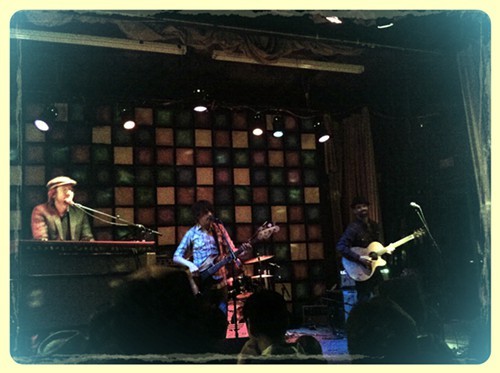 To be clear, by the time the ukulele started shooting green lasers into my eyes, it was well past that most hallowed of also-ran holidays, "4/20, maaan."

But then, of course, there was the rum to account for.

ALO's set at Beachland Ballroom last night - the first step into Cleveland proper for the band, after all these years - was a whirlwind of tight musicianship and expansive improvisation. In fact, singer Zach Gill pointed out deep in the evening that this was one of the band's *jammier* sets of late.

Guitarist Dan Lebowitz, known to the crowd as Lebo, was on an ascendant plane throughout the night. He was rocking a hollow-body ax replete with warm, enriching sounds - producing tones he has referred to as "rootsy-adventurism."

And that flair for the adventurous prompted plenty of runs to the bar for more rum. At times, the band's jams conjured images of faraway beaches framed by leafy palms. For instance, "Girl, I Wanna Lay You Down" started off as a relaxing nod to love, but it soon evolved into an organ-driven calypso jam with Lebo really taking the melodic reins. Likewise, the blissful improv in "Barbeque -> 1999 -> Barbeque" was top-notch stuff, equally capable of transporting listeners to the calming shores of some distant summer.

The latter included some really great stage banter about the Waterloo Arts District. "The man in the toy store said they're gonna put $4 million into this street. And it's gonna be beautiful...And I'm gonna make an agreement with you. In 10 years, we're gonna meet back at the same time and we're gonna check it out.," Gill told the audience (though we hope he and the back return sometime before another decade passes). Additional banter throughout the night included bassist Steve Adams saying that he had had a "Cleveland feeling" before the show, alluding to the truly special jams the band was tossing around onstage, and Gill going on about his ties to Youngstown and Beaver Falls, Pa.

The band's encore included an extended take on Paul Simon's "Graceland" with Lebo throwing down some amazing slide guitar work.

For those who missed out, ALO and the Ryan Montbleau Band will continue to stream their upcoming shows live online.

Blew Out The Walls
Walls of Jericho
Speed of Dreams
I Love Music
Girl, I Wanna Lay You Down
Shapeshifter ->
My Favorite Things
They Love Each Other
Hot Tub
Try ->
Shine
Falling Dominoes
Plastic Bubble
Barbeque ->
1999 ->
Barbeque