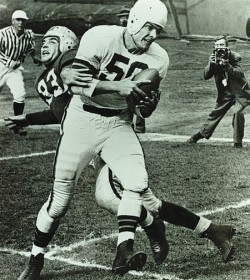 <i>Browns great Dante Lavelli died January 20 at age 85. The Hudson native had been a star receiver for Hudson High, then Ohio State and then — following a torturous tour of duty in World War II — the Browns. In 1946, he had a perfect season, catching all 40 passes thrown to him. After his time in the pros, Lavelli stayed in the area. When Browns owner Art Modell moved the franchise to Baltimore in 1995, Lavelli attempted to organize fan boycotts and harangued Modell in public and private. Author Alan Natali profiled Lavelli in his 2001 book Brown’s Town: 20 Famous Browns Talk Amongst Themselves. Upon Lavelli’s passing, Natali reflected on the Hall of Fame inductee.</i>


His name was Dante, and, goodness knows, he had been to a level of damnation that the rest of us pray we never see. He was there with the 28th Infantry, the “Bloody Bucket Division,” in the Ardennes on that sulky iron-gray December morning in 1944 when Hitler ordered the Wehrmacht to turn and attack the Allied army that had been pursuing it since D-Day. Dante Lavelli — 21, a strapping star athlete from Ohio — crouched in his fox hole as a thunderous artillery barrage shattered the dawn and buried the living in debris and blew the dead apart from their souls. He repeated the Lord’s Prayer for three days while the 5th Panzer Army streamed by. Weakened by dysentery, shell-shocked, he withdrew with his unit, walking backward across Belgium at night, listening for the creaking treads of German tanks that churned down the iced roads four abreast. He passed the frozen corpses at Malmedy, where the Nazis machine-gunned scores of American prisoners.

Finally, after seven days, he saw the clouds lift and the skies blue and the P-47 Lightings swoop down like silver dragons breathing napalm.
Fifty-three years later, at work on a book about Paul Brown, Lavelli’s coach at Ohio State and in Cleveland, I pulled into a frowsy strip mall on Center Ridge Road in Rocky River. A Browns helmet, “86” and “Dante” had been painted on one wall of Lavelli’s Furniture, which abutted a dance studio. Bedsteads, couches and recliners cluttered floor space. Duct tape held plastic sheeting over windows and ceiling vents. Lavelli, the NFL Hall of Fame receiver and all-time Browns great, owned the store, but he also served as “driver, delivery man and window washer.”

He looked like the proprietor of a New England antique shop: grey herringbone jacket, tan corduroys, flannel shirt buttoned at the throat, bifocals dangling from a chain around his neck, suspenders, thick white hair. He was 74 and had undergone bypass surgery 15 years earlier, but he looked two decades younger and was energetic and mischievousness. During a long interview, I had to pry from him any mention of  WWII. He didn’t refuse to talk about the war; rather, he seemed not to have thought much about combat since mustering out.

I transcribed the tapes, reorganizing a bit, paring some, but otherwise leaving verbatim the story of his journey from penniless ex-GI to key player in 10 consecutive All-American Football Conference and NFL title games. I sent him a copy. He called later and said, his voice filled with little-boy wonder, “That’s a really good story, huh?” — as if he had been reading about someone else.

When the book was done, the publishers contracted with Lavelli to join me at a string of book signings. He always insisted on driving, just as he had always insisted to his lifelong friend, quarterback Otto Graham, that he was open on every play. One lovely fall afternoon, we were riding back from southern Ohio in Lavelli’s Lincoln Continental with the “Mr. Glue” (for his nickname, “Gluefingers”) vanity plate. He stopped at a country store to buy apples and cider, and after we had piled our selections near the cash register, I pulled out money. “I got it,” I said, handing the clerk some bills.

“No,” Lavelli said. I ignored him and shoved the money across the counter.
“No,” Lavelli barked, his normally soft voice shrill. He gripped my forearm with those famed hands — the ones Brown said had an almost “liquid softness” — and they suddenly became the hands of his immigrant blacksmith father, and they crushed bones and nerves and blood vessels so abruptly and powerfully that I went weak in the knees and nearly dropped to the board floor. We got separate checks. The man paid his own way.

Somewhere I have a picture of myself standing beneath the electronic billboard at the NFL Hall of Fame. Lavelli had somehow convinced the hall to allow me to sign books there. The billboard reads: “Today Only Alan Natali.” It was only a day, but it was my day in Canton, and I will always owe Dante Lavelli for it.

In one of his more famous on-field antics, one time Lavelli hooked an arm around a goalpost, whirled 360 degrees and caught a touchdown pass. When I heard last week that he had died, I thought about that play and hoped that  “Old Spumoni,” as Graham called him, was open in some other end zone, waving his hands and yelling for the ball.