An Exit Interview With Adam the Bull, Who Departs 92.3 The Fan on April 1 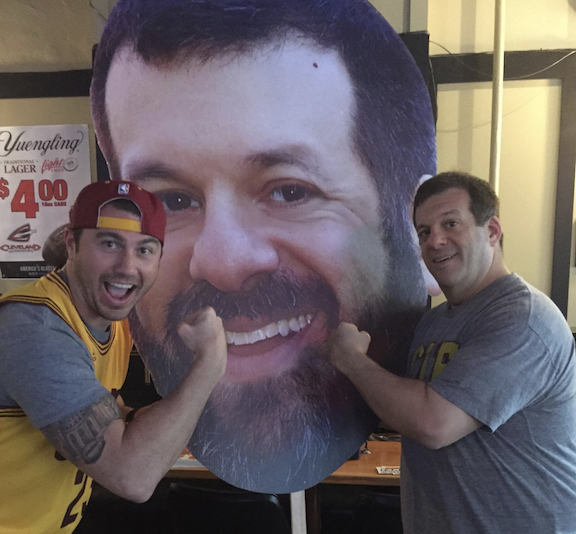 After more than a decade on Cleveland airwaves, Adam the Bull announced this week that April 1st will be his last show on 92.3 The Fan. We chatted with him about the decision, his time here and what it's all meant to him.

What's up next for you?

I just want to take some time off, catch my breath and then move on to the next thing.

I just felt like I needed a change and I want to do something different. I may even delve into other things, maybe politics, maybe talking about being a man with weight issues, branching out to other things. Now was the time but nothing specific beyond I thought it would be a better time for the station than in the summer and right before football season. I'm leaving the station on great terms and I wanted them to be able to have time to find someone. I want them to be in good shape going into football season.

Personally, and I'm sure others feel the same though I'm not sure how many of us there are out there, I want to say thanks for talking baseball on the radio in Cleveland.

The game hasn't helped itself, but in Cleveland it's also specifically hard, whether it's the team's performance or front-office decisions, or lack there of, or the fact they're clearly the third most popular bunch in town.

I think it's tough to talk about baseball. Obviously, compared to New York where there's just more passion for the game, here there's more passion for football. It's tricky. You have to find the balance. In football, every game means everything. Baseball doesn't work that way, so it's hard to overreact to a baseball game. It's also about finding the balance talking about stats that really matter without boring the audience. A lot of people don't understand analytics, so it's hard to find the right mix. And a lot of it is the team itself, especially the last year or two. It doesn't even seem like they're trying.

When do you think you and Dustin hit your rhythm?

I would say fairly quickly. I would say about a year in. We liked each other right away. Our relationship personally has always been really good, even when we bust each other's balls on the air. It's never personal and it's never serious, and I think that showed. Dustin was learning to do radio in the beginning and I was learning to work with a partner, because I had mainly worked solo before I came here. We found that sweet spot about a year in, and it showed in the ratings.

You and Dustin have anything special planned in the last little stretch before you leave?

We just started talking about it a little bit, but I feel weird planning it. I've never had this experience, really. When I was in New York I wasn't full time and I'd go back and fill in after I left. This is going to be very emotional. We'll probably reminisce. It'll be very emotional for both of us. He was emotional when I made the announcement on the air, and he already knew, and then I started getting emotional. We're like brothers; we're very close. Same thing with Keith our producer. We've been like a family. It's tough to give up. I'm going to miss a lot of things.

You remember the date of your first show?

August 29, 2011. I remember it. I was so fired up for that show, it was crazy. I remember getting home that night and I could barely stand up I was so exhausted from doing five hours.

It is. I'm kind of done with that.

You already have a massive platform to tell everyone how you feel as you leave but for people who won't have a chance to listen to these shows, what do you want to say?

Whatever I end up doing next, whether I stay in Cleveland or go somewhere else, the city and the people will always hold a special place in my heart. My son was born here. It's the longest job I've had in my life. When I came here I had experience but not this kind of experience. It's been great. When I made the announcement, the response I got on Twitter and emails and texts, it blew me away. I was really touched. You don't realize the effect you have. I'm just doing a sports show, but we share our lives and the stupid things we do and personal stuff and you connect with people and they feel like they know you. To get these responses, so many people saying you got me through the pandemic, or you got me through this hard time — obviously there were some really dark times for everyone — the response is really meaningful.

I'll miss those relationships and moments, and there have been so many great moments to remember, from LeBron coming back to the Cavs winning the championship and all the Finals runs and the parade day and the World Series and the remotes we've done downtown and the fans being bananas. It wasn't an easy decision. It was tough. This is tough to give up. I just need to do something different. That last day is going to be... ugh, hard. And I've only got seven shows left — today, Wednesday and Friday next week, and then Tuesday through Friday that last week. It's going to be tough to get through. I've loved my time here, on and off the radio.