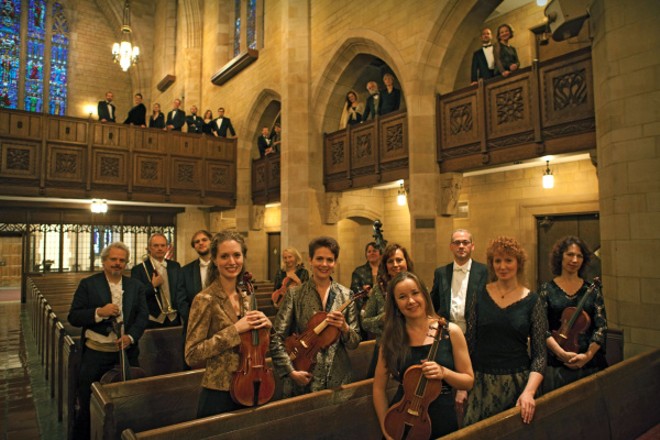 Not the famous Three B’s, but B’s nonetheless will be featured on Friday, October 12 at 7:30 pm as Trinity Cathedral presents its fall choral concert. The French Boulanger sisters will be represented by Nadia’s Three Pieces for Cello and Piano (featuring Pamela Kelly) and Lili’s Pie Jesu. The second B belongs to the late English composer Edward Cuthbert Bairstow and the U.S. premiere of his Variations for Violin & Piano (featuring Isabelle Durrenberger). B number 3 is the best known — Leonard Bernstein’s Chichester Psalms completes the program. Todd Wilson conducts and plays piano, and harpist Jody Guinn and percussionist Andrew Pongracz will join the Cathedral Choir and organist Nicole Keller for the Bernstein. A freewill offering will be received.

Apollo’s Fire begins its season by dipping into the Viennese Classical period with “Magnificent Mozart.” Jeannette Sorrell conducts a big period instrument orchestra in the Overture to La Finta Semplice, Symphony No. 40 in g, and the Ballet Music from Idomeneo. An extra treat will be the first movement of Haydn’s Sinfonia Concertante in B-flat featuring four soloists from the Orchestra. There are two local performances: on Friday, October 12 at 8:00 pm in Gartner Auditorium at the Cleveland Museum of Art, and Sunday, October 14 at 4:00 pm in Mixon Hall at the Cleveland Institute of Music. Tickets are available online.

The CIM Orchestra will continue its parade of guest conductors on Friday, October 12 at 8:00 pm in Kulas Hall at the Cleveland Institute of Music, when William Eddins will lead the ensemble in Joseph Schwantner’s Chasing Light and Béla Bartók’s Concerto for Orchestra. Molly Wise will take the spotlight as soloist in Krzysztof Penderecki’s Viola Concerto. The performance is free.

Canadian violin virtuoso James Ehnes and pianist Andrew Armstrong are up next on the Oberlin Artist Recital Series on Sunday, October 14 at 2:30 pm in Finney Chapel. Ehnes will play Oberlin’s recently-restored 1772 Strad, and the program will include the earliest published violin works by Beethoven (Sonata No. 1 in D, Op. 12, No. 1), Ravel (Sonata No. 2), Brahms (Sonatensatz), and John Corigliano (Violin Sonata). Tickets are available online.

Another choice for Sunday afternoon would be the next Music From the Western Reserve performance at Christ Episcopal Church in Hudson. At 5:00 pm, classical saxophonist Steven Nicholas Banks will team up with his Baldwin Wallace colleague, pianist Christine Padaca Fuoco, in Astor Piazzolla’s Milonga del Angel, Fernande Decruck’s Sonata in C-sharp, and David Maslanka’s Sonata. Tickets are available online.

Looking into next week, Akron’s Tuesday Musical will present the celebrated countertenor Anthony Roth Costanzo with the equally celebrated Montréal ensemble Les Violons du Roy in a wildly contrasting program of music by Philip Glass and George Frideric Handel. The performance is on Tuesday, October 16 at 7:30 pm in E.J. Thomas Hall, and you can book seats online.