Articles of Impeachment Drafted Against Gov. DeWine By the Worst Conservative Ohio Lawmakers 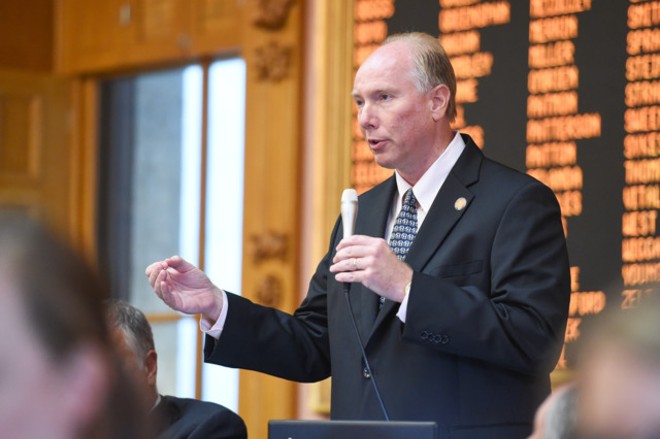 The articles of impeachment are co-sponsored by State Reps. Paul Zeltwanger (R-Mason) and Nino Vitale (R-Urbana).

Becker told Ohio's Statehouse News Bureau that the move to impeach DeWine was launched today, "so he's not sure of the number of his colleagues who might support the move."

In a press release, Becker says:

"Among his abuses of power, (DeWine) meddled in the conduct of a presidential primary election and arbitrarily closed certain businesses, while allowing other businesses to remain open. He later instituted a statewide mask mandate, implementing that requirement as a condition of employment, making Ohio a hostile work environment. The mandate also extended to congregants at places of worship, forcing citizens to choose between worshipping their God and worshipping at the altar of unbridled government. Many Ohioans find the mask mandate offensive, degrading, humiliating, and insulting. There is also evidence that masks can be hazardous to one’s health. Gov. DeWine doubled down when he expanded the mandate to our school-age children, who are less susceptible to COVID-19."

Co-sponsor Vitale ratchets things up a notch, saying on his Facebook page, "Articles of Impeachment do not go far enough for me. While it’s a good step, Dictator DeWine needs to be charged and tried for crimes against humanity, in my opinion."

There is a website with information about why the three reps want to impeach DeWine. It includes the articles of impeachment, which Ohio reps have or have not jumped on (so far, it's only Becker, Zeltwanger and Vitale) and how to contact your state representatives should you want them to support DeWine's impeachment. (It also has a nifty graphic featuring Gov. DeWine in a face mask behind Photoshopped prison bars, giving off some Hannibal Lecter vibes.)

You can click impeachdewine.webs.com to read all 10 articles of impeachment/the general shitshow.

DeWine's office responded to the drafted articles of impeachment in a statement saying, "Governor DeWine is focused on saving lives during the pandemic. He is focused on helping the economy and getting Ohioans back to work. That is what he is focused on. Not this."

House Minority Leader Emilia Strong Sykes (D-Akron) also responded, saying, “Instead of working to rebuild the public’s trust or calling the House back from summer recess to address the very real public health and economic crises Ohio currently faces by focusing on protecting small businesses and slowing the spread of COVID-19, Republicans continue to fight one another over political power."