When it comes to the arts, Cleveland's like the guy who never reaches for a bar tab. 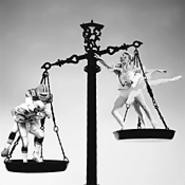 That Cleveland sits at the bottom of lists for public funding of the arts is no surprise. It fits with our image as a city where a United Auto Workers jacket is suitable wedding attire. Art, in the Cleveland sense of the word, is best depicted by a quick slant good for seven yards and a first down.

Yet our reputation as the Epicenter of Virility has long been tarnished by the presence of some embarrassingly good arts organizations. Take the orchestra, the art museum, the second-largest theater district in the country -- all world-class caliber. This isn't just the opinion of chamber of commerce boosters, who think high art is the plastic family of deer on their lawn in Strongsville. This is the judgment of deep guys around the country. People who likely wear ascots.

It all goes back to the early 1900s, when the Rockefeller crowd, needing someplace to go, created many of the institutes that still stand today. "Up until about 1970, Cleveland had some of the highest [philanthropy] in the United States, and this was particularly true of arts and culture," says Tom Schorgl, president of the Community Partnership for Arts & Culture.

Then came a period of darkness, which historians refer to as That Time That Really Sucked. The city's industrial giants either collapsed or left town. Most every company that helped build The Cleveland Play House's palace in 1983, for example, is gone today. And when Newt Gingrich and his boys slashed social service funding in the 1990s, those groups began chumming up to the same foundations arts groups had long tapped.

For those of you scoring at home, the math goes like this: More groups + fewer rich guys = we can't pay the rent.

This isn't to say all arts organizations are now drinking malt liquor under the viaduct, talking about their glory days. The Cleveland Museum of Art, for example, has an endowment of $679 million. The orchestra, $100 million-plus.

Left behind are groups like the ballet, which has gone to San Jose, and smaller theaters and art houses who could use a hand from the government -- a hand they would get elsewhere in the country. According to Schorgl, San Jose spends $18 per capita on public arts funding. Denver, $14. Even Austin, which is in Texas, which is to culture what Euclid is to Parisian fashion, spends $9.

The tally for metro Cleveland: 64 cents.

If that's not bad enough, Cleveland actually forces nonprofits to subsidize Browns Stadium -- a.k.a. The Monument to Welfare by the Lake -- by paying an 8 percent tax on parking fees. "I don't know of any other city in the country where nonprofits subsidize professional sports," says Dean Gladden, managing director of the Cleveland Play House. "It's ludicrous," admits Councilman Matthew Zone.

There is reason for our tight-assedness. For one, we're broke. For another, the arts don't hold much political cachet. Most telling is a survey commissioned by the Partnership, which found that, while 97 percent of Greater Clevelanders believe the arts a source of community pride, 60 percent never attend events. In short: They're swell, just don't make me go.

Dump the blame on the organizations themselves. Art tends to be a self-indulgent game, yet artists, in defiance of the laws of economics, seem to believe they're owed support. Message: "Hey, I'm doing deep stuff over here; you should give me money."

Fact is, most organizations couldn't attract Ma & Pa Cleveland if they offered free liquor and HBO. While deep guys might enjoy seeing yard-sale remnants welded together and called an "installation," regular people call it a "scam." Which makes public funding easily painted as welfare for goofy rich folk who don't know when they're being ripped off.

There are, however, compelling arguments for public funding. It is, after all, a $1.3 billion industry in Cleveland, according to Schorgl. Though such figures usually contain amplified math -- under similar calculations, your dog generates $495,000 in economic activity -- more telling is that 3,700 people are employed. If we had a factory of this size, we'd be tossing around money like conventioneers at a strip joint.

Zone sees the arts as a development tool. He points to West 64th and Detroit, where Cleveland Public Theatre is in the process of renovating a 1912 vaudeville house. It's the kind of development that may someday transform the tattered neighborhood into "the West Side Coventry," the councilman believes.

The arts also make for good education policy. A UCLA study showed that kids with heavy arts exposure did better in English class, and Gladden notes that the Cleveland School of the Arts has the highest attendance and highest graduation rate, and sends the most kids to college, of any school in the district.

Unless theater groups start running shows like Law & Order: The Musical, the arts will never capture the imagination of regular people. 'Tis the fate of playing a highbrow game in these wonderfully lowbrow times. "I don't think dumbing down is something we'd ever want to do," says the Play House's Julie Fogel.

Nor is big funding from the city probable. "I don't want to give anybody a false sense that we can do what the millionaire magnates did at the turn of the century," says Councilman Jay Westbrook.

Unfortunately, Cleveland has always been a half-step behind in seeing the future. (Motto: "If it's only partially broke, let's wait till it's irreparably &^%$#@* before we fix it.") Yet the arts are one of the few things in which we truly shine. And all these organizations are asking is that we just think smart. As Gladden notes, "You need to support the things that work in your town."