Black men make up 7% of Ohio's population, but account for 64% of the state's gun homicide victims 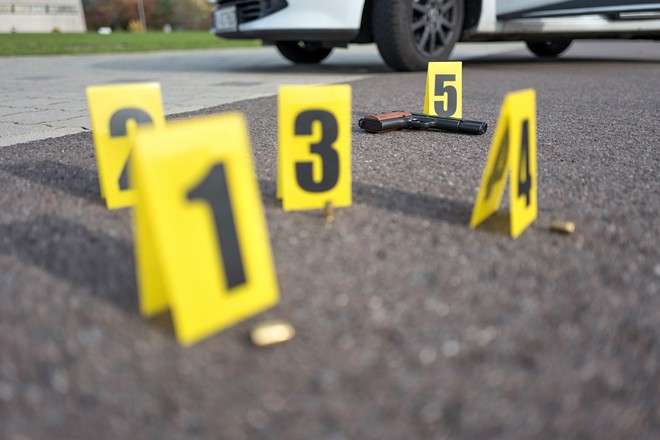 (Adobe Stock)
The firearm homicide rate in Ohio among Black males, ages 15 to 34, is 25 times higher than white males of the same age group.

Kendra Byrd was born and raised on Warren's east side. Gun violence hit close to home for her in 2009 when her nephew was shot and killed. His murder has not been solved.

Byrd, who teaches at Warren G. Harding High School, is concerned that gun violence in her Northeast Ohio city has increased over the last several years.

Former students of Byrd's have been killed due to gun violence in the city, as well.

"It is so traumatic. That's the part of education they don't teach about. How many kids do I have to watch have shorter lives?"

Gun violence has been recognized by the Centers for Disease Control and Prevention as a public-health issue. More than 1,400 people are killed by gun violence each year in Ohio, based on data from the CDC and FBI presented by the Giffords Law Center. And that number is trending upward.

Black Ohioans are disproportionately impacted by gun violence and the firearm homicide rate among Black males aged 15-34 is 25 times higher than white males of the same age group. Black men make up 7% of Ohio's population, but account for 64% of the state's gun homicide victims.

Community gun-violence is a form of assault that takes place between non-intimately related individuals in cities and neighborhoods, according to the Educational Fund to Stop Gun Violence, a nonprofit that researches its effects. Black and brown communities are disproportionately affected by gun violence as the result of income inequality, easy access to guns by individuals living in high-risk areas, underfunded housing and poverty.

"These guns find their way into low-wealth, low-resource neighborhoods in a way that good education and jobs seemingly cannot," said the Rev. Dr. Jack Sullivan Jr., the executive director of the Ohio Council of Churches.

The OCC, based in Columbus, is a partnership between a variety of religious organizations throughout Ohio. Gun violence reduction work is the group's priority-it partnered with the Ohio Coalition Against Gun Violence organization and is approaching the problem by educating the public about the crisis of gun violence and vocalizing its concerns and plans with the state.

"They're working with people to talk about both policies and practices, raise issues with our legislators and our civic leaders to get them to enact what some people say are common sense gun laws," Sullivan said.

Between 2017 and 2021, there were 47 homicides in Warren-more than 90% were committed with guns according to the city of Warren's annual report. Over the last two years, the police department's Street Crimes Unit conducted house raids, made traffic stops and used confidential informants as a strategy to target those suspected of possessing illegal firearms.

"We were able to take a record number of illegal guns off of the streets," said William D. Franklin, the city's mayor. "Over 400, plus illegal weapons, and we had them destroyed."

Franklin and the Warren Police Department established the Police and Community Trust Initiative in the summer of 2020 following the murder of George Floyd. The initiative is a coalition between residents and law enforcement officials that focuses on building unity. The group consists of community activists, educators and members of the clergy who were selected by Franklin and Eddie Colbert, who is the director of Public and Safety Service.

"We have set out an initiative to try to increase and promote police and community relationships to build better relationships between the community and law enforcement," Franklin said. "That's an ongoing process."

A spike in gun homicides in 2022 led Warren residents to request formal meetings with city leaders and law enforcement officials to express their concerns about the rise of gun violence in their neighborhoods and the need for better security and protection.

Helen Rucker, the councilwoman at large in Warren, said the city took their concerns into consideration and took action.

"Warren was in a financial position where we could step up," Rucker said. "We have been going through a financial crisis for over 10 years. And now we're able to buy new equipment, new vehicles and cameras and that sort of thing that these residents are asking for. So we've been able to respond better."

In 2020, the homicide rate in Cleveland increased by 42%. Between 2017 and 2019, almost 90% of homicides were committed with firearms. There were 61 homicides in Cleveland through June 2022-52 of those homicides involved a firearm. In early June, Cleveland Mayor Justin Bibb addressed the issue of gun violence in the city at a press conference, demanding state legislators take action on stricter gun legislation.

"As the mayor of Cleveland, I feel paralyzed and handcuffed by the lack of real comprehensive gun legislation in Congress," Bibb said, "and the fact that we have a state that doesn't give me, as mayor, the tools I need to combat the illegal traffic of guns that plague our city, day in and day out."

The city will use a grant of $1.7 million from the governor's office to pay for programs to keep adolescents out of gangs, to help expand violent crime reduction teams and to buy the National Integrated Ballistics Network, a national database of digital images of spent bullets that are used to match weapons to gun-related crimes.

Like Warren, the city of Cleveland is also attempting to build a bridge among Cleveland law enforcement and its residents. In 2021, Cleveland voters passed cIssue 24, which gave civilians more control of police discipline and policies. The Cleveland Community Police Commission was established in 2015 by a consent decree with the U.S. Department of Justice (DOJ), following a 2014 investigation of the Cleveland Division of Police. Its purpose is to bring input from residents of Cleveland communities on the process of police reform.

"I think we've got to figure out a way to get good jobs with good benefits [and] good salaries into communities with low resourcing [and] low wealth," Sullivan said, "and help people to have the ability to have sustained lives and communities that are renewable sources of income that keep them going and keep them afloat."