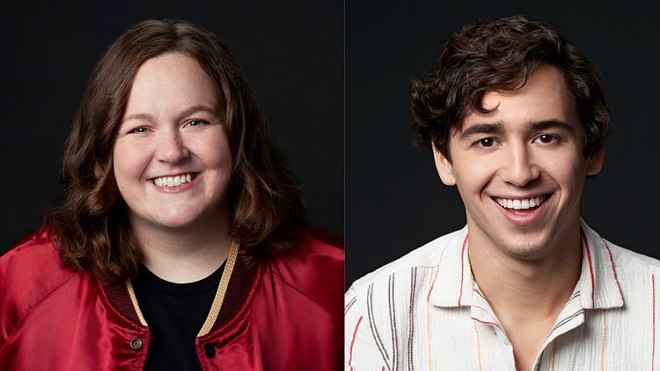 Hernandez has performed at numerous venues throughout Cleveland including Hilarities at Pickwick and Frolic. Kearny relocated to Los Angeles from Cleveland and currently stars as Fern in Amazon's original series “A League of Their Own.” She’s also expected to have a recurring role in the Disney+ Mighty Ducks spin-off “Mighty Ducks: Game Changers.” Both performers came out victorious in the Comedy Central “Up Next” showcase in 2019.

Despite local excitement, both Hernandez and Kearney had limited appearances on SNL's season premiere. They both got some early screen time, along with fellow newcomer Devon Walker, during the cold open, which was a spin on ESPN’s Monday Night Football Manning Cast.

Kearney and Hernandez could be seen doing “the Griddy,” to which Andrew Dismukes, in character as Eli Manning, quipped: “Just a humiliating attempt at relevancy.” That was their only appearance in the sketch until the full cast arrived on scene to announce, “Live from New York, It’s Saturday Night!”

That was the one and only time audiences got to see Hernandez during the premiere, but Kearney was later featured in a sketch that spoofed the Nicole Kidman AMC advertisements. The off-putting yet enjoyable sketch consisted of Chloe Fineman appearing as a Nicole Kidman lookalike offering a rendition of the famous actress’ well-known ad in an exaggerated Australian accent.  Keenan Thompson arrived, standing in for the audience's befuddlement as the tone of Fineman's recitation changed. The camera panned to Kearney and other cast members, who followed Fineman's lead in cultishly chanting the ad's famous tagline: “Somehow, heartbreak feels good in a place like this.”

Perhaps the biggest impression by a new cast member came during Weekend Update. Longtime co-host Colin Jost introduced Michael Longfellow and asked about his thoughts on “Euphoria” star Sidney Sweeney’s parents being ridiculed for their apparent support of former President Trump. Longfellow gave honest, yet comical, insight about growing up in a conservative family.

There were other highlights from the premiere, including the game show “Send Something Normal,” which poked fun at the recent Instagram DM adventures of Maroon 5 front man Adam Levine, and a stellar performance from Kendrick Lamar and “Father Time” collaborator, Sampha.

If you’re hoping to catch the new SNL cast members with Cleveland connections, be sure to tune into NBC for Saturday Night Live this weekend at 11:30PM on NBC. Actor Brendan Gleeson will be hosting, and the episode will feature performances from musical guest Willow.