Attack of the Puritans

Legislators launch a full-frontal assault on strip joints. And the point is...? 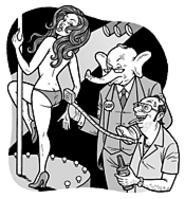 Danny Hellman
Frank Maenza is talking about how, despite alcohol, strobe lights, throbbing dance beats, and topless women, this fantastical paradise known as the Diamond Men's Club is all about order.

His walkie-talkie interrupts him with a crackle. A voice on the other end reports that a dancer wants a glass of wine.

It wouldn't be worth mentioning except that three months before, the dancer had too much to drink. She didn't break any of the club's myriad rules, but her precision and discretion appeared suspect -- enough for the manager to threaten her job. A drink, insofar as it might lead to brushing a customer's lap during a table dance or accepting someone's business card, is a risky indulgence.

Another dancer, a blonde in a lacy white corset, approaches Maenza to plead her friend's case. Just one. Please? Her friend hasn't had a drink in three months. Maenza relents. But for the rest of the evening, the woman is closely monitored.

Excessive drinking heads a long list of taboos here. Drug use, dating a customer, touching a customer anywhere between the shoulders and knees -- all are forbidden. Maenza once fired two dancers for touching each other onstage. Their act was a crowd-pleaser, but it came too close to simulating sex, which doesn't fly under state law.

Rules are just as inflexible for customers. The grab-happy drunk is shown to the parking lot, but Maenza says the majority of his customers exercise impeccable restraint.

Running a strip joint requires constant vigilance. "Control is everything," says Maenza solemnly. When it's run right, each night comes to the same harmonious conclusion: The customers smile on their way out the door, and the dancers leave with bikinis full of cash. It's all about pleasing consenting adults.

To a coterie of state legislators, however, this is dangerous.

Two new bills -- one in the House, one in the Senate -- would impose new, possibly fatal restrictions on Ohio gentlemen's clubs. They would bar dancers from coming within six feet of patrons. They would preclude them from accepting money unless they were in street clothes. And any club featuring nudity would have to close by 10 p.m.

The bill's title evokes images of a call to arms against a common menace. What that menace is remains to be seen. Roman has yet to offer evidence that strip clubs are wreaking havoc on Ohio. Nor will she say how new rules would prevent violence. When Scene called for an explanation, neither she nor Senator Ron Amstutz, a Wooster Republican who authored the Senate version, responded to repeated interview requests.

Yet Tim Spencer, who along with wife Angelina operates the Circus on the Flats' East Bank, says legislators are merely running errands for the Christian Coalition and other Bible-thumpers. "They have a really deep pocket, and their goal is to combine church and state," he says, "because that's what God would want them to do. 'Ohio Taliban' is what I call them."

Adds club owner Jim Hannan: They "seek to regulate our industry to extinction."

Be it for religious beliefs, fears of degrading women, or the simple chance to score easy points with voters, public officials have been trying to snuff out the sex trade for as long as there have been public officials. In this case, however, Roman and Amstutz appear to be adding regulations where regulations already exist.

As it stands, strip clubs are among the most restricted businesses in the state. Customers' ages are checked at the door. Signs tell them exactly what type of entertainment the club offers. Dancers must prove adulthood with a driver's license. There is a round of interviews, a list of rules to sign before a dancer is allowed onstage. And while owners may place "help wanted" ads, they don't need to recruit, much less coerce.

"Nobody drags them in by the hair and says, 'Get on the stage and dance,'" says Tim Spencer.

Nor do dancers view themselves as exploited -- at least unwillingly. Ashley, who performs at the Diamond, considers her job one part "Vegas showgirl," one part model. "In a certain respect, we're choosing to exploit ourselves. We come in, we show a beautiful body for money."

Yet the bills don't center on the age-old exploitation debate. Roman and Amstutz seem far more concerned about violence and economic development -- issues their detractors say are downright foolish. Because club owners are already worried about heavy government scrutiny, strip joints tend to be less troublesome than conventional bars, they argue.

"The ones we've had the least problem with, as far as [crime and violence], are the gentlemen's clubs," says Tom Newman of the Flats Oxbow Association, a trade group for Flats merchants.

Al Spencer says the same is true on Brookpark Road, where police spend the majority of their weekend nights at rowdy bars and are seldom required at the clubs he owns.

(Brook Park Police did not respond to interview requests. A Cleveland Police spokeswoman said it would take weeks to research the matter.)

Claims of passivity are backed up on a recent night at the Diamond, where patrons appear more lethargic than lusty. It's as if they're watching a movie. Servers bring food and drink to the table. Customers needn't move for hours, and they often don't. Chris, a regular, says fisticuffs are rare. "I've been going here for seven years, and I've only seen two minor fights -- and that was just friends who got drunk and fought each other," he says.

"You're safer in a gentlemen's club than you are in a Catholic school," scoffs Al Spencer, who owns the Crazy Horse and other adult clubs.

Maenza's security force monitors a series of cameras for possible troublemakers. The most common conflict occurs when a patron's hands start wandering. "If he touches her in any sexual manner -- I don't care if he just spent $5,000 -- he's gone," says Maenza.

Ashley, who's also danced in Texas and Florida, says that when she leaves for the night, she's escorted by bouncers. "They make sure the parking lot is clear," she says. "They walk us right to our car. I feel very safe here. That's why I stay."

A six-foot distance rule might add another layer of safety, but Ashley is vehemently opposed. "I worked under a three-foot rule once, and it ruined the business," she says. There were fewer customers and even fewer tips.

Representative Ed Jerse (D-Euclid), a co-sponsor of the House bill, admits the new rules would defeat the purpose of adult entertainment. "It's like shutting down a sports bar in the middle of a football game," he says. But he's seen TV exposés that show touching between dancers and patrons, and he worries about prostitution. "At what point do you cross the line between paying for a dance and paying for unlawful physical contact?"

Yet Tim Spencer says these issues are covered by existing law. "We have public nuisance laws," he says. "There's pandering, obscenity, lewd and lascivious behavior. Why do we need this legislation to cite dancers and owners for things that are already banned?"

Drugs and prostitution are some of the "secondary effects" Roman cites in her bill, but these, too, are already against the law. And since owners know that revelations of either could lead to the club's closing, they have every incentive to police themselves. At the Diamond, management tips off police if there is reason to suspect either offense. At the Circus, the Spencers have encouraged Cleveland cops to bring in drug-sniffing dogs.

Roman's legislation warns of "urban blight," of "negative impact on neighborhoods," and the "threat to families and communities." But zoning laws already prevent adult businesses from locating near schools, homes, and churches, so most congregate in entertainment districts. Even then, one must be at least 1,000 feet from another, according to city ordinance. And given the robust business most do, it's hard to imagine conventional retail stores bringing in more sales tax revenue -- especially when strip joints are largely restricted to less-than-desirable areas.

If anything, owners believe they're an asset to Cleveland's economy. Civic boosters may talk about a convention center to attract out-of-towners, but owners note that Las Vegas, Atlanta, and other cities become convention havens in part because of their wide range of adult entertainment.

"A Lolly Trolley and the Rock and Roll Hall of Fame, that's all we have to offer," says Al Spencer. "And people aren't going to come from out of town to go to Ms. Roman's barbecue."