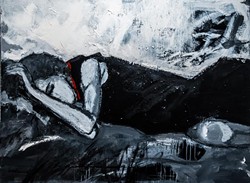 Carlson
From 7 to 9 p.m. this Friday, Feb. 5, BAYarts hosts opening receptions for its latest exhibitions, Timothy Joyce’s Facing Forward and Shari Wilkins’ and John W. Carlson’s Destruction of Form. Both exhibitions utilize and explore the repurposing, or upcycling, of materials and ideas. Through their individual creative processes, each artist re-contextualizes imagery, materials, objects and ideas from our everyday lives into something new and unexpected.

Timothy Joyce repurposes discarded materials to create his abstract portrait and figure drawings. His work resides in private collections in Los Angeles, San Francisco, Dublin, Berlin and, of course, Cleveland. Joyce was born in Cleveland, and studied at Cleveland State University, before earning his Master’s in Irish literature and drama from University College in Dublin. Following graduation, Joyce spent seven years working in Hollywood with the Motion Picture Association of America. In addition to his artwork, his latest CD, A Living Man, as well as Stone Mad, a collection of recent poetry, will be available at the opening.

“I use materials found in junk shops, painting over cheap reproduction pictures, house paint, spray paint, you name it,” Joyce explains. “Upcycling is the new expression I guess. It pleases me to give what is discarded a new life. My single intent is to make the viewer feel what the expressions of the pictures contain.”

“(BAYarts Executive Director) Nancy Heaton saw the show in its inaugural run at the Cleveland Print Room in July-August of 2015,” Carlson says. “She was impressed and very excited by what she saw and said she would love for the show to come to BAYarts. I remember her commenting, as other viewers had on the flow of the work and how seamless it was to navigate the transition between the two different mediums. Nancy's mission for some time now, I believe, has been to bring a wider and more contemporary range of art and artists to Bay.”

Wilkins and Carlson hope to continue traveling Destruction of Form throughout the region and beyond. In September, FORUM Artspace at 78th Street Studios will host the exhibition, with the artists creating new work for this third incarnation.

Carlson continues: “Both Shari and I know how innovative and exciting this work is, and made a conscious decision to take DOF to other venues around the city (including FORUM Artspace in September 2016 with some new added work) and the state of Ohio. Nancy and Karen made the decision bring it to BAYarts. We also knew, because of where it's located on the far west side of Cleveland that another and different group of visitors could experience the show. Nancy told me to contact Karen Petkovic and get it on the calendar. We did that and have been working closely with her to make it a success. We are excited to have this work reach another audience and we very much appreciate and thank Nancy and Karen for the opportunity to make this happen.”

The exhibition includes both collaborative and individual work by Wilkins and Carlson. Both found inspiration for this exhibition in vernacular photography — with Wilkins directly altering the surfaces of the photos to reconstruct their form and imagery, and Carlson creating accompanying paintings and drawings inspired by these found photos, but reinterpreting their creator's original intent.

Carlson said he became fascinated with vernacular photography after seeing the Cleveland Print Room's Lost & Found exhibition the previous summer. "I was curious as to the motives behind the shots of the unknown, amateur photographers who took photographs of everyday life and common things as subjects,” Carlson told Scene before the opening at the Cleveland Print Room last summer. “Initially, Shari showed me photos that had strange compositions and over the top gestures in which I sought clues to their meaning."

Describing the re-/upcycling nature of this creative process, he added, “We’ve altered the original photograph’s premise. It may be presumptuous of me to know the purpose of the photo, but when the premise of the photo is destroyed it becomes an entirely new piece of art. A lot of this is about perception.”