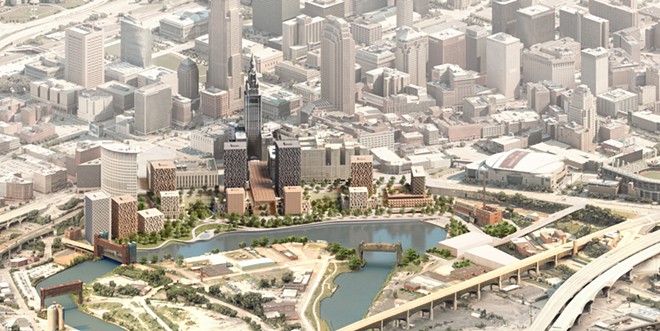 Photo / Adjaye Associates
A rendering of Tower City's possible coastline in 2040, released by Bedrock on Friday.

Following a string of initial releases in 2022, Bedrock today announced its refined plan for the Cuyahoga riverfront for the next 20 years. In a press conference panel that was spearheaded by Bedrock owner Dan Gilbert, architect David Adjaye spoke of activating 35 acres of land south of Tower City at a $3.5-billion price tag.

Along with architectural drawings, Gilbert's team presented their plans to boost downtown walkability and livability: 2,000 new residential units and 850,000 square feet of office space, including a new Tower City Center marketplace that, as Bedrock's press release promised, "will mirror the architectural presence of boulevards and covered markets around the globe."

Like Mayor Bibb's Lakefront Plan, currently undergoing public tinkering via six town halls citywide amidst other planning, Bedrock's lofty makeover also vows to build with Cleveland's entire population in mind. That is, by building a half dozen new RTA stops, "interior and structural updates" to Tower City, and "eliminating obstructions" on Huron Road. Creating, in essence, a new hub for pedestrians, as Mayor Stokes' Tower at Erieview promised to do in the late '60s and early '70s.

But, to Bibb, the Riverfront will be built, and, "It won't just be a national model, but a global model for how to create equity," he said at Friday's press conference, "in terms of master planning, and how to truly make sure our waterfront —and our riverfront—can be a model for the nation." 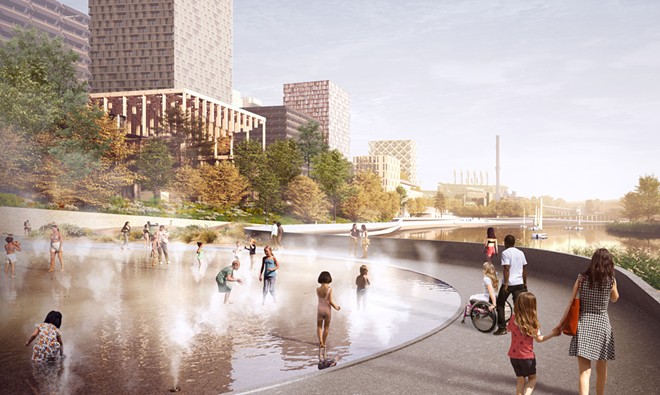 Photo / Adjaye Associates
A rendering of Tower City's possible coastline in 2040, released by Bedrock on Friday.
Like the myriad civic makeovers that came before it, from Mayor Tom L. Johnson's Group Plan in 1903 to Stokes' "Cleveland:NOW!" in 1971, Bedrock's $3.5 billion pitch to Clevelanders will only come to fruition if dollars are raised at the right time.

Much the same as the planned Irishtown Bend park plan, Bedrock needs to first secure millions in funding for sewer rerouting and riverside bulkheads before anything concrete can proceed. And like other major projects, a public-private partnership is assured.

But even if a new bus facility is built, and EV chargers installed, locking down state or federal dollars does not always guarantee drawings will match reality. (Of Tower City's multi-building Riverview extension plan, for example, only one new building was built  — the Stokes Federal Courthouse, in 2000.)

The whopping price tag and Cleveland's notorious relationship with "master plans" aside, the project comes with starpower in the form of David Adjaye and Kofi Bonner, the two architects who helped produce Bedrock's plan. Both have shining credits to their name—Adjaye, the Smithsonian National Museum of African American History; Bonner, Emeryville, Cali.

According to them, glimmering luxury apartment towers alone won't bring Cleveland's core to its fifties-era vibrancy.

"As I became more deeply immersed," Bonner said, "the need to build a more tempered flow of movement through the city became immensely clear."

The intention, Bonner said, is to reclaim Cleveland's "lost heritage" by "establishing a new relationship between the urban core and the shore."

Whether or not that relationship works out, we'll have to wait for 2042.