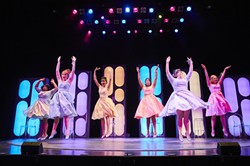 There’s a reason why booking agents don’t create some of the best stage musicals. It’s because…they’re booking agents. In defiance of that logic, Great Lakes Theater has decided to grace their stage with a musical created by booking agent Larry Gallagher, and it lives up to what you might expect from a guy who spends his days arranging tours and planning events for his clients.

Titled Beehive, the 60s musical, the show is a chronological tour of music from the 60s as recorded by women—singles and groups. With all the creativity it takes to buy the rights of other people’s songs, and then add snippets of flimsy connecting narration that probably took all of two hours (including lunch) to write, the show is a lazy pastiche that would get shrugged off as lame entertainment on most discount cruise ships.

But here it is, at the prestigious Great Lakes Theater, featuring a cast of young performers from Baldwin Wallace University under the guidance of BW faculty members Victoria Bussert (director) and Gregg Daniels (choreographer). And it all couldn’t go much farther wrong than it does.

In the first short (45 minute) act, the girls croon tunes from the early 60s about heartbreak and such. And while it isn’t offensive, there’s little to recommend it. The cast—Adrianna Cleveland, Annalise Griswold, Shelby Griswold, Christiana Perrault, Camille Robinson, Hannah-Jo Weisberg—all sing acceptably well. Each of the performers is given character names for no apparent reason, since we learn virtually nothing about these “characters.”

It’s all about the songs, which are staged by Bussert and Daniels with little imagination on the almost bare stage, backed by some less-than-dynamic backlit panels that—wait for it—sometimes change colors! The women go through their 60s paces, from “It’s My Party” to “My Boyfriend’s Back,” lining up this way and that, swinging their arms languorously and throwing in some hip rolls for good measure. In short, it ain’t exactly galvanizing. And in a show desperate for some eye candy, costume designer Esther M. Haberlen’s soft pastel, below-the knee dresses are changed midway through the act for…almost identical soft pastel dresses.

After an extended and unnecessary intermission, in a futile attempt to give the brief play the time-span heft of a more fulsome production, the women reappear in snappier outfits representing the end of the miniskirt 60s. In this even shorter 25-minute act, the performers are called upon to impersonate some famous singers of the time. Robinson, Perrault and Cleveland do pretty well with this as Tina Turner and others.

But it all comes apart during an extended feature segment when Shelby Griswold is called upon to impersonate Janis Joplin. Eschewing the soulful gravel of Joplin’s voice for loud volume, Griswold shreds the magic that Joplin created on stage. And wearing a faux tie-died pants suit from Marshall's while sucking from a bottle of Southern Comfort doesn’t make it right.

If you can’t do a kickass Joplin impression (which was done in this Hanna Theatre building more than ten years ago by the remarkable Katrina Chester and later by the exceptional Mary Bridget Davies starring in Love, Janis), then don’t make it a spotlight segment. Just sing the songs Gallagher stapled together and be done with it.

As talented as the kids from BW can be, you’d think GLT could find some quirky end-of-the-season show that could employ their stable of talented and experienced professional actors. That would be a treat. And we could let Larry Gallagher get back to setting up banjo act gigs in Altoona.