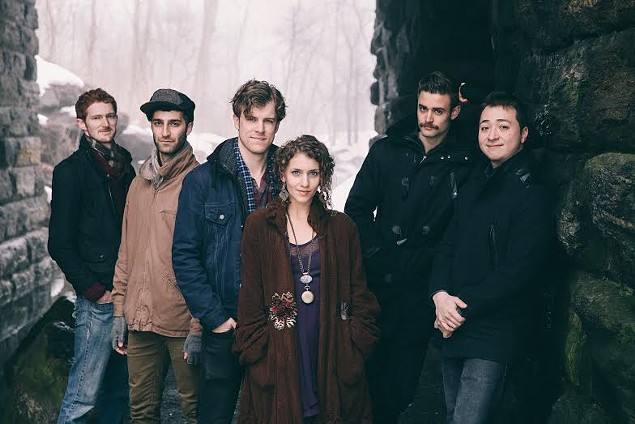 Cleveland, the second stop on  5j Barrow's "very very very very very very very very first tour"  is also hometown to lead vocalist Eryn Murman  and keyboardist Eric Namaky. As such, the performance was in many ways a Thank You to local supporters who helped finance the band's first album and tour and launched them to "Best Band in New York City" in WNYC's Battle of the Boroughs competition.

Murman and co-founder Jason Hite (guitar, vocals) are both Broadway alums, and in fact all the band's performers hail from various theatrical backgrounds. So it's no surprise that in many ways, 5j's biggest jams seem more like numbers than just songs. They've drawn comparisons to both Of Monsters and Men and the Avett Brothers, but in their rollicking "This Too," a highlight of the high-energy second set, the closest musical parentage was probably Glen Hansard and Mirketa Irglova of the The Swell Season, in particular their hit from Once, "When Your Mind's Made Up," a number which found equal electricity and guitar-string-popping verve in its stage adaptation.

(Hite actually busted a string himself, but managed to multitask with aplomb through the next song).

The diversity of instrumentation, vocal styles, song pacing and the narrative tendency of the lyrics (to say nothing of the performers' surprising range of personal motion, given Nighttown's thin stripe of stage) all lent the show a certain contemporary off-Broadway song-cycle vibe, something the Decemberists or The Indigo Girls might cook up for a change of pace.

Murman spent 18 months in the cast of Duncan Sheik's Spring Awakening, and as 5j's principal lyricist, she leans on the same earthy/spiritual imagery found in that show. Glowing harmonies galore, folks.

Tonight, the band will offer a free master class of "movement and live music" to the dancers at The Dance Centre in Rocky River. We're told the master class will include both yoga and improv dancing.

Here's 5j Barrow's opening track on their album From the Dim, Sweet Light.