Big Egg on Its Face

For better or worse, the West Side greasy spoon was a Cleveland landmark. Not anymore. 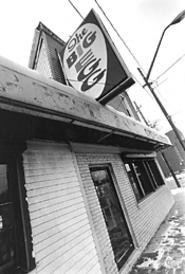 Walter Novak
Hamadeh says he won't sell his property, so the Big Egg's shell will remain.
It was a dive that somehow became a legend, a Cleveland thing that wouldn't make sense anywhere else. For decades, the people who dined at the Big Egg and the people who complained about it were one and the same. They loved it because it was so bad.

In the Big Egg's 24-hour-a-day heyday, devotees included drunken Flats revelers and down-on-their-luck insomniacs. Their common bond was an unstoppable 3 a.m. craving for something eggy. "It was dirty and it was greasy," says Tim Suskowicz of University Heights. "But it was always packed." It was perhaps the only eatery to win Cleveland magazine's Silver Spoon Award and get shut down by health inspectors just 14 months later.

The Egg's era is now officially over. Its license expired March 1, and owner Sam Hamadeh says he made no effort to renew it. "It's going to be a shock for the city of Cleveland. But they don't deserve it here."

The restaurant, at Detroit and West 52nd, changed significantly in recent years. A remodeling job removed the open kitchen and the breakfast counter. Hamadeh replaced the egg-shaped, pun-heavy menu with a more traditional booklet. He also chopped the hours, opening only from 7 a.m. to 3 p.m. Some days, it closed even earlier, but there were few customers to notice.

When citysearch.com included the restaurant on its Cleveland pages, nine critics responded in the harshest of terms. "The Big Egg is a big crime," one anonymous user wrote. "How does this place get put on the list? They need to go under cover there and put these people behind bars." The first user gave it five stars; no one else gave more than one. A website purportedly belonging to the St. Ignatius crew team ridiculed the restaurant for its health violations and mossy food.

In the last six years, city health inspectors cited the Big Egg for 75 violations, according to city records. Willie Bess, Cleveland's acting environmental commissioner, says cleanliness improved after the hours were reduced, but a December report still included citations for roach hatchlings, dead mice, and a broken dish sanitizer. When the sanitizer still hadn't been repaired by February, Bess promised to close the place on March 4 unless Hamadeh could prove it was fixed. Hamadeh didn't. Instead, health inspectors visiting March 5 found the place closed.

Hamadeh blames the restaurant's slide on forces beyond his control: the neighborhood, health inspectors, and the media. The French-born Syrian says he bought the place in 1996 after seeing its bustle and thinking it might be fun. He is proud of its history. "It's the oldest restaurant in Cleveland," he says at one point. When asked how old, he shrugs. "Since 1920, I think." (His own menus set the date at 1954.)

Hamadeh says patrons were driven away by devastating PR the Big Egg encountered in 1997. That July, the city closed the place for five days, citing some 42 violations. The problems made it into The Plain Dealer and TV news; the results were catastrophic. "When they tell people not to visit a place, no one will," Hamadeh says. "It did long-term harm." He briefly ran TV commercials to combat the reports, but they weren't enough.

He curtailed hours soon after, he says, because he worried about safety. Despite gentrification in nearby Ohio City, the Detroit-Shoreway neighborhood still carries a look of sagging neglect. Even residents find it scary at night. "The city and the police district couldn't control the neighborhood at that time, and you can't do business with crime," Hamadeh says.

He still can't reconcile how the place Cleveland magazine readers voted Best Non-Chain Breakfast in Cleveland in 1996 could be so reviled. "They can't say you are a nun and a whore at the same time!"

Yet even former fans aren't crying over the restaurant's demise. They stopped going there years ago. "I've grown past the party-in-the-Flats stage," Suskowicz says. "The Big Egg doesn't interest me anymore."

"Back then it was fun, but it was the only place you could go to," says Tremont resident Steve Evangelista, who remembers the eatery as "dirty and scummy" even in its prime. Now, he says, the late-night crowd goes to Dianna's or My Friend's Deli on the Lakewood border, both of which seem safer.

Hamadeh didn't exactly charm the neighborhood, either. The West Side Ecumenical Ministry, a nonprofit agency next door, has feuded with Hamadeh since it moved to Detroit in 1998.

Hamadeh owns the parking lot abutting the agency. He seems to relish towing cars mistakenly parked there, says Chief Operating Officer Adam Roth, even when his lot is empty. Nearly every other week, the agency spends $70 to retrieve a towed car. "We don't want to be bitter about it, but you can be legal or you can be neighborly," Roth says. "We work very hard to raise the money we have, and for every car he tows, that's 15 families we're not feeding. And that's very unfortunate."

Hamadeh is now off to bigger and better things. He says he is opening a new $14 million eatery called Cleveland Big Egg on International Drive in Orlando, Florida. "We just put the sign on." But the city of Orlando has no record of the building project. When informed of this, Hamadeh says he actually meant International Drive in Kissimmee. The city of Kissimmee, however, says International Drive doesn't extend to its limits, and neither Osceola County nor Orange County has any record of such a restaurant. Hamadeh refuses to supply either the address or the name of the corporation that will own it, although he swears the project exists.

He has no plans to sell the Detroit Avenue Big Egg. "People are closing all over the city because they don't think it's worth it to do business here," he says, gesturing out the window at the bleak cityscape. "This will just be another empty building now."