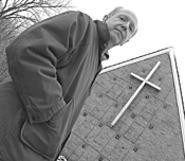 Walter Novak
Sam Dittmar, a gay Christian, questions so-called conversion therapy.
Knute Larson, the senior pastor at the Chapel, projects an image more Rotarian than evangelist. In television commercials, the easygoing Larson proffers an invitation to know Jesus Christ as though he were promoting a retirement village or a liberal-arts college. No fire, brimstone, or shiny suits.

Larson's neighborly approach works. The nondenominational Chapel was already Akron's largest church when, last spring, it opened a second campus in Green. In some ways, the Chapel is to Akron what the Catholic Diocese is to Cleveland: the big religious show in town. The Akron Beacon Journal heralded the opening of the Green sanctuary on the front page.

And like the diocese, the Chapel does not always welcome the attention it receives. In October, the Akron Area Interfaith Council criticized the church for offering a course on Islam, advertised in a flier as armament for the "spiritual battle for the hearts and souls of our Muslim neighbors." The council interpreted this as an effort to convert Muslims, an interfaith no-no.

Of course, the Chapel does not belong to the interfaith council -- it's a world unto itself. Actually, two worlds. The church is fascinating for the way it straddles the secular and sectarian realms. It's like a political candidate who beckons to the middle with one hand while shaping the other into a hardliner's fist.

The worldly Chapel enjoys its position as an Akron institution -- even the name exudes a certain ecumenism. Larson is a frequent speaker at the City Club and has formed a public friendship with the Reverend Ron Fowler, who ministers to a black congregation at Arlington Church of God. When vandals struck a Kent mosque in 2002, Larson called for "peace and love to rule the day." Emanating professionalism, sincerity, and calm, Larson has spoken critically of Bible-thumpers ("Nobody gets nagged into the kingdom," he said once) and poked fun at evangelists who hang on the word "Gawd" when they speak of the Almighty.

"Instead of endlessly quoting minutiae from the Bible, he puts it in laymen's terms and doesn't make people work real hard to figure out what he's driving at," says Beacon writer Bob Dyer, who profiled Larson a few years ago. "He's a good speaker. He's a handsome guy. He doesn't sit up there in the pulpit and spew out these things. He mixes it up with people."

The otherworldly Chapel, in contrast, thinks and acts more rigidly. This Chapel doesn't "mix it up"; rather, it draws a sharp line between the saved and the godless. This was the Chapel that couched its course on Islam in terms of a "struggle . . . against the powers of this dark world and against the spiritual forces of evil in the heavenly realms." This Chapel also believes that homosexuals can pray away the gay and, with the help of a support group, "strive to discover their own true heterosexual identity as they were created by God."

Certainly, homosexuality confounds many a church. Last summer's confirmation of a gay bishop divided Episcopalians. Congregations approving of gay and lesbian relationships must decide whether to bless same-sex unions. But in advancing the notion that change is possible for people who "struggle" with homosexuality, the Chapel has left the mainstream for fundamentalism. The American Psychiatric Association sees no evidence that sexual orientation can be changed and has stated its concern about the "potential harm" of so-called conversion therapies.

The Chapel rejects such expert opinions. A brochure for Genesis, the support group, states the belief that "homosexuality, or many types of it, are in fact evidence of arrested emotional and gender identity development . . . Genesis believes that people who struggle with homosexuality are broken in their capacity to love others according to God's original intent."

The Chapel's teachings appear to coincide with those of a church advertising salvation with depictions of a bloody Jesus on the sides of semi-trailers. The Church on the Rise in Westlake -- whose trucks parked alongside I-90 ask motorists whether they're "Hurting? Confused? Addicted?" -- offers a 12-week change ministry called Freedom From Sexual Brokenness. As the trailers suggest, Church on the Rise is not bashful about what it believes. A church representative responded promptly to Scene's requests for information about its "ex-gay" ministry. Chapel officials, however, declined to speak to the paper.

Exodus International, which touts itself as the world's largest Christian referral and information center dealing with homosexual issues, is careful not to state unequivocally that gays can be made straight. Instead, it offers "hope for change for men and women who do not want their sexual orientation to be homosexual," which sounds a lot like self-denial.

Indeed, abstinence is not healing. John Paulk, a leading "ex-gay" who appeared on the cover of Newsweek, was spotted and photographed at a gay bar in Washington, D.C. Two Exodus founders left their wives for each other. Members of Courage, the British version of Exodus, gave up on the notion that homosexuality constituted rebellion against God. The group is now gay-affirming.

Perhaps aware of the limits of the Holy Spirit, Larson has seemed ill at ease discussing homosexuality with those outside the church. He told Dyer he's merely preaching what the Bible says. "I teach the same thing on heterosexuality: 'We're all immoral, let's just not practice it.'" Speaking to a Beacon reporter on another occasion, he said homosexuality is "no bigger a sin than others." Yet the Chapel does not appear to offer a support group for bacon lovers (Leviticus 11:7) or women who adorn their hair and put on fine apparel (I Peter 3:3).

Of course, transgressions like swine-eating and gold-wearing fail to resonate with today's evangelical Christian. In wanting to gratify his base without seeming radical, Larson resembles President Clinton with his approach to the don't-ask, don't-tell policy for gays in the military. "He realizes it's a real flash point," Dyer says. "Obviously, you don't get that big without trying to cater to a lot of different segments of society, so I think he is a wee bit uncomfortable with that stand. On the other hand, in his mind, it's pretty clear. He's not going to pull back from it, but he's not going to stand on the soapbox and beat it to death."

The course on Islam similarly exposed the publicly mainstream, privately fundamentalist Chapel. Ihsan Ul Haque, a cardiologist who serves as spokesman for the Islamic Community Center in Cuyahoga Falls, says he doesn't have a problem with the Chapel offering such a course. The language of spiritual warfare, however, he found "inflammatory." Haque says: "By implication, it was that one side was the force of good and the other side was the force of evil. To me, that was bothersome."

Haque wrote Larson a letter expressing his concerns. In a response, Larson retreated from the suggestion that Christianity is at war with Islam. "We certainly do believe there is a battle for the hearts and minds of people, and I know you agree with that," Larson wrote, according to an account in the Beacon Journal. "It is a battle to get to the truth. But we are not battling you, and we hope to remain friends."

In his letter, Larson invited Haque to have coffee. He did not, however, invite Haque to address the class. The 10-week course, Larson told the Beacon, is taught with love, understanding, and tolerance. The input of actual Muslims seems to be another matter. David Loar, the pastor at Fairlawn-West United Church of Christ, questions the intent of a religion course that by all appearances excludes the religion's practitioners from the discussion. "Is the purpose of the class to understand Islam, or is it to seek to evangelize people, to get converts? If it's the latter, well, then it's not going to be something you're necessarily going to approach the Muslim community about," Loar says.

It may be that the course proposes neither to understand nor to evangelize, but to pander. Surely, the Chapel's Islam course-takers -- 99 percent Christian, according to what Larson told the Beacon -- leave believing they chose the superior religion. With the church as an institution in decline, the Chapel and other congregations seem to have reached for a script perfected by talk radio. As Loar explains: "Folks trying to save the church figure, to keep the church going, they've got to be more condemning of those they don't see as with it."

And no condemnation plays like the denunciation of homosexuality.

Sam Dittmar, a systems analyst who lives in West Park, repressed his feelings for the same sex for 30 years before deciding that Christianity and homosexuality needn't be exclusive. Dittmar considers himself evangelical. He appreciates "genuine Christian teaching," the kind he might receive at the Chapel. But would the Chapel let a gay man usher or teach a Sunday-school class?

Dittmar is dubious about conversion therapy. He suspects that the "recovered" ex-gays are abuse victims who have been able to change destructive behavior. Dittmar worries for the rest, the ones who feel they must choose between their spirituality and their sexual orientation. "I would hope people in the ex-gay ministries would open their eyes a little and keep watch over people who leave the program, as well as the quote-unquote success stories," he says.

Dittmar met once with two Genesis leaders and offered to minister to the men and women who fall away from the group. After all, isn't homosexuality and a walk with Christ superior to homosexuality and no Christ at all?

But since the meeting, Dittmar has not heard from anyone at the Chapel. "There was no contact after that," he says. "No referrals."