Board of Zoning Appeals Rules in Favor of Ohio City, Denies Permit to McDonald's 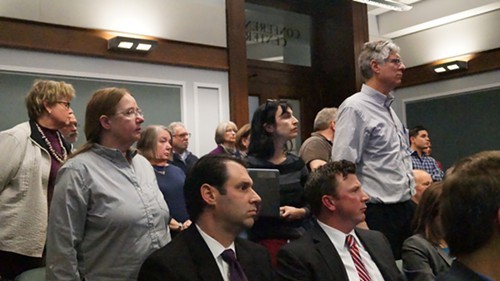 Tuesday morning, the Board of Zoning Appeals voted unanimously to uphold the Cleveland Planning Commission’s decision to deny McDonald’s a conditional use permit in Ohio City which would have allowed the mega-corporation to build a restaurant on the corner of Lorain Ave. and W. 38th St.

In the stuffy, crowded meeting room on the fifth floor of City Hall, you couldn’t help but be emotionally rocked by the power — actual, mobilized power — of old-timey neighborhood activists and their political representatives. I’ll reiterate that the proceedings were extremely stuffy.

In one corner: Led by the fiercely articulate and handsomely appointed Bruce Rinker, the McDonald’s team argued that the November 15th Planning Commission decision had been “arbitrary and capricious” and fueled largely by resident opposition. Rinker characterized residents’ testimony as “earnest,” but ultimately “opinionated,” “speculative” and “irrational.”

Rinker either daylights or moonlights as the Mayor of Mayfield Village and a Metroparks Commissioner. Say what you will about him as a real estate attorney, but he pronounces “very well” and “make no mistake” and “with all due respect” like only the most astute of TV’s courtroom litigators. Though it was repeatedly established that the board of zoning appeals was not, in fact, a court of law, Rinker fearlessly cross-examined the opposition, begging the board to acknowledge that McDonald’s had complied with 95 of 96 requirements related to Ohio City’s Pedestrian Residential Overlay (PRO), which was designed to promote and develop a walkable neighborhood.

The 96th requirement — the one area of non-compliance for which McD’s wanted the conditional use — deals with frontage length. Anything longer than 40 feet is a no-no in the PRO. The proposed McDonald’s structure would stretch 87 feet along Lorain.

Residents' testimony once again focused largely on the spirit of the neighborhood and the increased levels of traffic which would be caused by the proposed drive-thru. Ohio City Inc.’s Tom McNair said it was preposterous that McDonald’s, a restaurant whose whole goal as a restaurant is attracting customers — 91 vehicles per hour was the McD’s traffic study’s conservative estimate — could claim that there would be no increased traffic at an already busy intersection.

Both Eric Wobser of OCI and city councilman Joe Cimperman spoke persuasively on the merits of Ohio City’s current development initiatives and long-term goals. Cimperman added that the Cleveland Planning Commission is one of the oldest bodies of its kind in the country, established in 1915, and to suggest that their decision was in any way “fickle” was a serious misrepresentation.

One resident, Mary Triece, twice objected to the way remarks were being framed by Rinker and the property ownership. Namely, that Ohio City and its parcels were being treated merely as property considerations — “We are a community. We walk are dogs. We have children,” she argued — and that resident resistance was being interpreted as a purely emotional response to rational arguments.

The BZA Chair, Carol Johnson, seemed almost bored by the conclusion of the two-hour appeal proceedings, moving to affirm the planning commission’s decision immediately after Rinker and Wobser and co. had exchanged their final salvos.

In one memorable moment, Russell Lamb, a principal at Allegro Realty and a partner in the ownership said that he’d served as a naval officer for 24 years and “never thought” that he’d return (ashore?) to have his rights "trampled upon," to spend so much money on traffic studies and whathaveyou and to still feel discriminated against.

Carol Johnson replied: “I thank you for your service, but it has no impact on this board. You could spend a gazillion dollars and it would not impact this board.”