Skin-mag hopefuls shook it for the camera -- then the naked truth came out. 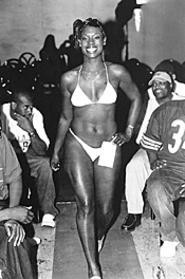 Walter Novak
Not many spectators, but a lot of booty.
The words on the Best Hotel's marquee, "Black Tail HERE TONIGHT," should be stopping traffic. But at 8 p.m., the older woman at the ticket table is drowsing over a paperback Grisham. The 100-plus seats in the ballroom are empty. A few young men mark time on cell phones in the lobby, leering salaciously at every woman who walks by.

By 9:30, there's still no crowd, and even the micro-pimps have broken camp, a sure sign of a shindig on the skids. Only 3 of the expected 35 contestants have shown up. "We cain't have a show wit' three girls," promoter Hubert West says, looking around the lobby with a hint of worry. "But they comin' -- believe me, they comin'."

West and partner Allen Burton are throwing a party and model search. They hope to find the perfect black woman to put Cleveland on the map. But when you combine nudity, money, and dubious motives, well . . . sometimes things don't go as planned.

Black Tail magazine is the poor man's chocolate Hustler, with photos of pretty black women who appear to be bracing for proctological exams. It's less erotica than a primer for parolees who may have forgotten the exact location of female genitalia.

As with its vanilla counterparts, Black Tail sometimes runs issues highlighting ladies from select cities. So local promoters West and Burton planned a party/talent search, in hopes of finding girls with enough junk in the trunk to represent Cleveland properly.

Burton is a fairly well-known promoter of comedy and talent shows, as well as adult events. West sponsors showcases such as "Urban Idol" and old-time Motown-themed revues. They've been friends for three years. Last month's Black Tail party was their second joint venture. Before the event, Amy Singer, a marketing official for BT owner MMG Publishing, said that the company was excited about the proposal, though she admitted to being "sketchy on the details."

As it turns out, details aren't West's strong suit.

Tall, dark, and gangly in his new Hummer H2, hiding twists underneath a Miami Dolphins hat, West talks up his demanding schedule: consultant to Dolphins running back Ricky Williams, tour manager for Grammy-winner Alicia Keys. He says he's a former Oakland Raider and Playgirl model, an Omega Psi Phi and a Freemason, and a three-time Olympic marksman who learned to shoot as a member of the elite Delta Force.

But neither the Raiders, the Dolphins, nor Williams have ever heard of West, and as a result of Scene's inquiries, NFL security agents are on their way to Browns' Town for a word with him. J Records could not confirm or deny his affiliation with Alicia Keys, and there is no record of his Olympic glory or Delta Force service. Who knows whether the Omega Psi Phi and Freemason affiliations are legit -- fraternal credentials are hard to confirm. So is his Playgirl claim: He says he was a "Boy Next Door," in the back of the book, back in the '70s.

Pressed, he'll downgrade his Olympic status to alternate and concede that he was just an Army supply clerk, not a sniper.

"Y'know how niggas are -- they don't understand that shit," explains West. "So I jus' say I was on the Delta Force Team, 'cause on the team is on the team, right?"

Padded résumé aside, he's got just enough charisma and flash to get simple people to buy what he's selling. West claims to own a Bentley, a $3 million Lear jet, and a 10-horse ranch. He's buying Euclid Square Mall and is having a street named after him. Any minute now, he could divulge that he's Batman, and you wouldn't flinch -- the hype is that good. The one thing that can be confirmed is that he's a retired Cleveland teacher, who taught all across the district from '71 to '99.

West says that he spent $7,000 promoting the Black Tail Magazine Model Search & Miss Ohio Autumn Swim Suit Contest. At first blush, it seems to have all the ingredients: hype, swag, and half-naked girls.

Ms. Déjà was the 1999 Black Tail Model of the Year. She and Dream, another BT model, have flown in to sign autographs and tantalize. "Playboy is considered to be upscale and not as nasty as Black Tail," she says, pushing back her blond braids, her all-natural, 44-double-F breasts nearly bouncing out of her black one-piece. "If those girls can be sex symbols, why can't the girls in Black Tail?"

Déjà knows Burton from previous shows, but she just met West and has already had too much of him. He brags about hanging out at his horse ranch with Michael Jordan and Bill Cosby, she says, and told her he "regularly flies out to Vegas for pussy-eating contests." (Later, West modestly confirms his standing as captain of the team and says that he's won a lot of cash prizes, but doesn't have a trophy. Just as well, he adds, because that ain't the kind of thing you put on the mantel.)

Around 10 o'clock, comedian Mo' Payne warms the crowd of 15. "I know it ain't a whole lotta muthafuckas here," says Mo', "but we came out to see some booty, so we gon' turn it out, right?" A guy in a faux-Armani shirt belches a response and gets the biggest laugh of the evening. Mo' Payne's routine groans along predictably -- "Wheah all da' white people?" -- until six girls make their way into the spotlight.

Camilla, a customer-service rep in a tiny pink outfit, works the stage. "My one friend just pumped me up to do it," she says as she pulls at her crotch, where she is apparently hiding Don King from the feds. "I just really need the money." Eboni is a short, dark-skinned private dancer who dreams of being a cosmetologist. "I'm gonna be in my swimsuit," she confides. "I don't wanna be in Black Tail." Champagne Glasses, a thin, dark-skinned young mother with a fake patois and a topographic map of Stretch Town on her tummy, is looking to break into porn. Three late recruits -- White Diamond, Shalira, and Marcia -- stroll in, cool and disaffected.

The girls make their way into the audience, tossing their ample behinds hard to the side for the small but appreciative crowd. There are six cameras and two video recorders among the 15 spectators, recording every move.

West, the only judge, looks down at his tally sheets pensively.

The guys cheer as the girls line up across the stage and prepare for a "dance-off." Camilla, feeling the agony of da feet in her 3-inch heels, takes a step off the platform and -- ka-SMACK! -- takes a fantastic spill. She jiggles and grimaces hard with every bounce, as a tidal wave of laughter and popping flashbulbs rises from the sparse crowd. The music booms as she recovers, snapping her buttocks ferociously, and the guys cheer. The other girls limp down the path with a lot of rumpage but little energy.

While West deliberates, Dream and Ms. Déjà come up to entertain. The men surround the small stage, throwing one-dollar bills. Dream is listless and reserved, barely there in a bad way. Ms. Déjà, however, aims to please. As her mammy-jammers jump ship, men stare in awe at the spectacle of breasts large enough to feed Somalia. The two gather up the singles and regroup.

The contestants form a line onstage, and Mo' Payne announces the winners. Marcia, a sometime stripper and nursing assistant, takes third place. Shalira, the makeup girl half an hour ago, is the second-place winner. Camilla, the tumbler, takes the $500 top prize.

The contest retires to room 214, where the winner is to get paid, and the other girls can get naked and compete for a chance to be in Black Tail. Spectators follow and pay extra to watch.

But when West arrives, he has a surprise: The $500 prize will be divided among the top three. Shalira and Marcia are excited, but winner Camilla and a friend confront West privately and then cuss a blue streak all the way to the parking lot, assuring him that he'll hear from a lawyer in the morning. West throws up his hands. "What am I supposed to do?" he asks. "She ain't got no vision -- she could be a star. Bitchin' about the prize, she cost herself a career. I gave her $200. If she don't like it, she can sue me."

After watching the exchange, most of the nude-model hopefuls leave. Champagne Glasses becomes the star of the show. Pissed, the spectators depart as well, and only West, Burton, someone named JD, and a guy who looks like a conked Curious George in a Travolta suit remain. JD checks his hi-top fade in a wall mirror before settling in for the festivities.

The flier promised the nude model $1,000, a professional photo shoot, and a trip to New York. But there's no cash -- West says he'll make sure she gets it later -- and the Black Tail photographer supposedly didn't make the plane. Champagne couldn't care less. So Burton grabs an old Polaroid and gets to clicking. She stretches out on a foldaway bed, as Curious George looks on, sweating like a slave.

In 10 minutes, it's over. She gets dressed, leaving with a few flicks, but nothing else.

"Sharing the pot was the fairest thing to do," Burton says later. "The event was purposeful, and hopefully, it will help point these girls in the right direction in this business." Aside from the fact that hardly anyone showed up, Burton thinks the contest went well.

Miss Déjà says later by phone that the show was "bullshit": Turnout was horrible, the winner didn't get her prize money, and because none of the girls would sign releases, the search was a bust. As of this writing, no pictures have been sent to Black Tail, and no one seems to know what became of Champagne. Suffice it to say that she never got her $1,000 prize or her trip to New York.

But girls aren't ever flown to NYC for shoots, says Déjà, because there are too many girls trying to get into BT as it is. Those who do pose are paid $500, if that.

Déjà says that the Cleveland event has besmirched the Black Tail brand. She won't be working with West again.

Well, at least she got a ride on West's private jet, right?