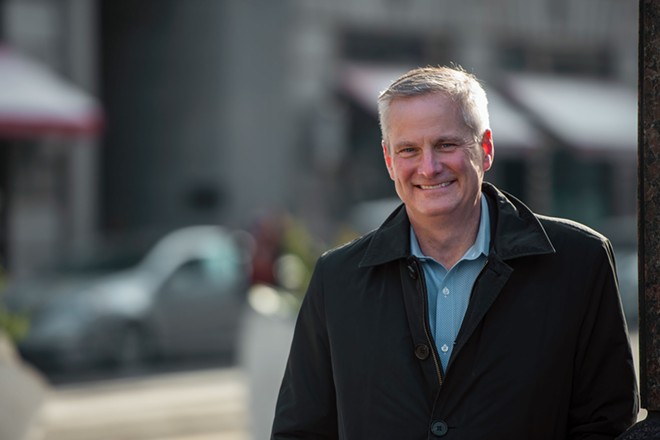 Weingart took office in 1995, at the tender age of 28, forsaking the law firm of Jones, Day, Reavis & Pogue to do so. He was and remains a card-carrying Republican, and he lost his re-election bid after one term, as Bill Clinton swept the county by 175,000 votes in 1996. (Weingart is quick to mention, however, that he only lost by 30,000 that year.)

Now, after nearly twenty years running his own lobbying firm in downtown Cleveland, Weingart says he plans to run for Cuyahoga County Executive. In a press release, he announced that he'd be filing paperwork at the Cuyahoga County Board of Elections later Wednesday.

He told Scene in a recent Zoom interview that he's going to devote the next 20 months to the campaign and noted that if he wins in 2022, he'll return to public office twice as old as he was when he won the first time around.

For Weingart, the mismanagement of the Armond Budish administration  inspired him to seek office. In no particular order, he referenced the county jail scandal, the ongoing corruption investigation, the fiscal missteps related to Covid-19 and the misappropriation of CARES Act dollars.

"This county government is in disarray," he told Scene. "We thought a new form of government would solve the problems of corruption and transparency, but what I'm seeing is a county that's more corrupt and less transparent than it was a decade ago."

Weingart said he wants Cuyahoga County to be "government for the people, not government for itself." He said he plans to deploy some of the same strategies that were effective back in the 90s: dramatically decreasing county costs by reducing non-essential spending and bureaucracy, and using the surplus to fund community projects and economic development initiatives.

The policy planks of his platform — summarized in a one-pager attached below, titled "Cuyahoga 2030: Rebirth of a County" — emphasize what he referred to as competent fiscal management. Not only does he want to trim the county's payroll via attrition and voluntary buyouts; he wants to put every county contract and county salary online for the public to see.

When Scene asked how his cost-cutting measures squared with the region's high unemployment rates — the County itself representing a major employer — Weingart said that attrition and voluntary buyouts were designed to target those of retirement age or very close to it. "The goal is not to fire anyone," he said. And his vision is that the savings will flow directly to community projects, managed largely by local nonprofits. In theory, this will create more jobs than the county loses at its headquarters. When Scene questioned whether his pursuit of efficiency would result in the same jail scandal that Budish oversaw with his quest to turn the jail into a regional profit center, Weingart was definitive: "No. There are some costs you can cut and some you just can't."

Unlike many Republicans, Weingart balks at "law and order" rhetoric and says he supports criminal justice reform on both the front and back ends. Moreover, he said he's suspicious of plans to rebuild the county jail.

"We need reforms that keep people out of jail," he told Scene. "Non-dangerous arrestees should never set foot in the jail. We need to speed up arraignments, promote alternative sentencing and have faster trials to process people more quickly." He said he's interested in creating programs using models like EDWIN's to create employment pipelines for ex-offenders, and he supports the creation of a dedicated county expungement court.

"Look, I don't have traditional Republican ideas in some areas," he said, "but I still have an R in front of my name, and I'll have to overcome that label in Cuyahoga County."

In order to do so, Weingart says he'll have to raise quite a bit of money. He has set the ambitious goal of $3 million, but said he has spoken to more than 250 people about his campaign and has received commitments that give him optimism.

He believes, he said, that the flagrant misdeeds and nonstop scandalous headlines of the Armond Budish administration should demonstrate that the County Executive position is not partisan.

"You don't need to be a Democrat to be the county executive, even in a Democratic county like Cuyahoga," he said. "More than anything, the position calls for someone who understands county government and who has a vision. This county also needs a spokesperson, someone who's unafraid to come out and say it like it is."

Weingart, who lives in Shaker Heights, said that his economic development strategy would focus on attracting jobs to the city of Cleveland, closer to where the most people live. He said that new jobs remain the best way to attract more people to the region and to prevent the migration of the county's most productive people. He even floated the idea of asking Gov. Mike DeWine to send some state government jobs to Cleveland, "to spread the largesse around."

Attracting jobs was one of four pillars of Weingart's first campaign, back in 1994. Alongside jobs, Weingart won the seat on promises to reform welfare, make the government more efficient and not raise anyone's taxes.

His pitch in the 2022 race will be derivative, with similar priorities about efficiency. But this campaign will also be inflected with criticism of the incumbent Budish, and policies that that he sees as countermeasures to Budish's failures.

"I believe that government ought to be run on the principles of persuasion, reason and facts," he told Scene. "What I'm seeing in this administration is government run on coercion, leverage and misdirection. I want to bring back honest government."