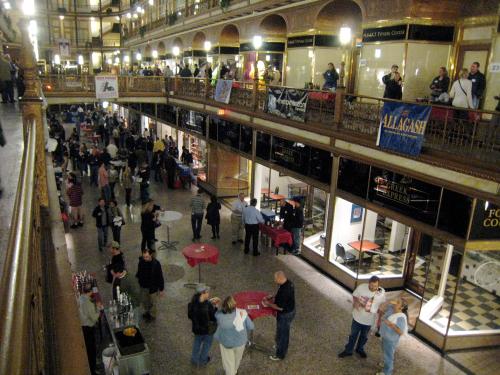 The organizers of Cleveland’s first (and hopefully not last) Beer Week deserve a round of applause. Beginning Friday, October 16, and ending this past Saturday, bars and restaurants around the city came together to celebrate ales, lagers, stouts, barley wines and everything in between. The week showcased our favorite alcoholic beverages with events ranging from rare brewery tastings to multi-course dinners paired with exotic brews at some of the city’s most popular restaurants. The final event of the week was the organizers’ crown jewel: Brewzilla featured over 50 beers for the sampling. For $50 each attendee received a mini three ounce mug for tastings, 20 taste tickets, and three food tickets.

Stands were located throughout the first floor of the Arcade, with volunteers generously providing samples to the several hundred beer aficionados making their way around. All of Cleveland’s breweries were represented, including Great Lakes, Buckeye Brewing, Brew Kettle, and the city’s newest gem, Indigo Imp.

Two of my personal favorites were the beers from Traverse City, Michigan’s Jolly Pumpkin and Chicago’s Goose Island. Jolly Pumpkin brews sour beers, which is a very polarizing technique. Either you love it or hate it, but if you like sour pickles chances are you’ll like Jolly Pumpkin’s beers. Normally Goose Island wouldn’t be in my list of favorites at a beer tasting, but the brewery brought some reserve bottles of Maltida and Sofie to the tasting, and both were outstanding.

As the night wore on the crowd and Arcade did start to get a bit sloppy. The ground got sticky, and there really wasn’t anywhere for people to sit and relax. The little bit of food that was available didn’t do enough to cut the alcohol, although Heinen’s soups and cheeses, and the Winking Lizard’s hot pretzels and bratwursts certainly helped. Bottles of water were also freely available. Overall, though, Brewzilla, and all of Cleveland Beer Week, proved to be a welcome event, and hopefully Beer Week can continue on annually. — Aaron Mendelsohn