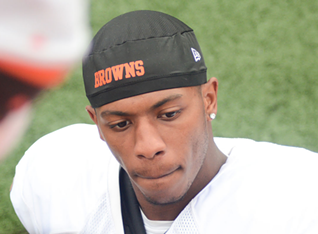 Wikipedia
Justin Gilbert
The Cleveland Browns have been bad at a lot of things since their return to the NFL in 1999, but it’s the team’s baffling ineptitude at selecting players with a modicum of talent in the NFL Draft that has, by far, been their worst subject. Jimmy Haslam may be a crook, Ray Farmer may think you can win without wide receivers and Mike Pettine may have an unhealthy love affair with Josh McCown, but some good old fashion football players can trump even the most self-destructive regime. Just look at the 2015 Oakland Raiders. As our friends at the A to Z podcast like to say, you need Jimmies and Joes before Xs and Os.

Unfortunately, that hasn’t been the case here in Cleveland, no more evident than the inability of Johnny Manziel and Justin Gilbert, last year’s high profile draft picks, to even see the field. (Yes, JFF played a good game yesterday.)

Calculating a player’s snap count over the course of a season can be a good indicator of a draft’s success. If a player is seeing more snaps, it should mean the coaching staff trusts him, or he’s performing on the field.

Snap count stats can be skewed, of course, by a handful of factors. A bad team may have no choice but to play its recent draft picks because they have no other options. A good team may not be playing its draft picks because there are better, more experienced veterans in front of them and said team is afforded the time to bring those picks along slowly. Draft picks who should be on the field can be injured, and draft picks who shouldn't be on the field can land there when the guy in front of them gets injured. Guys that should at least get a look-see might be inactive week after week or on the bench because the coach doesn't like who the GM drafted. And/or guys that shouldn't get a look-see might be inactive week after week because the coach knows the GM drafted badly. There are also teams that go through wholesale roster changes because last year's suckitude is shuttled out the door as new suckitude comes in, last year's garbage giving way to this year's garbage. Those last three, you well know by now, are at play in Berea.

Regardless of all those factors, after a couple years, the cream usually rises to the top, and draft picks worth their salt should start seeing the field on a consistent basis.

We decided to break down the total number of snaps (offensive, defensive and special teams) played by every team’s first, second and third round draft picks since 2012, that fateful year the Cleveland Browns selected Brandon Weeden and Trent Richardson. Here are the results, as rudimentary as they are:

As you can see, some teams, like the Cleveland Browns and St. Louis Rams, are higher than you’d expect. There’s a reason for that. The Rams earned a bevy of draft picks when they traded their no. 2 overall pick the in 2012 draft to the Washington Redskins so the latter could select Robert Griffin III. Surprisingly, the Browns have had the same amount of draft picks, 16, as the Rams over the same period of time. So we decided to break down the average snaps per draft pick of each team to give us a better look at the production team are, or aren’t getting from the amount of picks they’ve had

Average Snaps Per Pick Since 2012

Ah, that’s better. The Browns jump from sixth highest in overall snap count to ninth lowest in terms of average snap count of those 16 draft picks, who’ve played an average of just 1,072 snaps. The Oakland Raiders, who, up until this season, may have been the only team run worse than the Browns, nab the top spot here. The forever atrocious Washington Redskins are up there too.

There’s still some anamolies. The Denver Broncos just haven’t had that many draft picks since 2012. Ditto for the Green Bay Packers. The Tampa Bay Buccaneers actually come in fourth highest with an average of 1476.27 snaps played by each draft picks, a sign that guys like Mike Evans, Jameis Winston and Austin Sefarian-Jenkins are imporving at a rapid rate. And despite their recent struggles, the Indianapolis Colts killer 2012 draft, which resulted in Andrew Luck, T.Y. Hilton and tight ends Dwayne Allen and Coby Fleener, land them in them top spot.

As for the Browns, players like Joel Bitonio and Mitchell Schwartz have been on the field quite a bit, which skews just how fruitless picks like Gilbert have been.