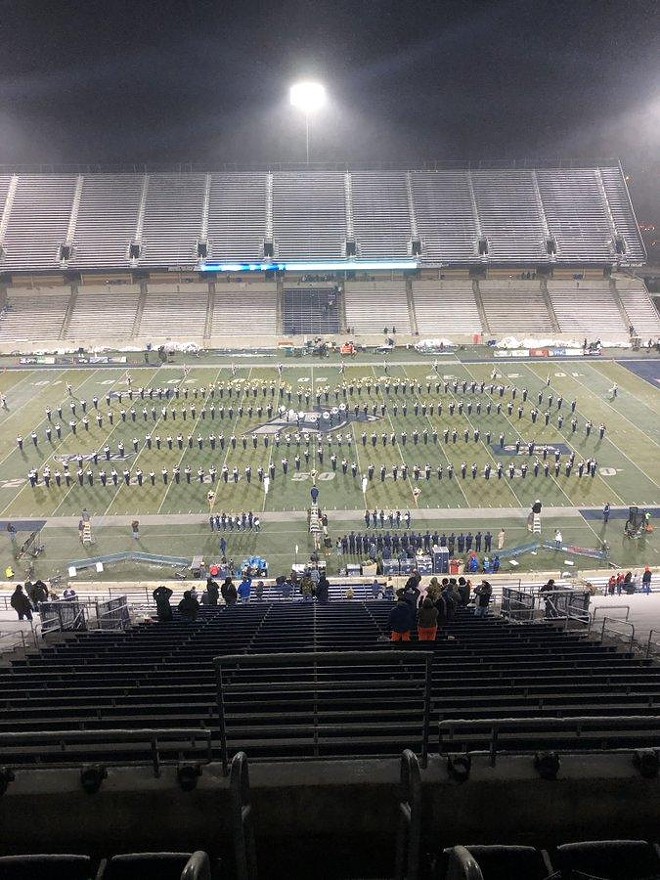 Peter Pattakos
The University of Akron’s maintenance of a Division I FBS football program was hard enough to justify even before last week’s announcement of another round of budget cuts calling for a 20% reduction of all non-academic administrative expenses at the debt-ridden institution. Last November, the Beacon Journal published a column by Bob Dyer taking stock of the program as it was set to complete its first winless (0-12) season since Otis Douglas’s boys went 0-7-2 in 1942. Dyer penned the column after attending a home game against Eastern Michigan where “exactly 54 people were in the stands” of the 30,000-seat Infocision Stadium, the “monstrous” $71 million facility that has seen 25 home wins during its 11-year existence ($2.8 million per victory), with 9 of those wins coming against sub-FBS competition.

I attended the next home game with my family two weeks later, the season finale—a Tuesday night matchup with Ohio University pursuant to ESPN’s plan to sell nationally televised football on every day that passes between the end of baseball season and the new year. My wife’s cousin, a UA senior, played trombone for the University’s excellent marching band, and it was senior night, so we were joined by a few hundred others in the stands, most of whom were also related to the football players and band members. At one point during the first half, the officiating crew stopped the game for a long delay before announcing that the band had to stop playing while the play-clock was running. This prompted a round of passionate boos from the crowd, which shortly morphed into cheers in support of the band that lasted for the rest of the quarter. The band was duly inspired and it was exciting as things got, by far, in the 52-3 Zips loss.

Five years ago, after the University cut 215 staff positions and its baseball program, faculty members spoke out against the University’s annual $8 million commitment to the football program, which even then maintained the lowest attendance of all 130 NCAA FBS programs and otherwise offered “little financial return on the investment.” William Rich, the University’s Faculty Senate chair noted at the time how “difficult” it was “for people [who made] the decision to invest” so much money in the new stadium to “then acknowledge that it was a mistake.” “But sometimes that’s what responsible adults have to do when they make a mistake,” Rich said. “They acknowledge it and take steps to fix it.”

A few years later brought the “cynical” and “ham-handed” spectacle of Zips football players being dragged down to South Carolina on Thanksgiving weekend to play “the most meaningless game of [2018],” which was scheduled only weeks before to make up for revenues lost when a trip to Nebraska was canceled due to bad weather. And now, in the wake of the winless 2019 season and the most recent round of budget cuts, even the mild-mannered Terry Pluto—an institution in his own right—is calling for the program to punt on its Division I status. “They have to ask tougher questions now,” Pluto told WKSU, “and sometimes you have to humble yourself and say, ‘What really did football do for the MAC?’”

Other such tough questions likely relate to the parallels between the football program and a University administration that’s abandoned its focus on academics and the community in pursuit of profits and a national profile that hasn’t materialized and likely never will. Even the faculty “acknowledges that football is beloved in the state of Ohio and … has a place at the university.” Its recommendation—joined by Mr. Pluto and the American Association of University Professors—is only that the program drop a level, from the FBS to the Football Championship Subdivision, which would remove the it from the Division I arms race and place it on more realistic footing.

There’s no reason that the University of Akron can’t sustain a downscaled football program that the students and community can be proud of, as opposed to the current arrangement where these kids serve mainly as grist for the televised-football industrial complex. In what new University President Gary Miller has called a “defining moment in the history of the university,” requiring “rapid, positive and dramatic change,” pursuing reform on this front should be an easy call—especially with so many other struggling FBS programs with an incentive to do the same.
Scroll to read more Cleveland Sports articles
Join the Cleveland Scene Press Club