From the Barons' failure will come a better circus. 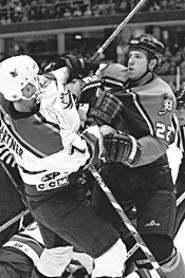 Only Omaha had worse attendance than the Barons, and that's not even in America, is it?
The signs of doom were evident on opening night five years ago, when the American Hockey League arrived at the Gund, bringing some of the world's best young players to Cleveland. There to witness it was a crowd the size of an eight-year-old's birthday party -- and an ocean of empty blue seats.

Still, it was easy to envision better days ahead. Though the Cleveland Barons were born in the wake of the Lumberjacks' collapse, they would be run by their NHL parent club, the San Jose Sharks, not the rodeo clowns who owned the Lumberjacks -- one of whom left the country with creditors in hot pursuit, while another tried to kill the team in midseason.

Alas, those better days proved timid, rarely showing their faces. Five years later, the Barons still play before that sea of vacant blue, which can neither cheer nor buy tickets.

Last week, the team announced the inevitable: At season's close, it's bailing for Worcester, Massachusetts. Once again, Cleveland's hockey team has filed for divorce.

It's been a curious relationship. Though by no means a national sport, hockey's marriage to the Rust Belt spans more than 50 years. NHL teams from Philly to Minneapolis often outdraw the NBA. Detroit, which closely matches our demographic DNA, is known as Hockeytown USA.

So one might presume that Cleveland would see the allure of crazy white boys ramming each other at high speeds -- men who don't speak of themselves in the third person, don't take two weeks off when they get blisters on their fingers, don't squawk like trophy wives when the commissioner won't let 'em wear jewels.

Yes, one might think this would be Cleveland's sport -- football on ice, an off-season substitute for the Browns.

But one would be wrong. Time and again, monied men have made that bet. Each time they walked away as children of a lesser wallet.

It's hard to blame the Barons. From the beginning, they fought uphill. Home was the cavernous Q, which seems intimate when the Pistons are in town, but does a fine impression of an airplane hangar for smaller acts. Hockey, like football, is meant to be witnessed in the spirit of St. Paddy's Day, with much shouting, spilled beer, and high fives all around in section 213. But with a minor-league game playing to the Q's major-league prices, Mr. and Mrs. Cleveland needed a second mortgage just to split a popcorn. Forget about bringing Junior and Little Susie, unless you wanna sell the car.

It's also hard to expect big-league fans to cherish a Triple-A team. When you can already pay to see Shaq, Ray Lewis, or The Big Unit, the arrival of Jiri Hudler won't send you to the ATM. (Never heard of him? He's the AHL's leading scorer.) So it's no coincidence that Wilkes-Barre, Hershey, and Rochester are among the AHL's attendance leaders. Tickets sell much faster in towns where the only alternative is watching Jimmy Pulaski, who rolls a 260 in the rec bowling league.

All of which led to thin crowds and the vibe of a proctologist's office. This season, the Barons' average attendance is just 3,172, second to last in the AHL. Only Omaha is worse, and that's not even in America, is it?

Barons brass could likely amplify this tale of woe. In previous times, President Michael Lehr was a ready well of optimism. Now he's not returning calls, nor is the team's departure acknowledged on its website. If you've professed your love to another, it's wise to keep silent around the one you're with. There are tickets yet to be sold. The jilted aren't prone to rewarding rejection.

But Cavaliers President Len Komoroski is happy to talk. Though he speaks the mysterious tongue of the corporate marketeer, which can be as cryptic as Farsi, he seems to see the Barons' misfortune as his opportunity.

Komoroski was the Lumberjacks' president during their glory days, when they were capable of pulling in 10,000 a night. It was the 1990s, and though hockey remained the city's fourth-class sport, on 40 winter nights it offered an adrenaline shot to the downtown economy.

He won't speak ill of Barons management, but you can tell he views sport through a ringmaster's eyes. While the Barons were largely content to sell the game itself, Komoroski uses phrases like "dynamic entertainment environment." If you've been to a Cavs game, you understand the translation: dancing fat men, mascots on trampolines, sparsely dressed women shaking it for the courtside seats.

A purist might have something to say to Komoroski, something best expressed with a brick. But the man understands the modern selling of sport. It's not enough to have LeBron on the marquee. You need something blaring, prancing, dancing during every break. You need a spectacle to make people forget they're watching a 20-point blowout, or that they just paid 60 bucks to see the Atlanta Hawks. Whether the game was good or not, it's his job to make you return. He's very good at it.

Hockey can work in Cleveland, he believes. It just needs a ringmaster's touch. "Ten years ago versus now, the hockey market has exploded," Komoroski says. He ticks off the ingredients: more rinks, more youth programs, more people playing in Cleveland than ever before. Rules changes have made the game faster, with higher scoring. Throw in some dancing fat men and flying mascots, and he can see those 10,000 nights once more.

Though it's too early to tell, Cleveland should be with him. His success will decide whether more than 300,000 people unload their money downtown each winter, or whether they blow it at an Applebee's off a freeway ramp somewhere.