Calling for All Turkey Bowl Stories... 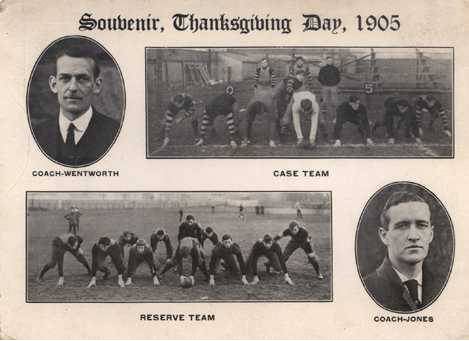 This was the first year since I was 15 or so that I did not play in a Turkey Bowl. Sad, I know. Our regular game looks like it finally may have fizzled out completely after slowly fizzling for the last few years. Perhaps it was because fewer and fewer friends were returning to Cleveland for Thanksgiving every year; perhaps it was because we're all damn close to 30, out of shape, and lazy.

It started as a congregation of guys who were on the debate team at St. Ignatius — I know what you're thinking and, yes, it was just as athletic and graceful as you would guess — along with some friends of friends. It grew to include some people who could actually pass and catch a football with some regularity, and games ended up lasting a couple of hours or more. And just as quickly, it seems, the athletic people stopped coming and the game shortened to whatever amount of time it took to justify to yourself putting on eight layers of clothes and getting covered in mud and snow. Once that magical benchmark was hit, it was time for lunch.

No more. I got an invite to play in another Turkey Bowl this year but passed. It snowed, I was hungover, and, to be honest, it wasn't my game. The joy of the annual tussle is the familiarity of it all — the running jokes (we have a friend that we nicknamed "The Pylon" because that's about all he was good for), the heated rivalries (no one liked "Chop Block Guy"), and the affirmation that you're not completely out of shape yet because your friends are still woefully slow (sprinting past a diminutive astrophysicist with a Jew-fro will make you feel like Barry Sanders).

Anyway, I'll throw the offer out there: If you have any good Turkey Bowl stories you can e-mail me at vgrzegorek {at} clevescene {dot} com and I'll collect them and put 'em in a future blog post.

Two quick stories from our games:

1. My Failed Chad Johnson Imitation: Must have been when I was still in high school. I returned a kickoff for a touchdown, as I was wont to do those days before I got fat and slow. We played in the Metroparks and the end zone I was rushing towards backed up to the gravel parking spots. Upon reaching the goal line I decided I would celebrate by running up on the hood of a car. Bright idea with wet shoes and a wet car. Predictably, my first step onto the vehicle was an unstable one, sending my right leg sliding up the side of the windshield and the rest of my body plummeting to the ground below like the worst possible pummel horse accident you could imagine. Sat out the rest of the game. Surprised I didn't break my leg.

2. Forget the Porcelain God, Try Hart Crane: Our game eventually moved to the field behind the Kelvin Smith Library on the campus of CWRU. A friend of ours had a propensity for showing up at the game disastrously hungover. Combine that with his tendency to vomit during any physical exertion, sober or inebriated, and you can see where this is going. One fateful year he must have made at least a half-dozen trips to this statue, which is just behind the library, to vomit all over the base of the Hart Crane statue. Who is Hart Crane? 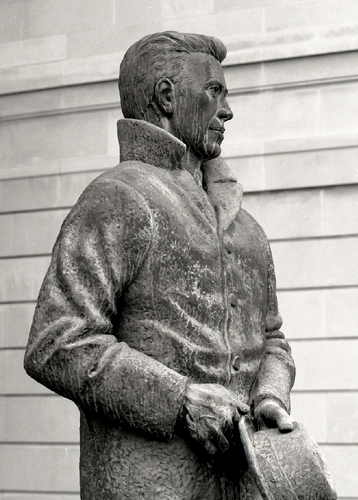 Statue honoring the poet Hart Crane, located along the north wall of Kelvin Smith Library. The sculpture was executed in 1985 by William McVey, whose likenesses of leading figures and other works can be found in several locations on campus as part of the Putnam Collection and in major museums nationally and internationally. Crane was born in Ohio and grew up primarily in Cleveland, living for a time in the University Circle area. He died in 1932 at the age of 33, leaving a body of lyric poetry that remains popular today.

I like to think the Turkey Bowl vomiting episode will have the same lasting legacy as the estimable Mr. Crane.