Cavalier Lance Allred never plays. But what other rookie grew up in a cult and is writing a Jane Austen satire? 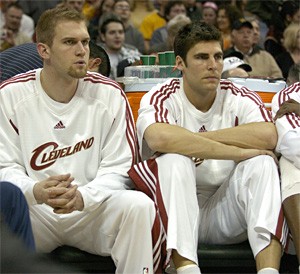 Walter Novak
Wally Szczerbiak might play more, but Lance Allred has three books in the works.

The game is over. With 18 seconds left, the Cavaliers are down 12 to the Orlando Magic, and have officially entered Garbage Time. Finally ready to accept defeat, Coach Mike Brown motions toward the end of the bench, where 6-11 rookie Lance Allred slips off his warm-ups for the first time in several hours. By the time he launches his first career shot — a jumper that barely grazes the rim — much of the crowd has already filed out.

Just six days ago, Allred was the starting center for the Idaho Stampede of the NBA Development League, basketball's version of the minors. But on March 12, the Stampede were in Salt Lake City, Allred's hometown, for a game against the Utah Flash. As he drove to his parent's house for pre-game dinner, he got a call from his coach, who told him he'd been offered a 10-day contract with the Cavs. Allred turned around and drove back to the arena, where the Stampede's owner asked him to pay back his per diem — the $30 in spending cash D-Leaguers are given each day of a road trip. Allred pulled $60 from his wallet and went on his way.

On the Stampede, Allred was a captain, the leading rebounder, and an All-Star. Now he's an insurance policy — a warm body to fill out the roster and occasionally take the floor to protect the team's regulars from injury. The lack of playing time has its upside: the $25,000 he made during his first 10 days was more than double what he made last year with the Stampede. It's a lifestyle change made obvious during his first night on the team plane, when he watched a teammate lose thousands in a card game.

"They asked me if I wanted to play," says Allred, sitting in the team lounge before a recent game. "I told them that's more than I make in a year."

But more than his portfolio separates Allred from his new teammates.

A devout Mormon, Allred grew up on a polygamous compound in Montana. His family moved to Salt Lake when he was seven, and broke away from the extremist sect six years later. The transition was especially hard on Allred, who was born with a severe hearing impairment. Although his hearing had improved thank to aids, lip reading, and years of speech therapy, he still heard only 75 percent of what other kids could.

Self-conscious about his speech, Allred found outlets in reading and writing, and reveled in listening to stories told by his dad, a high-school history teacher. It wasn't until 8th grade, after a six-inch growth spurt, that someone suggested he take up basketball.

But his skill quickly caught up with his size. As a high-school senior, Allred won Utah's player of the year award. His college decision was easy: His hometown University of Utah Utes were recent runners up in the national title game, and Utes coach Rick Majerus had a reputation for turning his players into NBA draft picks.

But even in the autocratic realm of college coaching, Majerus was a notorious bully, and during Allred's two years at Utah, he was a frequent target. In 2004, he told a Salt Lake newspaper that Majerus had called him a "disgrace to cripples," a claim backed up by two of Allred's ex-teammates. And one day, as punishment for some now-forgotten offense, Majerus ordered Allred to be tested for a learning disability.

Allred was anything but disabled. He'd aced the ACTs. After 10 minutes of questions on the special-needs test, the woman testing him asked what he was doing there. "So I told her," he says. "'My coach wants to humiliate me even though I have the highest GPA on the team.'"

After two years at Utah, Allred transferred to nearby Weber State, where he earned All Big-Sky conference honors and graduated with a double-major in English and history. Undrafted, he started his pro career overseas.

"For a lot of players going overseas can be intimidating," says Allred. "But for me, a European history major, it wasn't."

But the promises offered by the European clubs proved empty. In Turkey, he signed a contract for $100,000, he says, but was never paid. When he threatened to sit out until his contract was honored, his owner responded by sending a taxi driver to his hotel to take him to the airport. After a short stint with two French teams and one in Spain — where he says his team refused to pay for knee surgery — he flew back to Utah, paid for the operation, and found himself $30,000 in debt.

"I was about to quit," he says, "thinking maybe this isn't what I'm supposed to be doing and maybe I'll just go be a high-school history teacher like my dad."

Instead, in 2006, the Stampede's coach convinced Allred to sign with Idaho. He started as the fourth-string big man. Then, in the span of a week, everything changed. The team's starting center broke his leg, the back-up was called up to the NBA, and the third-stringer — the final man standing in Allred's path to the starting job — signed a contract to play for the same Turkish club that stiffed Allred. In the D-League, Allred has learned, opportunity always comes at someone else's fortune or expense.

Allred turned the opportunity into a year-and-a-half of solid production and an NBA contract — the first ever for a deaf player. And on Tuesday, with Ben Wallace's back ailing and Daniel Gibson still sidelined, the Cavs re-signed him for another 10 days.

As temp-work goes, it's a dream gig. On top of the $25,000 per 10-day deal, Allred's road-trip per diem jumped from $30 a day to $106. In Boise, each Stampeder was given one pair of sweats for the entire season. At the Cavs $25 million training facility, Allred was encouraged to take what he wanted. He froze and stood in the equipment room for 10 minutes, he says, before taking a step toward the swag.

"I walked over to pick up a shirt and looked over my shoulder," he says. "It felt like stealing."

Between practices and games, Allred still escpapes by reading and writing, in ways perhaps no other NBA player does. Around the locker room, he carries an Oxford professor's book on the Crusades, research for a historical novel he's writing about the 14th Century Battle of the Golden Spurs, between the Flemish and the invading French. He's also at work on a memoir and a "Victorian satire," inspired by his distaste for Jane Austen's Pride and Prejudice. "I'm a Dickens man," he says.

And when asked for a historical figure whose situation is analogous — undrafted D-Leaguer to hopeful NBA bench-warmer — Allred reaches back to 11th Century England, when William the Conquerer sailed across the English Channel to fight off would-be successors and claim his throne. And although it's not exactly a throne he's after, and his goals extend far beyond basketball, Allred knows exactly where he stands on his journey.

"I'm crossing the Channel," he says.